The Scars Were Faded, But I Realised That His Love Was Still Alive

A hatred that murdered a relationship but couldn’t murder the love within, the love that had the power to go beyond the boundaries of religion to save humanity, to save lives.

Hiding behind an iron staircase, of a shop, I was trying to protect myself. They were on the roads, roaring harshly, with blood in their eyes and all over their bodies, the blood of my fellow citizens….and unfortunately, theirs too.

They were killing people who were born Hindus, because some Hindus somewhere had killed a Muslim who had reportedly raped a Hindu girl. This incident had given birth to riots all around. Many shops were set on fire, many people were killed, many were injured and many, like me, were hiding to survive.

One man, ran towards me, roaring with fire stick in his hand. He had probably seen me. My heart stopped, and in spite of trying to run away, my feet were glued to the floor out of anxiety. In next few seconds he burnt the shop, behind which I was there. It took some time for me to understand that his target was the shop with the label ‘Ganpati auto garage’.

I began to shout with anxiety, but my voice was tiny in front of the sound of the bursting shop. Fire and ash occupied my sight completely. I felt burnt, and by reflex I began to run away from the heat. I wasn’t fully conscious, due to an attack of shock, fear and heat stroke. I suddenly smashed against a man and fell down.

When I opened my eyes, I found myself in a room with off white walls. I rotated my eyeballs all around in surprise to check the place where I was. There were framed pictures of the holy Islamic pilgrimage to Mecca, the Hajj along with some framed sheets of paper having something written in Urdu over them, on the walls. I was surely in a Muslim’s house. The picture of the riots in the city and the fire that I had faced just before getting unconscious, peeped into my memory. My heart began to throb at a stronger pace. I was in a danger, and I wanted to run away. Thoughts of getting raped or killed started haunting me. I ran towards the door, and tried to open it but it was locked from outside. I searched for open windows, but all windows were sealed. I began to shiver out of anxiety. Shouting was not an option as it may let the Muslims outside, aware of my conscious state and they may come inside and kill me.

I needed to find an escape and while searching for it I found a photo frame placed on a table. I knew the man in the photo. It was Javed. The man whom I loved in my college days, and he loved me too, but the boundaries of religion separated us irreversibly. He fought to marry me with his family and I fought for him too, but we were left with an option to leave our families forever if we wanted to be together. We could not sacrifice our parents for our love and hence ended up our relationship with a broken heart that could never be repaired.

My parents fixed my marriage with Abhinav and tied me in a bond with him within few days, as they were afraid that I might get weak and run away with Javed.

Four years had passed since then. I never looked back. I never tried to find out whether Javed had moved ahead in life or not.

I could hear someone heading towards the room. I silently got settled on a chair. I felt safer as I knew it was Javed’s house. Javed entered inside and closed the door again.

He had become leaner and silver strands were shining in his head. He looked tired, old and messed up. The last I saw him, four years ago, he was very handsome, with a glow of youth on his face, and a fitter masculine body. Now he seemed as if he had lived decades in these four years and had grown up many folds.

He came closer and sat on a chair near me.

“You fainted. How are you now?” He began the conversation. His voice was deeper than ever.

“Don’t worry, you are safe here.” He understood that I was threatened.

The atmosphere was filled with awkwardness, anxiety, past memories, unasked questions, regrets, broken feelings and silence.

“Things will settle down soon, till then you can stay here if you wish to.” He said to break the silence.

“No, I can’t stay here. I need to go back to Pune tomorrow morning. Abhinav is alone there. I just came to meet my parents here and got stuck due to riots.” I cleared my schedule.

He didn’t reply and went out of the room. He came back with a plate having a sandwich in it after few minutes. He pushed the plate towards me. I hadn’t eaten anything since I left my home, hence I was really hungry. I ate the whole sandwich speedily.

“I will arrange a cab for you that can safely drop you home. It is a Muslim area so you please don’t step out alone, it is risky.” He spoke in a worried tone.

I noticed there was noone in the house.

“You were running fearfully and there was fire all around. I was just walking on that road when you smashed against me and fell on the floor. I brought you here because there was no other safe place around.” He explained.

A Muslim had saved me from other Muslims. Who says that religion is the reason behind riots. It’s all about the way you understand issues. It proved humanity was above religion……or maybe be our love was above the religious hatred.

I really wanted to know that he saved me due to humanity or the love we had!

“City is getting murdered out of the similar reasons that murdered my inner self one day.” He murmured.

His words poked all the queries I had within me, and I got an urge to ask him whether he had forgotten whatever we had and moved on or not.

“Life goes on Javed….time doesn’t stop…and things change with time…..and so do we.” I spoke.

He looked straight into my eyes now.

“But love doesn’t.” He spoke as a declaration.

“True….but its ache fades away with time.” I clarified.

“When you fell on ground and the Muslims behind you with swords and riffles ran towards you to kill you, I was afraid for you as if they were out to kill me – my hear ached. They were my fellow men, yet I was afraid of them that moment. I believe it was love…the love I always had for you. If it had faded away…it wouldn’t have ached within me.” He spoke in a single breath.

“So you saved me because of love?” I asked immediately.

“If someone else had collided with me, I would have saved him too. But the fear about an attack over him wouldn’t have ached within me, I wouldn’t have become anxious. Saving a human is humanity; beyond that…it is love.” He said in a hushed voice.

He had satisfied all my queries…all questions asked and unasked was answered.

Suddenly his phone rang. He picked it up and within few seconds he hung it up.

“Your cab has arrived. The driver is my friend and will drop you safely.” He said with his eyes digged in his phone.

I got up and packed all my belongings. He opened the gate and let me move out. There was noone in the house.

“Did you marry?” I asked. This time my eyes were on his, and he was closer to me as before. I could smell his body odour. I remembered it, it was the one which I used to love when I used to hug him when we were in love….

“Couldn’t find your substitute. But I am searching for one partner now who can understand me.” He replied softly.

“All the best…..you will surely find the best one….soon.” I said with a smile.

I moved out of the exit gate. He protectively made me sit on the back seat of the cab. He closed the door and smiled.

The cab began to move and soon he was out of my sight. The whole way I could see burnt shops, injured people and scared faces. Religion was killing people now…..just like it killed a relationship four years back….which still had scars over our souls….and these riots will also leave behind similar scars….scars that can never be healed….reversed ….or vanished.

A hatred that murdered a relationship but couldn’t murder the love within, the love that had the power to go beyond the boundaries of religion to save humanity, to save lives. It had the power to move ahead in life with a smile, and did not believe that a marriage is needed to secure love forever, and neither that which insults the institution of marriage by not accepting someone as a life partner.

I kept on reliving my past the whole night. Next morning when I came out of my room, Abhinav was there waiting for me. He had got the news of riots in the city and hence he came to take me safely to Pune. I looked at Abhinav, the man who had loved me. Who was my husband, my present, my future. The man whom I cared for now, the man whom I loved now, a love that was different from the one I had for Javed….. 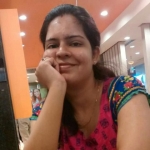 I Became A Woman Soldier In The LTTE For Revenge – The Sinhalese Killed My Family!

Letter Unsent: To My Unborn Child