I recently went on a trip with Nupur Talwar, mother of Aarushi Talwar, who was murdered almost a decade ago. Despite their horrific journey since then, she has retained her warmth and generous nature. An inspiration.

Rajesh and Nupur Talwar, till two weeks back, were just a cause to me. A cause that I believed in and participated in.

How did I get to know the Talwars?

I think we take up causes which disturb us the most, where we imagine ourselves in the shoes of the affected and the very thought shakes us out of our comfort zone. What happened to them triggered in me a deep sense of restlessness, especially after reading all that I had to read about their case, and I was completely convinced that they had nothing to do with the murder of their daughter, Aarushi and their domestic help, Hemraj.

Post that, I found a constant echo of “It could have been you” in my head. And since their troubles were amplified by society’s reckless want for sensationalism at the cost of a personal tragedy, I also felt responsible as a member of society to step in and do what I could in my capacity.

I and few like minded individuals came together and fought a social media campaign to spread awareness of the injustice that happened to the couple. I am not sure how far our efforts paid off, but justice finally prevailed and the couple was released from the jail about an year back. I rejoiced the judgement, got in touch with the couple, wished them heartily for a new beginning and slowly went back to the routine of my life. The memories of the couple and their tragedy gradually faded in my head.

Till something very unexpected happened recently. I planned my next solo trip to Amritsar and decided to drop in on the way at Delhi, and meet the Talwar couple and few other friends. Rajesh was happy to welcome me to his house and also invited me to stay over, which I accepted. The next day, Rajesh surprised me by asking if I would be willing to let Nupur join me for the trip. 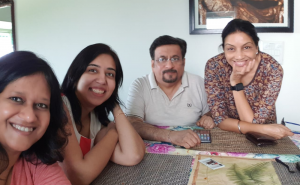 Rajesh and Nupur Talwar with the author at their home

Though I have of late been doing only solo trips and found a rhythm with myself in such travels, I couldn’t resist the intrigue of getting to know Nupur better, as a person, beyond the cause. I agreed to Rajesh’s proposition.

A warm and lovely couple…despite everything

Rajesh and Nupur heartily welcomed me when I reached their home. I thought they looked very nice and different, and then I realized I had never seem them smile before. All the pictures I had seen of them had only horror of their misfortune written on their faces.

Both Rajesh and Nupur were warm and endearing. In spite of all that they had gone through, there was something very wonderfully humane and positive about them. While Rajesh is trying to reestablish his dentist practice, Nupur is finding ways to volunteer in NGOs.

Only the two of them lived in that house, but there was the constant presence of a third person, which was Aarushi. She was there all over their walls and they couldn’t stop talking about her every now and then. They both are very proud of her, proud of all that she already was in that tiny life.

Pride in their daughter – Aarushi

While Nupur remarked how Aarushi, at 13 was already reading books like The Kite Runner and Shantaram, Rajesh had pride in his eyes, when he remembered how Aarushi asked him not to save money for her further education as she was capable of winning a merit seat. Nupur also narrated an incident where Aarushi had planted a seed in her school compound, in the name of her friend, who died in an accident at 8, and watered the plant every day till before the day she was killed. She watered the plant so religiously, even on the days of her exams, and even she was running late for the classes. Her parents came to know about this touching endeavor of their child through her friends, after her death. 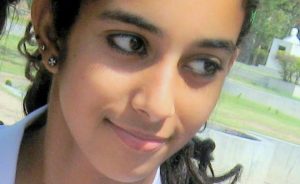 The parents voiced how the last ten years just went past in saving themselves, and only now they are left to face the grief of her void. I couldn’t fight my tears as Nupur was mentioning how it breaks their heart to see all of Aarushi’s friends grown up, reminding them constantly of what Aarushi could have been, the infinite possibilities of a bright and dreamy child that never came to be realized.

I came to know a lot more about Nupur during the trip. She is one of the most genuine, kind and unassuming people that I know. While the tragedy had tempered her and made her stronger, it didn’t kill her warmth and empathy. I was surprised when she told me that she still visits a friend she made in the jail every week without fail. I wonder how its possible for someone to retain the generosity to give after all that was taken from her.

While she was understandably hurt by the betrayal of their many friends after the tragedy, she was also grateful for all the acquaintances who became their friends post tragedy and all the new people who came into their lives, extending their support. Prominent among them is Mr. Rekhi, whom she fondly calls Godji. Mr. Rekhi reached out to the couple after reading Avirook Sen’s book titled Aarushi about two years back, and has since been a pillar of support to them.

I knew that a trip to Amritsar with Nupur would be a new and enriching experience. But I had no idea that it would also be great fun. We did have a lot of tete-a-tete moments during our trip, but we also enjoyed the travel with no fixed itinerary and good room for surprises. 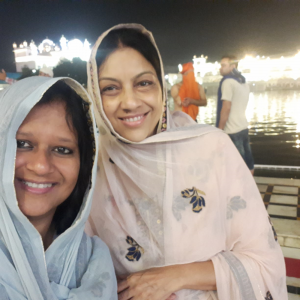 We visited 3 beautiful Gurudwaras besides the Golden Temple, tried out local food specialities, visited the Wagah Border, stayed overnight in a Punjabi village and went for a Tractor ride and early morning walk in the farm. We also shopped for Phulkari suits and got them stitched by the local tailors.

A quiet, private person thrust into a nightmare

Nupur told me how she was a natural introvert and detested any kind of attention. She narrated an incident from her high school, where she deliberately left one or two questions in her physics paper unanswered, as she didn’t want to score the highest and get called out in the class. One can imagine the tragedy of her being in the middle of the most infamous murder case of the country, due to the inefficiency of investigating agencies and irresponsibility of media. 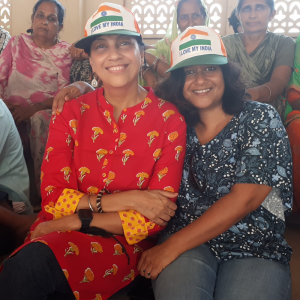 While she was conscious of being recognized in places like airport, where ocassionally we would find a person or two staring at her, she was completely at home at other places where she would warmly chat with the locals and listen to their stories with interest.

Dealing with the loss of their child

Nupur is currently trying to deal with the emptiness of the loss of their only child by writing letters to her dead child, while Rajesh is trying to forget the loss by taking up new hobbies like singing. He has been recording songs, mostly sad songs in a music app. I found it really endearing when he played one of his songs and asked me to guess the singer. I am not much acquainted with music, and took the name of Hemant Kumar, on which a visibly pleased Rajesh revealed to me that he was the singer. Nupur later playfully shared that Rajesh plays this innocent prank on everyone who visits their house for the first time.

The most touching part of their story is the unmistakable and undying love the couple has for each other. Rajesh not just encouraged Nupur to go on this trip, to overcome her inhibitions in being seen at public places, he was calling her every now and then to check on her while encouraging her to try out new things such as horse riding, milking the cow etc., in the village where we stayed. 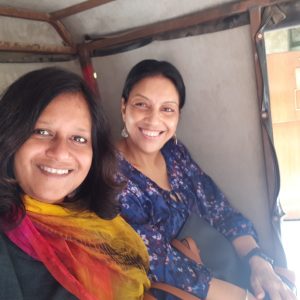 I think it is their love that helped them survive a tragedy of such monstrous proportions, and all the inhumanity they had to confront in the process. And their biggest success is in being able to retain their trust and hope in life and humanity in spite of what they had to endure.

They are definitely my heroes, for they teach me to look at life and suffering differently.

Gnanapriya is a Bangalore based Banker, a passionate feminist with a keen interest in philosophy,

What If Aarushi Talwar Was Your Daughter….Or Mine?

How We Failed Aarushi & Hemraj