“No! Mrs Adlam told us to colour-in outside the lines and make a bigger picture so that’s exactly what I'm doing. It’s pretty, right? It’s pretty.”

“No! Mrs Adlam told us to colour-in outside the lines and make a bigger picture so that’s exactly what I’m doing. It’s pretty, right? It’s pretty.”

Author’s note: This short story is about the customs of Bengali widowhood. For decades, Sujata has prayed that the widow’s white of her bare, borderless sari should enter her soul and give her serenity to accept it all. Her mind has continued to rebel against the social customs that she has tried to force herself to accept. Her granddaughter, Sahana, has other plans.

As always, she is emphatic, convinced that she cannot be wrong. Shahana is six and three quarters. Sujata has learnt the difficult way that these three quarters of a year are very important to her granddaughter, as much a part of herself as her name, HiIamshahanaIamsixandthreequarters.

There is a table nearby, and there are chairs, but Sujata has spent a small lifetime forgoing them in favour of the piri on which she and Shahana now sit-squat together, with Sujata holding her stainless steel plate in her hand. The piri‘s stubby little legs hug the floor; it holds grandmother and granddaughter close, somehow containing them against the combined armies of physics and gravity. There is not a millimetre to be had between them, a single hair would not be able to shimmy through. They are touching.

“Na shona, you are not”, Sujata says.

Shahana and Sujata have been left alone together for lunch. And, as is the custom for whenever they are alone, Shahana has had her’s, and now she waits for her grandmother to finish so that they might take their siestas together. As far back as she can remember, Shahana has been told by her parents (well, Madhumita is punctilious to a fault but Siddhartha always feels the need to insist that he doesn’t “believe in all these superstitions”) that she mustn’t touch Din when she is eating otherwise Din’s meal will be spoilt and Din will remain hungry all day.

In the darkened dining room, with its high ceiling, its old, cracked, red, cement floors, its dark, pistachio green walls, its peeling, flaking cowlicks of paint, its polka-dotted vitiligo of exposed plaster of paris, its rickety shutters closed against hungry tomcats and the brazen burn of the noonday sun, Sujata relaxes the rules which she has steeled herself to live by. The presence of Shahana allows her to step outside herself for a little bit, ponder the world as it might otherwise have been had Adarsha not been taken from her so soon, had she not been plunged into untimely widowhood and unexpected poverty, had not been faced with the challenge of raising two daughters by herself, had not been forced to depend on the occasional breeze of goodwill blown her way by the wishes, whims and occasional fancies of her two brothers and their wives.

Throwing herself into a life whose objectives were survival and existence, Sujata had learnt to play a part. At first that part had been played out of anger, its props had been carried in protest: the stark white borderless sari; the bare forehead (so striking on one who had always matched her teep to her sari); the interminable fasts; the strict and sudden vegetarian diet for one who had always relished her chhoto-macher-jhol and whose maacher-matha-diye-moong-dal had been unanimously celebrated, the near-fanatical avoidance of etho… Over time, she began to accept it all, she would wrap the white about her, taking as much care over this new business as she had once done over her taants and Assamese silks, and as she wrapped, she would beg for the serenity of the white to enter her soul. You are all the colours, she would tell herself, you are all the colours.

“Wouldn’t it be easier to do your colouring on the bed?”

“Well, then, keep the colours inside the lines. Your sketch pens are flying everywhere”.

“No! Mrs Adlam told us to colour-in outside the lines and make a bigger picture so that’s exactly what I’m doing. It’s pretty, right? It’s pretty.”

Sujata wakes with a start. The squawks and concertinas of impatient rickshawallahs and autowallahs and minibus drivers sounding their horns in an impatient orchestra tell Sujata, without ceremony, that she has slept for much longer than she had intended. Eyes groggy with sleep, limbs heavy as if weighted down, Sujata brings the edge of her sari and dabs at her eyes. They water ceaselessly these days… That’s when she sees it.

In the gathering dusk, she is able to see colours blooming where nothing has bloomed for eons. Sujata fumbles for her glasses and with their assistance, she is able to decipher a trail of flowers blossoming on her aanchal. Drawn by an untrained hand, they lead to a little uneven collection of rivers and mountains, little mud huts and squat little palm trees. There is a rocketship, there are stars and three moons.

“Do you like it?” A small voice asks, through the darkness.

Sujata’s mouth trembles. What can she say? 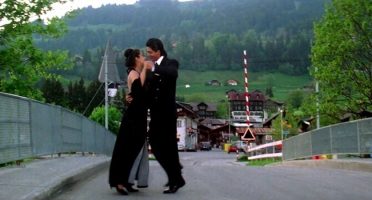