Dear Mrs Naidu: How Writing Letters To A Dead Person Can Make You Come Alive!

Mathangi Subramanian’s book Dear Mrs Naidu is a great and empathetic introduction of kids to the inequities of the world through a gutsy fictional heroine who writes letters to Sarojini Naidu.

“I’m sorry if that was rude, but I haven’t written to a dead deceased passed on historical person before, so I don’t really know the polite way to say that you are dead it.”

When twelve-year-old Sarojini is asked by her teacher in Ambedkar School (a Government school in Chennai) to write a letter to someone she would like to know better, she chooses the poet, feminist and freedom fighter Sarojini Naidu. Young Sarojini fumbles to say things to Mrs.Naidu as she is ‘dead’ and definitely a ‘stranger’. But with each letter, the child discovers that besides her name there are many things she is, in common with the great Mrs. Naidu.

Through this journey of letters drenched in innocence and soaked in the optimism of a child, there is a real-life fairy tale that begins to unfold. Where no matter what and how the beginnings are, there is always a Happy Ending. There are moments when you are smiling, your eyes squeeze with laughter, then there are moments when you find yourself shaking your head at the hopelessness and the way we judge each other. What you won’t be able to deny at the end of Dear Mrs. Naidu by Mathangi Subramaniam is that your brain and heart have grown a little more.

In one of the letters junior Sarojini says-

She refers to episodes from Mrs. Naidu’s life to fight for her rights under the RTE (Right to Education) Act. Every time she loses faith she is reminded of how Mrs. Naidu stood up against the British, found the courage to say what was right, and didn’t give in even when no one believed. These words of Mrs. Naidu echo in her heart, and remind her time and again of her indomitable spirit-

“Do not think of yourselves as small girls. You are the powerful Durgas in disguise…forget about the earth. You shall move the skies.” 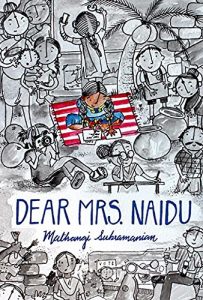 The book is possibly the simplest guide on RTE (what it entails, its lack of proper implementation, and possible solutions). Through the life story of young Sarojini, her friends Deepti, Amir, the army of aunties, the HM, the local councillor, the reporters… one begins to understand why in spite of all the provisions in the RTE Act, the Government schools are in such a deplorable state, and why reservation for EWS (economically weaker students) in elite schools may not be the solution to their struggles.

Today when some of our own children are sharing the classroom with children from the economically weaker section of society, it is important for parents, teachers and the students to read these letters to see the world from the eyes of an underprivileged child. Their world is no different from the world of a so-called privileged child. At the end of the day, they too need friends, a teacher who understands, a mother who cares, they want the presence of their father, they too have dreams and aspirations. And when you choose to ignore or refuse to mingle, they can see it and they too feel hurt.

In one of the letters, the twelve-year-old brings out this with such poignancy-

“I’m a girl and he’s a boy.
I’m a Hindu and he’s a Muslim.
I‘m an only child and he has two brothers.
All those opposites don’t matter, though, because inside we’re the same.
But rich and poor are opposites, Mrs. Naidu.”

The book may just reduce the gap between the rich and the poor in your heart, if not in the society at large.

If you’d like to pick up Dear Mrs Naidu by Mathangi Subramanian, use our affiliate links: at Flipkart, at Amazon India, and at Amazon US.