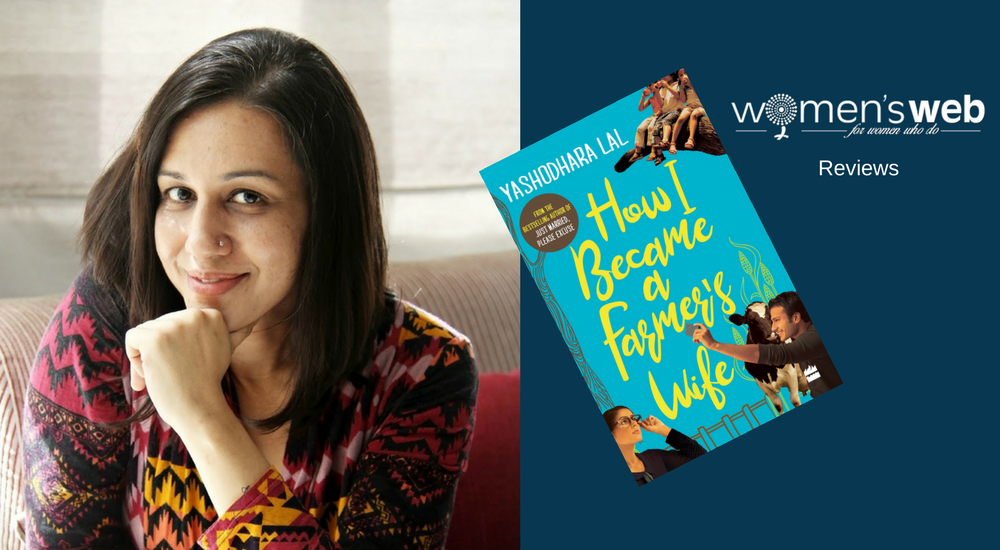 In her memoir How I Became A Farmer’s Wife, Yashodhara Lal tells us of an interesting phenomenon – successful techies turning unlikely farmers.

In an interview, many years ago, Bill Gates remarked: “I know there’s a farmer out there somewhere who never wants a PC and that’s fine with me.”

At the time he said this, Gates probably didn’t take into consideration the rapid development of technology and, more importantly, our dependence on it. Nor did he account for Vijay Sharma’s determination to venture into farming and rely on the now omnipresent network-connected device as a valuable resource to aid his endeavour.

Can you blame him? Who in their right mind would’ve thought, back in 2006, that an educated man would contemplate giving up a successful corporate career to become an urban dairy-farmer? Even today, it all seems a little far-fetched, but Yashodhara Lal’s latest offering narrates the story of just such a hare-brained idea.

Mild-mannered Vijay is the perfect Indian husband – responsible and predictable. Well, at least he was, until he decided to turn Farmer! Vijay’s unsuspecting wife Yashodhara is caught off guard when, tired of the rigours of city life, he actually rents land and starts dairy farming! As if Yash didn’t have enough going on already, what with her high-octane job, three children and multiple careers.

As Vijay dives deeper into his quirky hobby, the family is plucked out of their comfortable life in the steel-and-chrome high-rises of Gurgaon and thrown headfirst into a startlingly unfamiliar world – complete with cows and crops, multiple dogs and eccentric farmhands, a shrewd landlady and the occasional rogue snake. Will these earnest but insulated city-dwellers be able to battle the various difficulties that come with living a farmer’s life?

This book is a sequel of sorts to Yashodhara Lal’s debut novel – Just Married, Please Excuse, though it doesn’t explicitly say so and both books can be read independent of each other. It picks up from an incident mentioned in the first book where Vijay decides he wants to buy a plot of land. It is sufficed to say their experience doesn’t quite work out as planned. Nonetheless, twelve years, three children, and a change of city haven’t deterred Vijay one bit. Thus begins Yashodhara’s journey into becoming a farmer’s wife.

Like her debut earlier, How I became a Farmer’s Wife is a fictionalised memoir and she narrates it with the same breezy humour that comes naturally to this exasperated mom who’d love nothing better than to Zumba some sense into her husband’s head.

Yash has three hyper-active kids on her hand and reading about their antics is proof that the Lal-Sharma household would be no less than a zoo. She swears by her rules of discipline and is adept at dodging their mom vs. dad games, while secretly resorting to her own brand of underhand games every once in a while, to win them over.

Meanwhile, Vijay, having decided to pursue his passion for farming, is floating in Mooli and Gobhi heaven. The idea that he can eat as many parathas made from farm-fresh vegetables and wash them down with fresh cow’s milk is his self-certified guarantee of A+ health. But the engineer in him only has a seed of an idea and no farming expertise whatsoever to implement it. And that’s when the real trouble begins.

I imagine the author must have maintained a diary log to record their experiences. There is so much happening in everyone’s lives, and all interconnected, that it would be impossible to keep track. In addition, there are all these new, eccentric characters on the farm, both two-legged and four, who pose quite a challenge to keep up with.

However, the farmer has to be an optimist or he wouldn’t be a farmer, and perhaps that adage is what keeps Vijay going even after he faces one hurdle after another. Yash can only watch – sometimes amused but mostly shocked – as Vijay is practically running on fumes, what with his passion slowly eating away his sanity along with that of his wife.

Lal has a fabulous knack of storytelling when it comes to her own life. The tongue-in-cheek humour, stolen moments, everyday disasters – they all play out in glorious colour in your head and you begin to wonder where exactly does fact cross over into fiction. Then again, you would have to read it to find out, though it may be wise not to believe every word you read.

If you’d like to pick up How I Became A Farmer’s Wife by Yashodhara Lal, use our affiliate links: at Flipkart, at Amazon India, and at Amazon US.

Top image via Yashodhara Lal and book cover via Amazon