Can Men Truly Be Feminist? Let’s Examine This Closely!

Can men truly be feminist? Individual men can of course, honestly support the rights of women; nonetheless, men as a group benefit from the privileges that patriarchy gives them, says this author.

“I am not going to change my name after marriage” – I announced. To which my dad replied, “You have to, it’s our culture. A girl needs to take her husband’s name after marriage”. I was surprised. It was my dad. I was not expecting such an unbecoming reply from him. In spite of being liberal and open-minded in most respects, how could he be so traditional about such matters?

Well, this is a perfect illustration of a culture of male privilege where a man’s feelings are positioned above a woman’s in a way that is perceived as customary and traditional. Taking one’s husband’s name is considered normal for a woman, whereas deciding to keep one’s own name diverges from that. Prevalent culture over and over again makes this behavior as undermining to a man, but never bothers about how a woman might feel when being pushed to change an identity that has been with her since her birth. Is this the society we live in and is this the feminism we talk about?

It’s about attaining equal rights on all levels. Every individual, irrespective of gender should be treated equally. Any individual who is ready to work towards eradicating patriarchal domination can be called a feminist. It is a crusade for equivalence communally, ethically, and economically. There are numerous clusters of sidelined individuals in society, but the primary movement is for and by women. Feminism is a fight against male dominant society. Subsequently, feminism depends a lot on how communities recognize the part of radicalism in working for integrity and impartiality.

Can men then be feminists?

I believe that men can be friends, helpers or supporters of women, but that does not make them feminists. The patriarchy does not provide distinctive exclusions or immunities for men with noble intentions. Their support for the women’s crusade does not wipe away the point that though not on a structural stage, they are still capable of distressing, attacking or assaulting women. They carry on benefiting from a society that creates and supports male dominance.

Even today, women are being sexually assaulted, hassled for dowry, and lie open to spousal cruelty, marital rape and unlawful flesh trade. There are other prevalent problems as well, such as rape culture and the legitimacy of triple talaq for Muslim marriages. No matter how many feminist protests they join or how many radical writings or work they recite, men will continue to remain as oppressors, as a group. Providing sheer support to the principle of feminism or just having faith in the philosophy of feminism doesn’t make an individual a feminist.

It is about convenient feminism

Ideas of liberation and feminism have infiltrated further certainly, but they still linger at the assertion phase. Undoubtedly, people appreciate movies like Pink, Dangal and Queen which support feminism but at the same time we ban movies which talk about sexuality. This male dominant society accepts advertising campaigns, talk shows on feminism at its own discretion, within the boundaries of conventional manners or activities. Such male feminists just use their public image as a way to justify offensive conduct. They will support your right to have sex, but not your right not to have sex. They state publicly that they will sustain anti-violence exertion, but are ferocious in their own dealings. They believe in feminist movements to make a career out of it and may use a woman as a foothold to get success. In other words, for them feminism is not only a fake concept but its also about their own convenience.

Men can be pro-feminist but they retain their privilege

Although I believe that in today’s society men can be pro-feminist and anti-sexist, I do not believe they can be feminists in the real sense. In this patriarchal system, men cannot take out themselves from the traditional supremacy and privileges bestowed upon them. Men in India cannot give up their privilege and power in support of women. They are absolutely reliant on women for their sexual needs and other factors to develop and flaunt their masculinity and so on.

Feminism is about hating men?

Unsurprisingly – No. It’s not about disliking men but the male privilege and the arrangements that fashion such norms. Not all men are dreadful, but all men derive advantage from male privilege. Any crusade for female liberation or empowerment, if led by men, will ultimately support patriarchy.

Getting the mark of a feminist isn’t enough. In today’s world, it’s important for men to combine feminist tasks and customs with day to day routine work. Irrespective of what you decide on calling yourself, what actually stands out is how you perform. It’s your job to eliminate those dangerous patriarchal ideas from society and to energetically pay heed to women’s apprehensions. Being rational towards creative methods to challenge your own privilege and providing support to society is the need of the hour. 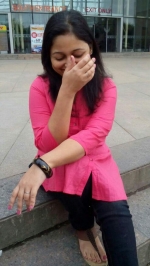 Prachi is a fashion designer by profession. Apart from designing she loves writing and in