Veere Di Wedding {Trailer} – Why Should Boys Have All The Fun?

With the Veere Di Wedding trailer out, it appears as if finally, Bollywood has decided to fill in a glaring gap and make a fun movie on a girl gang. 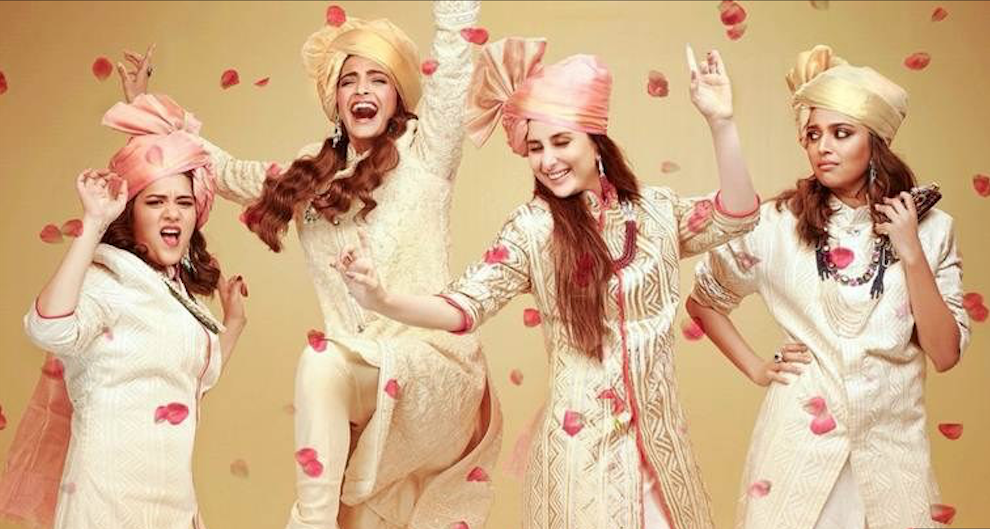 With the Veere Di Wedding trailer out, it appears as if finally, Bollywood has decided to fill in a glaring gap and make a fun movie on a girl gang. Catch the trailer of this upcoming movie here!

The Veere Di Wedding trailer which shows a gang of four girlfriends will have you ROFL. You will identify with them, probably hear echo of your own conversations on a girls’ night out and laugh at the unabashed language.

As per the trailer, all the four women in their mid-thirties, do not want to follow the set rules of society and instead, choose to live life on their own terms. They have girls’ nights out, drink, smoke and discuss their sex lives – all of which are considered taboo in our country. When one of them finally agrees to get married, she has no clue what she has signed up for. The ensuing madness forms the crux of the story.

It’s heartening to see Kareena Kapoor in a madcap role, something she had played to perfection in Jab We Met. She is ably supported by Sonam Kapoor, Swara Bhaskar and Shikha Talsania. Surprisingly, this movie has been produced by Balaji Telefilms, a production house which is infamous for making its serials as regressive as possible.

The trailer showcases how women in our country are branded as per their marital status. There are unwanted categories like ‘unwed mothers’, ‘divorcee’ or ‘sad spinster’ that women have to avoid being slotted in at all costs. It does not matter if you have a successful career, a degree, or even fame – unless you have the all important ‘mangalsutra’ around your neck. The need to have a girl gang and sticking along with them through thick and thin is also the main theme that runs through the trailer. Veere Di Wedding: Not flawless But Has Its Heart In The Right Place!

Can We Say That Sisterhoods On Screen Have Finally Come Of Age?

There have been many movies on boy gangs or on young boys who stumble through life till they find their way. It’s about time that we got a movie which is about girls but does not deal with crime against women plaguing our society – as if girls cannot come together for any other reason.

Veere Di Wedding seems to be about friendship, the importance of girlfriends, finding yourself, fighting against the patriarchal mindset, but most of all, about putting up your feet and laughing a little through the circus called life. After all, why should boys have all the fun??

Catch the trailer and definitely, the movie as well – it seems really promising!

These upcoming Hindi movies in 2019 (and a few that are already on the screen) promise to show us women as they are in the 'real world' - in a range of avatars. Check out our list, and make your plans!

These upcoming Hindi movies in 2019 (and a few that are already on the screen) promise to show us women as they are in the ‘real world’ – in a range of avatars. Check out our list, and make your plans!

“Nahin, mujhe chod ke mat jao, mai tumhare aage hath jodti hun”, (Don’t leave me!) this must’ve been said by at least a gazillion women in Hindi Movies on screen all through the 90s and sometimes even in the early 2000s. We’ve come a long way from there.

From the last few years, all our women onscreen have been rising to the occasion and celebrating life independently and how! From a woman who went on her honeymoon alone (Queen) to a daughter who wouldn’t budge for a man, prioritizing her father before anyone else (Piku) to a naïve simple housewife plunging ahead to take English classes to remind her family that she can achieve anything she wants to (English Vinglish). Last year too, we saw some terrific characters on screen, in Raazi, Andhadhun, Padmaavat, Hichki, Pari and more. We finally have iconic female characters now redeeming the terrible parts that they were confined to in the past.

I have not watched the movie Sanju but one scene from the trailer was interesting. It was the scene with one man and two women. The man confesses to having slept with 308 women and is debating on whether to add to the number while the two women look at him as if he were an endearing little boy who is blurting out the truth in a hurry. It doesn’t help that one of the women is his wife.

I wondered how this scene would be received if the genders were reverse – one woman and two men and the woman confesses to the same crime with one of the men being the husband. Forget 308, let’s just begin with her confessing to a number under 10. I couldn’t even visualise the scene and I realised that this would probably not be an A grade movie and least of all, a Rajkumar Hirani movie. The Indian audience have liberated themselves enough to go from ‘Ek Hi Bhool’ all the way to ‘308 Bhools’ – at least where the man is concerned. (Bhool = mistake).