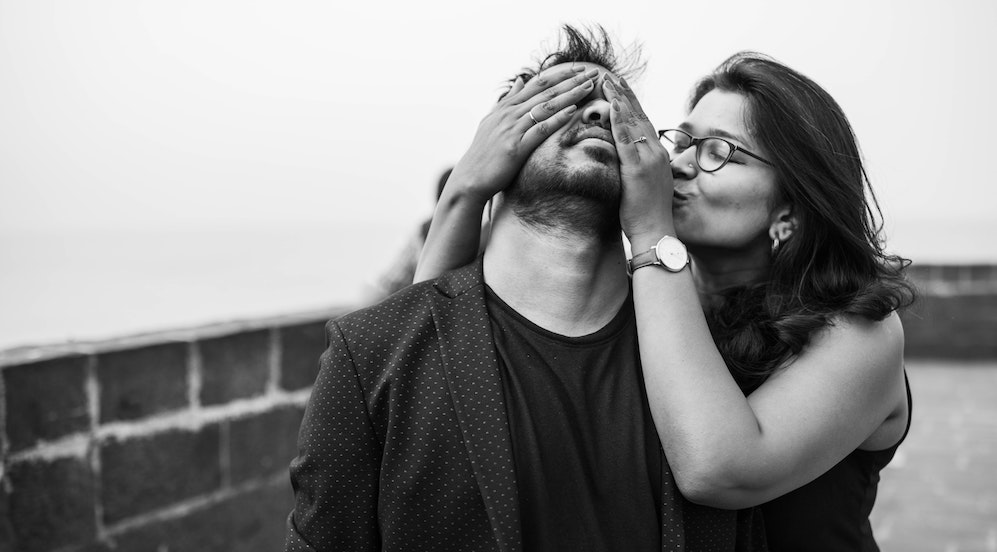 A First Date Story With A Little Laughter & A Whole Lot Of Madness!

First dates are always full of nervousness, but also, they can be electric! Read this account of a unique first date, where a woman makes a move.

It was the 31st day in the month of December, I could not decide whether to tie my hair or keep it open. I was all set with a pencil skirt, a short shirt and a denim jacket along with fancy earrings, my favourite wristlet and other accessories to head out for a date. Lipstick check, deodorant check, Kajal check – these things I needed to put in my purse for a little touch-up.

It was almost 5 pm and he might show up anytime in front of my PG. It was for the first time in the last 7 years that I was on a date with a stranger. As such, he was not a complete stranger to me. I had met this man while returning from my hometown Durgapur, he was sitting next to me on the bus. We were both working and single. We exchanged phone numbers and bid goodbye to each other. Sometimes I would think about that little conversation we had on the bus. I had a little routine here. I was staying with my roommate in a PG at Salt Lake. I always wanted someone special in my life but somewhere while balancing my studies and career, I had been left single.

It took 3 months for me to make the first move and I got to know that he was moving to another city. I congratulated him. We decided to meet on New Year’s Eve as we might never get a chance to meet again. I don’t know why it was so important for me to meet with him. He was supposed to meet me in front of my PG. I couldn’t take my eyes away from him, his slim built physique in black jeans, light blue shirt, and a khaki jacket. We walked down to a nearby park. It was almost dark outside and the park was quite empty. We sat on a bench and started our conversation again.

After a while, we noticed two men approaching us. They asked us awkward questions like what we were doing there even after dark, who was he etc. They introduced themselves as the anti-Romeo squad. I sensed danger. As soon they asked me about my father I lied to them and said that he was a DSP (Deputy Superintendent of Police) posted in Dumdum, though in real life my father worked in DSP (Durgapur steel plant). They then let us go. We almost ran away towards the nearest crowded place. I breathed a sigh of relief and he praised me for my presence of mind. It was only 6 pm so we decided to go to Salt Lake City Centre where we could talk for a while and then return to my PG by 7 pm.

We discussed our family, life, career, future plans. In the course of the conversation, he asked me what qualities I looked for in my partner. I could have replied with something like,  ‘it depends’, ‘it’s personal’, or simply ignore it but I decided to come up with the truth: ‘I really didn’t know’. My mother always taught me to keep a distance from boys but no one ever taught me how to choose the correct one. I also told him that my parents would probably choose someone suitable for me. After pausing for a few minutes he asked me the million dollar question about marrying him. I clearly told him that he was nice and I liked him; but I needed my parents’ consent first because at the age of 29 I could not run away with him like a teenage girl. It would be a shameless act. My colleagues, relatives, friends would laugh at me. After a certain age, you can’t let your hormones control your decisions.

He didn’t even know my past, he might have rejected me after knowing that. He then wanted to know what was bothering me. I paused for a moment to wait until another day for the story as today I wasn’t prepared for that. He agreed and informed me that he also needed to take his parents’ consent.

It was almost 8.30pm; after dinner, we split the bill, as we generally did with our friends. As it was the New Year’s we decided to go to a disco and then return to my PG. I imagined dancing like Angelina Jolie and Brad Pitt danced to the song “I was patrolling the Pachinko/Nude noodle model parlor in the Nefarious zone” from the movie Mr. And Mrs. Smith but reality turned out to be something else. The disco was overcrowded and I had never heard the song which was playing. Young boys and girls were dressed according to disco trends like ripped jeans, crop tops, minis, micro-minis whereas we were in our office formals. Couples were dancing like pros whereas we were doing freehand exercises on the dance floor. We were so mismatched with those surroundings. It was like a generation gap. The music was too loud, and I guess I was too old.

We sat down near the drinks counter and I had a cocktail. It was so refreshing. It was like taking an oath in the courtroom. I started speaking the bitter truth of my life. I said I had been rejected at least 20 times in marriage proposals and that was the reason I was still single. My classmates used to call me ‘ma kali’ for my dark complexion and long hair. I didn’t wake up looking like I did then. I had put on lots of makeup so that he wouldn’t run away.

I was not happy that he was moving to another city. He followed suit and came out with his story. Today, he hadn’t even recognized me at first. He was approaching the woman standing next to me. Then when I called him, he had turned to me. He said he took bath on alternate days during winter. Yesterday, he purchased a new shirt for today’s meeting as he didn’t have any washed shirts available.

Although I love to listen to bhajans and Rabindra Sangeet, I equally enjoy music from Linkin Park, Bryan Adams, Akon and Jamie Foxx. I informed him that I had lied at the beginning and my actual age was 30. He replied that he was 29 years old indeed. He asked me about my ex-boyfriends (if any). I took out my phone, and opened my profile on some social networking site to show him a photo of mine while I was in college. He apologized for the question. I told him that every male I ever met in my life had either friend zoned or sister zoned me. He smiled and said, “Not me”. I felt weightless like a feather.

It was a newly discovered friendship and partnership with the joy of togetherness. Then we decided to return as it was almost 12.30. Clearly, I didn’t want to return at all. Couldn’t we hang out for the whole night or for eternity? As soon as we were out, he got down and started vomiting. It was obviously what would happen if someone danced like that after dinner. This was the first time we held hands. Strangely, a middle-aged woman approached us and asked me what happened to him. Clearly, she could see that we were drunk. To her surprise, without giving a second thought I said that he was 3 months pregnant with my child. The woman angrily looked at my face and left without a single word. Afterwards, he asked me, “What was that? Are you mad?” I nodded my head. He replied with a smile, “Me too”.

While returning in an auto rickshaw I started thinking about my body odour and bad breath. I should have avoided those onions during dinner. We promised to do crazy things on our next date as well. We even started with a list; the clueless auto driver was sometimes looking at us in the mirror and definitely thought us that there was something wrong with us. After we got down from the auto I was looking for a safe place. Instead of a hug or a good night kiss, I got a high five on my first date night. The whole time I was thinking about getting intimate and that too on my first date, but nothing happened at all. I was sure he never thought of anything like that. Finally, I returned to my room.

As A Lone Desi Girl In Australia, I Learnt To Accept People Without Judgements!