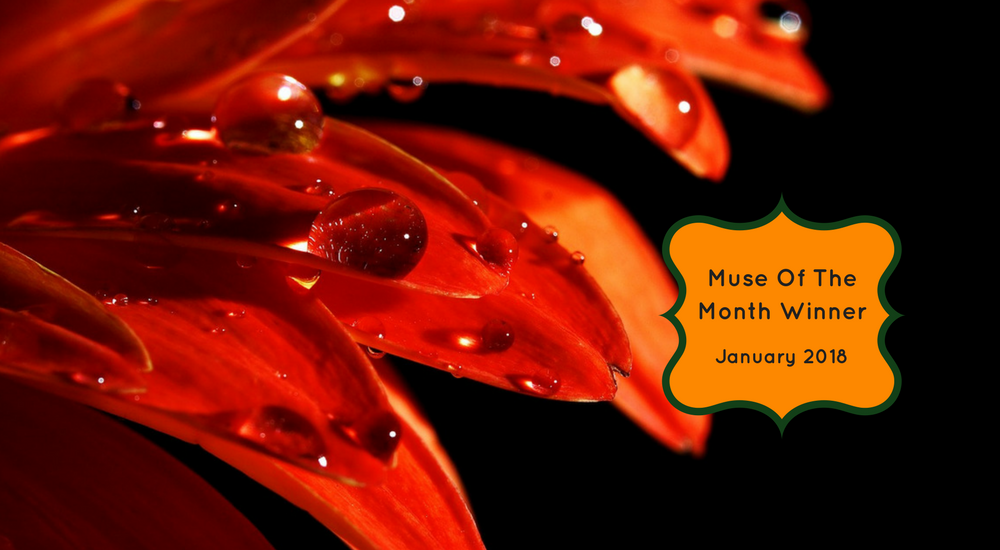 The fourth winner of our January 2018 Muse of the Month contest is Manishi.

A gentle breeze was blowing in from the open window. But despite that, rivulets of sweat from her palm were running down the length of her arm to form a damp spot on the table where her elbow rested. The other hand was holding the telephone cord, her thumb counting the coils over and over again. She had shut her eyes automatically as the caller at the other end started speaking. Sumana was a visual thinker, she needed to “see”what was being said.

Sumana was a natural at what she did. Though she wasn’t quite the social type, her office in her previous life usually had friends/colleagues dropping by often. She had been like that in high school and college too. she always had a ready shoulder for them to cry on.

A few years into a successful career, Sumana was seized by a restlessness. She had graduated summ cum laude, was independent though her family doted on her, earned well and took pride in her work. But, it had lost its meaning for her. While she was in a tiny corner of the big wide world, working twice as hard as the men around her, strategically plotting to get that promotion, she was also painfully aware of the millions out there to whose life her work make no difference at all. In her view, she and maybe her immediate family, were the only beneficiaries of all the talent she thought she had been blessed with. It felt like a waste. But even her close friend, Kavya did not “get” how she felt. “You are making mountains out of molehills” Kavya had said. “It is all coming too easily to you, that is why you are thinking these unnecessary thoughts”

But was for Sumana these “unnecessary” thoughts didn’t go away. They depressed her, life had lost all it colour. She had veered between wanting to be “normal” : her career, safe income and routine days and that deep seated desire to just express herself, make a change, make a real difference in the world out there, however “abnormal” it come across to others.

For three months she visited a psychologist regularly. Slowly Sumana, with the psychologist’s help, worked though her existential depression. Just the way heavy dark clouds rain down for a few hours, then dissipate leaving a crisp new freshness all around, Sumana reclaimed her renewed spirit. Inspired by the positive change that her own psychologist had effected in her, holding her ability to be a shoulder to cry on for so many of her colleagues as evidence that she can be an effective counselor, Sumana set about confidently changing her career.

Now, despite a year into becoming a crisis counselor, she could still not shake off the feeling that every caller’s life was in her hands and if she said the wrong word, maybe there’d be no second chance for the caller. She was used to sitting side by side with a person in distress and supporting them in getting through the crisis. It was far more complex over the phone. So much rested on every word spoken – and unspoken – on either side.

Sumana’s calm smiling voice: Sakhi help-line, Sumana speaking. How can I support you?

A tentative voice on the end just said: Can I talk?

Sumana: Of course. I am a counselor, am here to listen…. What can I call you?

The voice was silent, Sumana could just hear rapid breathing on the other side, trying to decide whether to answer. The hair on her neck stood up – she was still getting used to listening to the silences. She knew it took immense courage to just call.

The strained voice on the other end: I am normal. Just this little thing otherwise I am normal.

Sumana: Ok. Would you like to talk to me about that little thing?

The strained voice, after many false starts, as though speaking to herself: Maybe it is not little. Maybe it is huge. Maybe I am not normal either….(long pause) I come from a small town in the Deep South. I have been in this city for the past decade, studying and earning….. (silence)

Sumana, unsure where this conversation was leading, but needing to establish some trust: a-ha, and then? Go on am listening.

The voice, encouraged: Even when all my cousins and sisters got married, I was stubborn that I will study and ran away to the city.I am currently doing my PhD and now my family is so proud of me.

Sumana was taken aback and reflected that back: Wow! That is such a achievement. You are a brave woman. Not many….

The voice, now defensive, hurriedly interrupted: No! Before you say anything else, know that I am not good enough. I am letting my family down once again. I don’t want to do the PhD anymore. I cannot become a doctor. I love the world of ideas, I enjoy thinking reading analysing. But am afraid I can’t do it anymore. Am such a waste. While I spend the brains I have been blessed with in adding accolades to my name, the world is coming to an end, children are dying… (quiet, muffled sniffing and sobs)

The words rang close to home for Sumana. She desperately wanted to hold the caller’s hand and tell her that it will all be ok. Despite the distance between them, Sumana could feel the weight of the young woman’s emotions – how she was feeling crushed by the persistent enormity of those feelings. Before Sumana could speak up…

The voice, now reigning free, continued as though a dam had been broken, whispering into the phone, barely audible: I just want to be normal. Normal people have a career, money, family. Normal people are happy with that. Why can’t I be? Just finish my PhD, become a doctor and make my family proud, earn well and (sarcastically she added) settle down. Why should I have all these other thoughts?

Sumana’s voice automatically took on a comforting tone: Why? I have a few questions of my own for you. Why would you want to be normal? You are such a special person. What is “normal” anyway? What is normal for you may not be normal for me. Isn’t it so?

There was a thoughtful pause on the other end.

Sumana, afraid that the caller may have put down the phone: Hello? Hello?

The voice: Panimalar, you had asked my name.

Sumana smiled. Behind her closed eyes, she visualised a beautiful blood red flower(malar) with a drop of dew(pani) on it. She knew they were past the crucial crisis point. The conversation continued for nearly an hour. Putting down the receiver, Sumana opened her eyes. Pure white clouds, moving sedately across the bright blue sky distracted her momentarily. When she absently felt the damp spot on her desk, she suddenly felt such a rush of gratitude, that it overwhelmed her. As a single drop of dew fell on her palm, wide as an open flower, she knew she would never forget this conversation – Normal is so overrated, just look at her, just look at Panimalar.

Manishi wins a Rs 250 Amazon voucher, as well as a chance to be picked one among the top winners at the end of 2018. Congratulations!