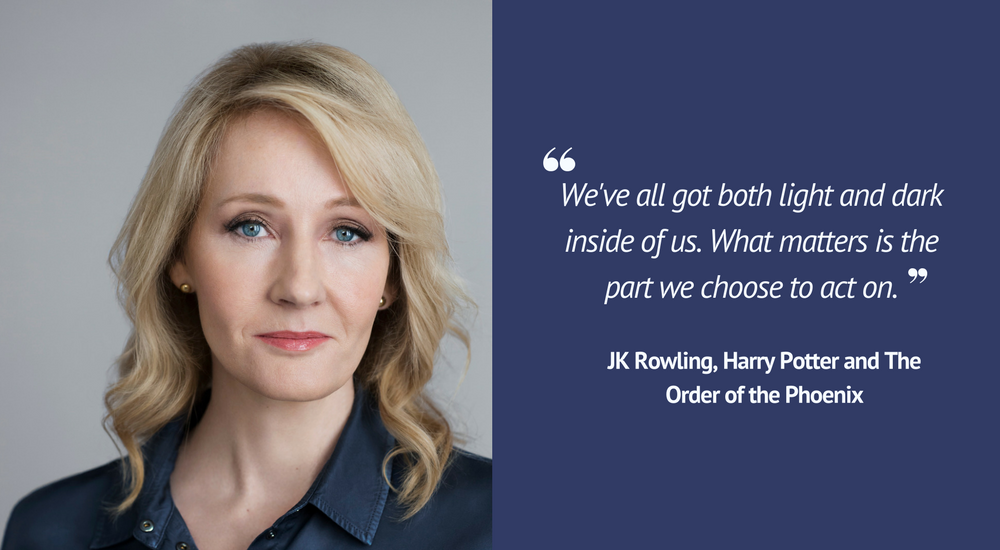 Lumos! The world of Harry Potter, JK Rowling’s brilliance doesn’t need light! A lot has been written about the books, about Rowling’s own journey, speculated theories, fan conversations, merchandise, films! Every conversation you can imagine about the Harry Potter books has been had. Every minute detail broken down into several small parts.

But what did the Potter books mean to me? Or what did JK Rowling mean to me, when as a 12 year old, I first picked up my Potter book? Then, and then always? As a child who grew up on a staple diet of Enid Blyton, of characters like George, and in a parallel universe, Nancy Drew, women characters and writers weren’t new. They were protagonists and they were imaginative, relatable and fun. What then was Hermione?

What happened to me, was that as Harry, Hermione, Ron and the rest of them grew up in Rowling’s mind, I grew up in a reality laced with patriarchy, while my own home was and is a feminist setup. So Hermione’s reactions, her unashamed desire to excel at things, an unquenchable thirst for knowledge, all seemed perfectly legitimate, and adoptable as life style choices.

But the world outside the haven of home, is very different. It frowns on ambitions that women hold, that creates their own identities. And that is when I kept returning to Hermione, the best in their year, who believes in bravery, adventure and excellence – usually the domains of men in the real world. She believes in charting the unknown to help a friend, she stands by a friend because she chooses to, she celebrates her choices every step along the way. Just as we must as women in everyday lives. Just as Rowling has encouraged us through each page.

So when I read Harry Potter And The Cursed Child, I felt a monstrous sense of betrayal. Where Hermione was reduced to not even a shadow of her former self, a pitiable character stripped off the power to choose, by a man who clearly failed to understand why Hermione became Hermione – an effortless feminist character, that didn’t ever spell it out for others to understand, but always exemplified it through every action.

As a writer, I feel that sometimes women write women best. We are empathetic to struggles, we understand what feminism means – in its simplest, rawest form. And we also then create characters that breathe – that are certainly more human across genders. That are as vulnerable as we are everyday. They make mistakes. They own up to them. They are afraid. Harry isn’t a reluctant hero always. Draco isn’t the power loving, malicious boy always. Dumbledore doesn’t have all the answers.

And Snape. Snape isn’t evil. He is angry, jealous, yet he is brave and loyal. It is this reality, this empathy, that has always drawn me to Rowling again and again. I was grateful when she announced that Dumbledore was gay. The inclusivity that the series champions is critical in today’s toxic atmosphere of palpable hate. Dumbledore was easily one of the most loved characters until the Half Blood Prince. I remember a dear friend knocking on my hostel door past midnight when she finished reading the book – positively aghast and in tears, since he had just died. And with the conversation on his sexuality, and the simple truth of how we are all humans, entitled to the same love irrespective of orientations, adds new reasons to respect and love the books, all over again. JK Rowling has been instrumental in building

JK Rowling has been instrumental in building contemporary culture- with humour and imagination, giving a generation of new age children, a reason to believe in happy ever afters. But what she did deftly, was alter what those ever afters meant, and could be. She created and celebrated individuality, eccentricities, and the imperfections of the everyday people she set in her magical world.

The Potter books beckon me like old friends, when they suck me into familiarity allowing me to explore new undercurrents as I read them each time. I often wonder what it is that lures me. For many it is magic. For many it is a story of the veritable underdog, for many it is an inspiration from The Lord of the Rings, for many it is a tale of friendship. But for me, it is a story of three friends, who grow up together, two of whom would’ve floundered without the third. The young girl, with bushy hair. Who refused to conform. To ideas of beauty, to what women should be and can be. And who harbored the ambition to excel. And excel, she did. Always.

It will always be the story of unrequited love, and of forevers that we shape, because we alone, have the right to choose them.

Feminism In Harry Potter? Not Obvious Despite Awesome Hermione Granger

20 Years On, JK Rowling And The ‘Magic Beyond Words’ [VIDEO]