“Indira was an extraordinary woman,” says Sagarika Ghose at the launch of her new book on Indira Gandhi, a book that is sure to make waves.

Sagarika Ghose is certainly not an unfamiliar name. Given the fact that she has been a prime time anchor on the news network CNN – IBN and is now the consulting editor at The Times of India, she is a woman whom surely any avid news watcher / reader (like myself!) is familiar with.

As an author of two novels, she recently launched her book, ‘Indira: India’s Most Powerful Prime Minister’. Sagarika, radiant and bursting with energy was more than happy to engage in conversation regarding the book and the woman adorning its cover.

“Insecure daughter, betrayed wife, national heroine, tough dictator”. The phrases on the book cover reel the reader into its pages, stroking a keenness to know more about the woman who created norms in the political realm of India.

When asked about her motives in writing a book which relied heavily on facts and immense research, Sagarika says, “2017 is the year Indira Gandhi would’ve been 100 – her centenary year. Which is why Juggernaut approached me and it just went from there. But I personally believe that it is important to recall her. The things she did, the life she led and her way of reaching out to the people live on even today.”

“She created the high command culture which is the scenario with Indian politics till date. She looms large in the sense that she single-handedly wrote the playbook for politics. When one hears the word ‘dominant’ one looks no further than her. After all her legacy continues a 100 years later.” 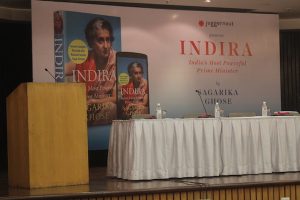 But of course, as Sagarika explains in her book, there is more to her than meets the eye. A woman like Indira Gandhi paved the way for women as leaders at a time (and till date) when women are struggling for basic rights or for their space in society.

There are contrasting sides to Indira’s personality in the book. The woman we all to as being powerful and a tough leader but she was at the same time an individual with her own heavy baggage – of insecurities and vulnerabilities.

“She was all of these”, Sagarika mentioned. “She had multi dimensions to the nth degree and was a bundle of contradictions. She exuded personal charm and grace however her suspicions and the fact that she bore grudges, all of this combined, made her one complicated person. She did not forgive and forget easily. She felt the need to take revenge from life perhaps, in context to those she felt had betrayed her family – especially her father.”  When she was a child (as mentioned in the book) an aunt called Indira ugly and stupid, and that remark stung, and stuck with her. So much so that years later she made sure that this aunt was not invited to an important event! 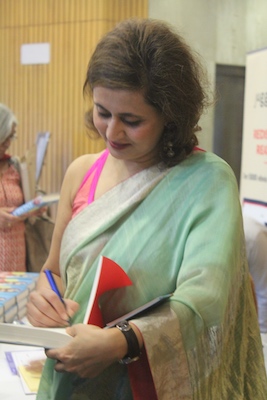 Sagarika delved into the woman who grew up in times where a girl child wasn’t reason for celebration. “Being an only child was rare those days. It was common to have three or four siblings. The pressure of the eldest son’s first child to be born a male was immense in those days.”

Could this be why she would sign letters as ‘Indu-boy’? Sagrika says, “Yes, certainly. She grew up with her masculine side being foremost, be it how she dressed or signed off her name, the man in her personality was the primary force. Furthermore, she was fiercely protective of her parents and this was evident in her relationship with them.”

It was fascinating to hear Sagarika say that she did not agree with India’s style of politics and did not think she was a democrat, but during the course of the book she started liking her more and more as an individual and not just a leader.

“Indira was an extraordinary woman. Not just politics but her way of life and her vested interests. She liked skiing, loved books and was proficient in various languages especially French – she was like James Bond in a khadi sari!”

Indira Gandhi once stated ‘I am not a feminist’. Perhaps she too felt what women today feel compelled to achieve on a daily basis – to succeed in a ‘man’s world’ traits of masculinity must be visible. 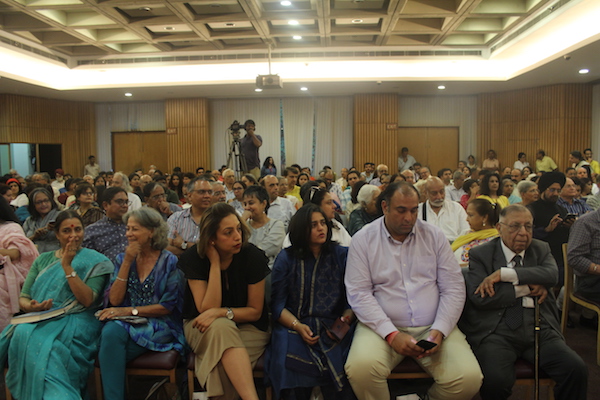 Parenting influence on Indira shaped the woman and leader she is known as today. Sagarika writes about how Indira’s father had no patience for weakness of any sort and her mother who battled illness most of her life but had an inner strength that Indira imbibed. “The journey that Indira had during her childhood paved the way for the mother that she would become years later. The choices she would ponder upon and the decisions she eventually took as a mother and leader in her later years were undoubtedly as a result of the parenting she received, the matrimonial alliance she chose and her conviction that it would indeed be her family that was destined to rule India forever”, says Sagarika.

‘Indira: India’s Most Powerful Prime Minister’ captivates the reader from the introductory line itself. It details the life of a power player in politics, but as you continue turning the page, one discovers the woman behind it all. A leader who was more than her political agenda and aspirations.

A line in the book states ‘imperfections make her heroic’.

They certainly do. For all women.

A Treat For Readers Across Ages, INDIRA by Devapriya Roy & Priya Kurian Is Unlike The Usual Biography