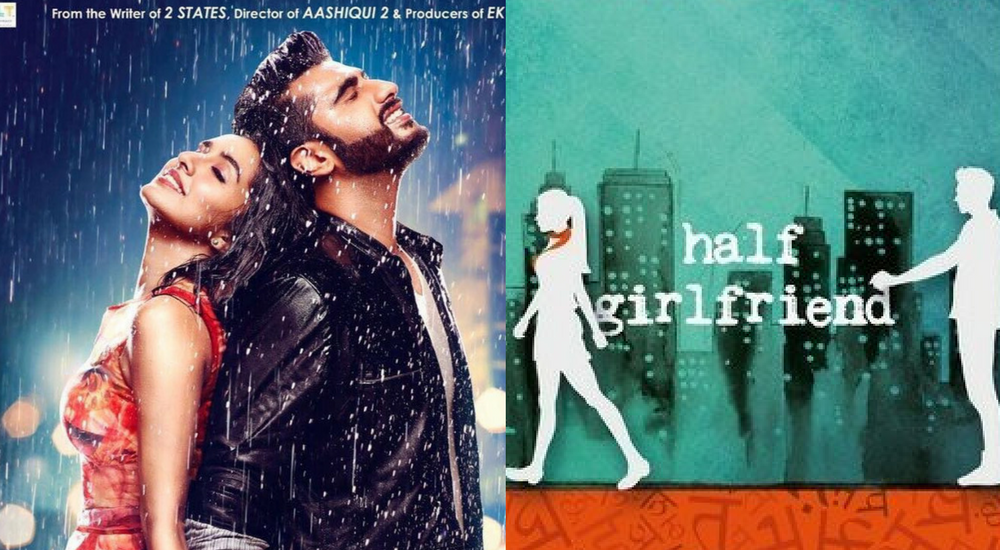 If you read Half Girlfriend and found the immature, shallow protagonist a drag, watch the movie to find out…that this is no better!

About two years ago, I was waiting at the airport for a three-hour flight. As I picked up a Reader’s Digest, I stumbled upon a book by Chetan Bhagat titled Half Girlfriend. The prologue suggested that the protagonist’s love interest was dead.

The first chapter mentioned that St. Stephens was pronounced as ‘Steven’s’ by the ‘English types’, something that had always bewildered me. The guy was from Bihar (my home state). I was intrigued.  The store owner gave me that ‘Are you even going to buy it, this is not a library’  kind of a look. I purchased it, feeling guilty.

Once I finished what started as an interesting read, I wondered if Chetan Bhagat had inadvertently published a rejected movie script.

What happens when an already dramatized book is further dramatized into a movie?

The disclaimer of the movie, Half Girlfriend reads that it is a ‘dramatized adaptation’ of the book.

Madhav Jha (Arjun Kapoor) is a Bihari boy who gets into St. Stephens college on a sports quota. Without wasting any time, on the very day of the interview, he falls in love with Riya Somani (Shraddha Kapoor), a basketball player, and a singer with an accent, who climbs to the top of India Gate every time she needs a breath of fresh air.

Riya becomes Madhav’s friend, but Madhav is not sure whether she reciprocates his feelings. She agrees to being his ‘half girlfriend’. No, it is not a desi ‘Friends with Benefits’. He is a sulking lover who gets no ‘benefits’.

I feel that dating in India becomes much more complicated with our confused, transitional, hypocritical society and arranged marriage back-up options. Some relationships remained unnamed and undefined. Where do we categorise them?

This could have been a fascinating premise. But the thought is lost in an unapologetic, unrealistic plot, shot with numerous songs in the rain.

Everything that did not work

There are clichés of a rich, yet unhappy girl with a wife-beating father. There is a Bihari boy with an inconsistent and annoying accent. When we watch Hollywood movies/TV shows, we sometimes see a ‘brown’ guy who is supposed to be Indian, whose accent makes us defensive. This is not how we Indians talk! The same applies to Arjun Kapoor who harps in Bollywood-villager-English. Swara Bhaskar had managed to authenticate a much more believable Bihari accent in Tanu Weds Manu.

In one of the most talked about scenes of the book, Madhav calls Riya to his room. As the testosterone driven lover boy tries to make a move, Riya asks him to control himself. He does not listen, gets frustrated and pushes her. She stops talking to him. Just when we started to think she is a sensible person, this first-year student meets Madhav to hand him over her wedding invitation. And where does this scene take place? At the roof of India Gate – the most easily accessible hang out place in Delhi!

Riya disappears. Our lover boy who has never heard of ‘no means no’ sings some sad song. Riya reappears in Patna. She is now divorced after a brief, abusive marriage. She has left her parents as they did not support her decision. The college dropout with no apparent financial support from parents seems to have a good job and lifestyle. She takes English tuitions for Madhav who is trying to attain a grant from Bill Gates for a rural school. Madhav’s English never improves, despite three years in St. Stephens, and Riya’s tutorials. When he says, “I wanting, I needing” she does not even bother to correct him. She is probably too bored to listen, just like the audience.

Seema Biswas, that one credible character

Madhav’s mother (Seema Biswas) instantly disapproves of Riya because of her ‘divorcee’ status. She effectively represents the hypocrisy of an Indian woman of her generation. She walks out because a minister refuses to offer her a grant to educate girls. yet, this crusader for girls’ rights asks Riya if she would have divorced her husband even if she had kids, taunting her for being in the habit of ‘leaving’.

She is a perfect example of a woman who seems to be progressive to the world but only her ‘bahu’ kind of person would know what she really is. Yes, empowerment of women in Indian society could be restricted to attaining an education. Leaving abusive marriages and getting divorced could be perceived as ‘running away from problems’.

Riya disappears again. This time because she has cancer with just ‘three months left’. Now if you are searching for somebody with terminal illnesses, where would you look for them? What kind of a person would be singing at a bar in New York City in such a fragile state of health? Probably the kind of person who climbs to the roof of India Gate to solve all their problems!

Madhav finally finds her, after a lot of drama and irritating songs. The college dropout managed to afford to live in one of the most expensive cities in the world. And guess what? She did not have cancer after all. She lied to Madhav, because his mother did not want her beloved son to marry a ‘divorcee’. So, she let him believe that she was dying so that he could get over her. What about her parents, family, friends? Don’t bother!

A half woman – of the man, by the man, for the man

Riya is only seen through Madhav’s point of view. She is attractive enough for him to fantasize, mysterious enough to keep him interested, ghosts him only to save him, while being hopelessly in love with him all this while. Initially, I had thought that she is not attracted to him which is why she never commits to him. But why would a Bollywood actress make choices for herself when she could make sacrifices for the hero?

Chetan Bhagat in his own words had said the following: “Half-Girlfriend, to me, is a unique Indian phenomenon, where boys and girls are not clear about their relationship status with each other. A boy may think he is more than friends with the girl, but the girl is still not his girlfriend. Hence, I thought we needed a term like ‘Half-Girlfriend’. Because in India, that is what most men get.”

Let me assume that when Bhagat said, “That is what most men get!” he is referring to the physical aspects in a relationship or rather the lack of it. Is it something a ‘man should get’, or a ‘woman should give’?  There are repetitive instances of this male entitlement in the book such as the infamous dialogue, ‘Deti hai to de, warna kat le’.  Or Madhav’s immature friend’s idea to invite Riya to his room to “test” if she loves him. A scene that ended with him trying to force himself, and pushing her.

Oops, they did it again

The problem is there is no part where these boys are seen repenting for such behavior or where the woman is objecting to it strongly. Madhav ends up getting the girl, despite his behaviour. Bollywood loves to trivialise the violence and assault of women, as seen in the recent movie Badrinath Ki Dulhaniya where Badri ends up winning the heart of the woman whom he once locked up in his car trunk.

A woman is also a human being with a brain, decision making ability and sexual desires. She could have sex for herself too, not as a gift she ‘gives’ to deserving men. A thought that later struck Chetan Bhagat, as he wrote a book about a liberated woman who has sexual relationships with a married man giving us a skewed interpretation of his feminism.

So which is worse – the book or the movie?  Tough Call!  All I know is that after a double dose of stupidity, my sensibilities have reduced to half.

Veere Di Wedding: Not flawless But Has Its Heart In The Right Place!

No, Let Me Finish, Baba. You’ve Spoken A Lot; It’s My Turn To Speak Now