In India or abroad, whenever a woman stood up and challenged gender stereotypes, she has been warned and told to shut up, but nevertheless #ShePersisted. 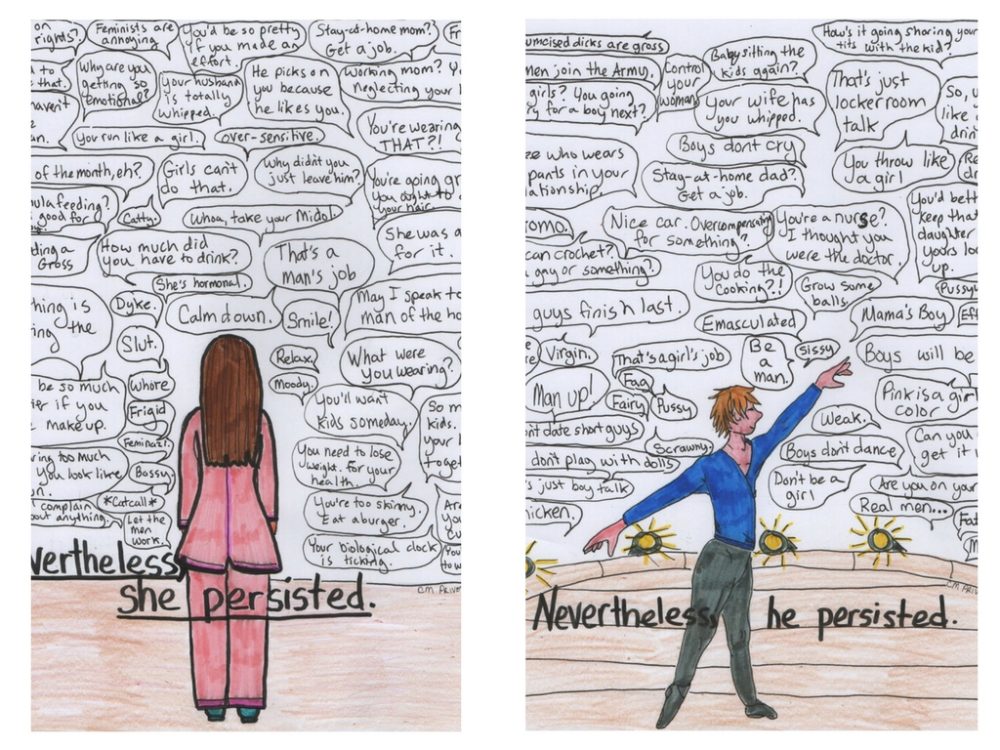 In India or abroad, whenever a woman has stood up and challenged gender stereotypes, she has been warned and told to shut up, but nevertheless #ShePersisted.

Gender stereotypes are so deep rooted in our society and within us that it is difficult to trace back its origins. It is something that we have been born into and lived with all our lives.

But not anymore. There are women who have decided to call it enough and are challenging the existing status quo. And one of them is US Senator Elizabeth Warren. Ms. Warren was silenced by her fellow Senator with a very sexist comment, “She was warned. She was given an explanation. Nevertheless, she persisted.”

This was patriarchy in three sentences and this comment was a war cry for millions of women around the world. #ShePersisted almost immediately began trending on Twitter.

Courtney Privett, a fiction writer currently living in California was outraged by what she saw and heard. She says, “I don’t want my daughters to hear the same things I have. I’ve heard derogatory commentary about my gender as long as I can remember.” She decided to express her emotions through her art. This is the signed version of my drawing. Facepalm for forgetting it to begin with, but wasn’t expecting anything like this to happen. pic.twitter.com/EMpS3E7550

The illustration is a compelling reminder of what society has been telling women since time immemorial. Whenever women have tried to voice their concerns for the betterment of their sorority, they have been called names and have been forced to shut up. Privett beautifully articulates her thoughts and the many things a woman hears throughout her life with her drawings.

On a similar note, in another post, she also discusses the kind of gender discrimination boys face. Yes, patriarchy is bad for women, but it is bad for men too.

The society has ample time and a great thesaurus for men who are anything but muscular and ‘manly’. Hearing words like ‘Homo’, ‘Virgin’, and ‘Sissy’ is not so uncommon for the boys who deviate slightly from the perceived ‘role’ of men in the society. Dedicating the artwork to her son, who, as she stated, loves to dance and has also faced the wrath of patriarchy.

I was asked to do a male version. This is for my son, who loves to dance and should never be shamed for that. #ShePersisted pic.twitter.com/qcYbWTYUVd

The illustration shows a boy in the middle with open arms, dancing away, with ‘Nevertheless, #HePersisted’ written across. Here too, she has used the phrases like “Boys don’t dance” and “Are you on your period” to show the kind of insensitivity men face in a patriarchal set-up.

Long time ago, an English poet, John Dryden emphasised the role of satire as a kind of medication that helps in curing the society’s entrenched beliefs. Courtney Privett’s drawings are indeed, a great example of using satire to tackle and face such issues head on.

“I was always a hairy girl. In school, I was called names and compared to boys because girls are generally not that hairy. Most nights, I would cry myself to sleep. Neighbours and relatives would ask my parents to take me to a doctor and get checked because girls are never so hairy. Or because it’s abnormal. I don’t want anyone else to go through this,” says Shruthi, when asked if she encountered gender stereotypes in her childhood.

With Elon Musk and Grimes announcing their plan to raise their child X Ӕ A-12 in a gender-neutral way, debates are bound to spring up. There are people both for and against this style of parenting.

Why do we still observe the gender division of labour, the boundary that defines male and female work?

As kids in India, we are brought up to certain stereotypes. Household chores like cleaning out attics, cleaning cars, fixing machinery around the house are all labeled ‘men’s work’. Anything to do with the kitchen, clothes, household items, come under the purview of the females. Growing up in a household, where the men in the house comprised of one person over 65 years of age and one under 10 years, I’ve been exposed to women doing all of the above jobs, irrespective of whether it was men’s work or women’s work.

Breaking the stereotype, my mother and I have climbed into attics and climbed down water tanks, fixed every sort of machinery around the house, from washing machines, to refrigerators to water pumps. There was always a manual to help, and what didn’t come with a manual, could mostly be solved with a bit of common sense. END_OF_DOCUMENT_TOKEN_TO_BE_REPLACED