I did have a traditional wedding with all that this entails, but as long as my husband and I believe in an equal partnership in marriage, should it really matter? 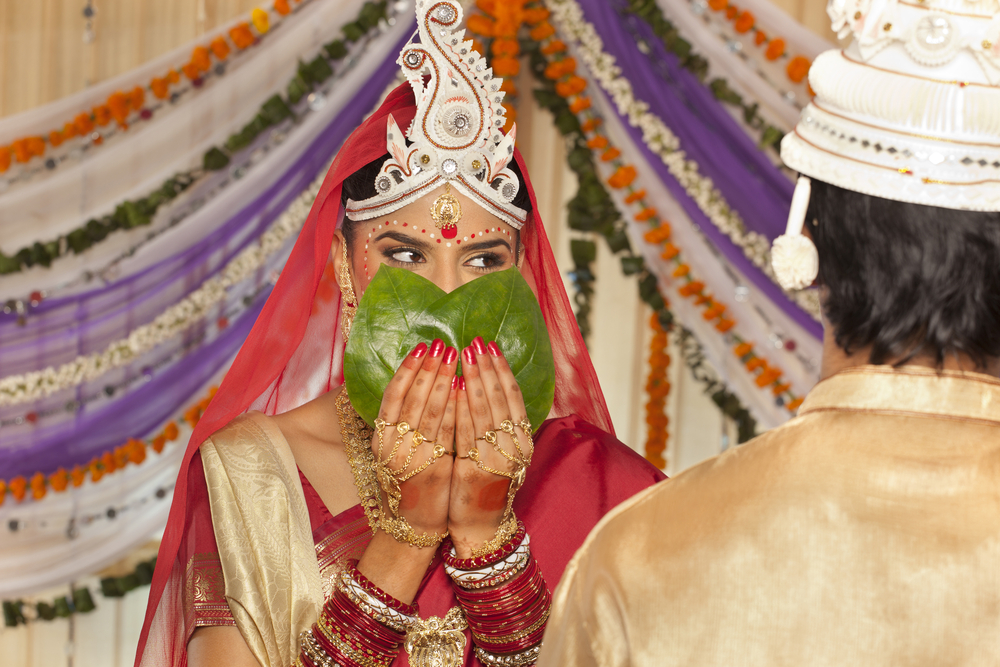 I did have a traditional wedding with all that this entails, but as long as my husband and I believe in an equal partnership in marriage, should it really matter?

My husband and I have been a couple since college. I was barely 18 and we knew we would be married some day. It was probably the presumptuous and pompous thinking that adolescents commonly suffer from, but fortunately for us we did manage to make it work out. We worked through a 6 year long distance relationship. In the 5th year of doing long distance, when we had already been together for a total of 7 years, we decided to get married.

We thought this formality would mean very little to us. In our eyes we had been effectively married 6 years earlier when we made a commitment to give this relationship our very best shot. But for social and legal reasons we decided to go through the formality. We were then in the US and our parents set up the whole thing. They went the whole nine yards, with the mehendi, the haldi, my husband arriving on a white mare accompanied by a band and dancing family members lighting fire crackers and then a wedding ceremony celebrated with 400 people followed by another reception with another few hundred people.

Our parents did a grand job of arranging the various ceremonies and rituals. Some were a lot of fun. My husband loved riding the white mare on the streets of Bombay with all the fanfare. We had a ritual where I was made to sit on a wooden platform and my brother and 3 of his friends had to hold the 4 corners of the platform (with me still on it!), lift it and take me in circles around my soon to be husband. My brother was a head shorter than the rest of his friends, so the platform was tilted. It was scary and fun at the same time. Finally they had to bring me eye to eye with my 6 foot 4 inch tall groom who was being mischievous and standing on his tippy toes. Somehow they managed and we exchanged garlands.

Then the ceremony itself had a lot of fun rituals. To us they were interesting activities and we did not delve into their meaning too deeply. They still had an emotional impact because the traditional wedding actively involves family members in the procedure. The bride’s parents, brother, the couple, the groom’s parents and siblings all have some role to play. Then there are the out right fun customs like the bride’s sisters and friends stealing the groom’s shoes.

While we thoroughly enjoyed the wedding, we were dimly aware of the gender biased nature of many of the rituals assigning gender specific roles to the bride and groom. But we ignored them knowing that we would always consider each other equal partners. Yet the gender biased nature of wedding vows that require the bride to obey her husband’s every command and be responsible for household duties and the husband to provide for his family, were hard to ignore.

It is not that I believe that there is anything wrong with these traditional roles, but it should be the choice of the individuals involved. In fact as it turns out my husband does provide for us and I do take care of the house hold duties, since the time our first daughter was born. But before that when my husband was setting up his business, I held a steady job (as a research scientist) whose income we could rely on so my husband could take the necessary risks.

As it turned out he calculated well and it all worked out for us, but having my support made his choices a little easier. So we have always been partners in every aspect of our lives – an equal partnership in marriage.

When we had a child I wanted to focus on motherhood and my husband was happy to facilitate that. Today he provides the financial security while I can experiment with writing along with running most of the household . He also works from home and pitches in extra whenever I need him to, in addition to regularly taking care of a few household matters.

But each of these were choices we made considering our circumstances and what worked best for us, without ever giving a thought to those wedding vows.

Practices like kanyadaan and some others may make some women uncomfortable.

I remember I vowed to wash my husband’s cows. Thank goodness he does not have any. But he does sometimes tease that he might someday buy some shares of Aarey. Yikes!

But if you want a traditional wedding, then these are a part of the package. And even if you don’t take the vows seriously, it feels weird beginning a marriage with lip service to vows you consider obsolete or irrelevant or never intend to abide by.

Yet there are many reasons to want a traditional wedding. I had a wonderful and memorable wedding and as I described earlier. Every once in a while we enjoy watching the wedding videos together. It is fun watching them with our kids too. They are fascinated by seeing papa on a horse and mama being lugged around on a wooden platform and nana- nani and dada-dadi and mamaji being a part of it all. If I had to do it again, it would still be the traditional wedding because a court marriage does not have the same emotional impact and does not involve the family in the same way and does not make for the same awesome memories.

Also only some of it is obsolete or gender biased. There are parts where the bride and groom vow to be each others best friends and support system which is quite meaningful.

The wedding paradox, as it stands to day for many of us who believe in gender equality, is to have a beautiful wedding day involving some rituals and vows that assign narrow gender specific roles to the husband and wife, which is something we fight against, on every other day. The alternative is to have a court marriage that has very little involvement of the family and little emotional impact.

It is not too hard to do away with this paradox. All that is needed is some compromise on the details of the traditional wedding. Couldn’t we have a say in our wedding vows and tweak the ones assign gender specific roles so they make more sense in today’s world or eliminate the ones that are no longer relevant? Couldn’t some of the other customs too be tweaked so the bride and groom are more comfortable with them? They could also be made less gender biased by requiring similar rituals for both the bride and groom. That way the vows and rituals of the wedding day can be more meaningful to the rest of the marriage.

Disclaimer: I only write from the knowledge that I have of our wedding. Weddings throughout India for different religions and regions can be quite different.