On Rakhee Gulzar's birthday, let's take a look at how feminist many of her movies were, especially given the times she worked in.

On Rakhee Gulzar’s birthday, let’s take a look at how feminist many of her movies were, especially given the times she worked in.

Rakhee Gulzar, the famous and critically appreciated actress was born on 15th August, 1947. She appeared in around 90 films and won the hearts with her gorgeous looks and breathtaking acting.

She certainly had a great eye for feministic roles, or at least, movies that were centered on the lives of women. Rakhee Gulzar has successfully brought the struggles and prejudices of women in that era, on the silver screen. Here’s a list of some of her movies that were women-centric.

Rakhee mesmerizes the audience with her acting, in a double act as twin sisters. Kanchan is a shy, introvert and submissive girl who lets things happen to her while Kamini is fun, fearless, outgoing and takes charge. The contrast in their personalities is an essential part of the plot.

Against the sob stories portraying helpless ideal Indian women, it is refreshing to see that the movie doesn’t shy away from showing the darker side of the characters. During a time when movies became hits because of the heroes, Rakhee makes way for herself and shines with her performance. Rakhee plays the lover of Amitabh Bachchan in this multi- starrer film. It is a love story spanning two generations. The ‘college love-birds’ are separated as their parents get them married to other people. They meet after 20 years when their lives have become complicated. It is a ‘feel good romance’ but it also touches how society looks at premarital relationships.

Crucial issues like pregnancy out of wedlock and adoption are also woven into the plot. The song ‘Kabhi Kabhi’ from the movie was a huge hit and is popular even today. 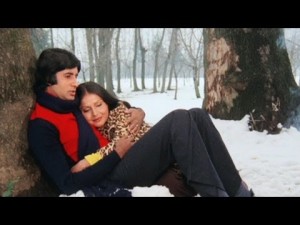 Rakhee playing Nisha, is the protagonist in the film. She is an accomplished advertising agent which was an important portrayal in those times, when most roles women were given were of housewives. Her husband dies and she drowns herself in her work to run away from reality.

Nisha comes across a younger married man, Karan, played by Rishi Kapoor. He resembles her late husband and she falls in love with him. She later realizes that her first love was overshadowing her judgment of life and Karan was in fact another man, different from her late husband. It is a movie about a young girl, Indu, played by Rakhee Gulzar who is about to tie the knot with the love of her life, when her father dies. She has to choose between taking care of her younger siblings or her marriage. The movie reflects the flaw of the patriarchal society, where a woman has to make choices between her loved ones and cannot take care of both simultaneously.

She sacrifices her happiness and begins a life of penance for her brother and sister. After fulfilling her responsibilities towards her family, she sets out to reunite with Dr. Saagar Verma played by Actor Parikshit Sahni. 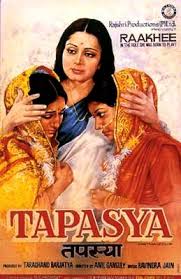 The beginning of this potboiler shows Aarti (Rakhee) suffering because she is unable to conceive a child. Her struggle with herself and the society leads her to frustration and she decides to take a break at her farmhouse. The story takes a grueling turn when Vinod (Shashi Kapoor) tries to rape her and she kills him with a revolver. The body is disposed but the man comes back to her life with a lost memory. Arti and her friend Vidya, prevent him from returning to his normal state. The characterization of the female role is very strong. Rakhee plays Shanti who is the wife of Kishan. Kishan and Shanti are having trouble conceiving a child. Kishan’s brother Shambhu and Shanti share a close ‘bhabhi-devar’ (bro-in-law and sis-in-law) relationship. Their friendly relationship does not go well with the narrow-minded villagers and they speculate a romantic relationship. Soon false rumours are spread regarding Shanti’s character. Her character is doubted simply because she is close to her brother in law. This film showcased how easily society raises questions on a woman’s character and blames her for everything that goes wrong in the family. Rakhee plays a short but pivotal role in the film Rudali. ‘Shanichari’ is played by Dimple Kapadia who has only experienced agony in her life. She is surrounded by illness, death, and misfortune from the day she is born. She has become so accustomed to it, that her tears have dried up and she can’t weep. Then, ‘Bhikni’ played by Rakhee Gulzar enters her life and brings feelings of care and love in her dry days.

The movie calls for attention on the practice of calling professional mourners from lower castes at the death of higher class males to put up a show of crying. It also weaves into its plot darker themes, like restrictions the society imposes on widows and practice of prostitution. Rakhee worked her way up as an acclaimed actor with her hard work and talent. Let’s draw inspiration from her life as an actor and wish her many more glorious years on this special day.