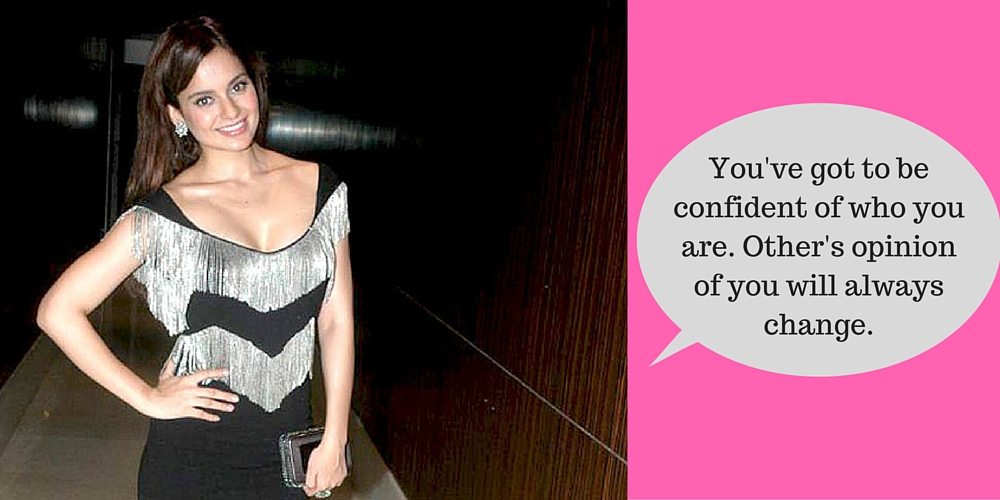 Kangana Ranaut is a spunky actress. The ‘Queen’ of Bollywood usually grabs the headlines for her excellent acting skills or bold, uninhibited statements. When recently asked to comment on the state of ‘freedom of expression’ in the country, Kangana said:

“Freedom of expression cannot be such that it is hurtful to others’ sentiments, as we are a country of so many languages, religions and colours. Forget speaking about the country on a public platform, even at home or at your workplace, you should think before you speak. One must understand the power of words. If it can be perceived in many ways, then please value those ‘many ways’ and come up with the most precise and accurate way to express yourself, so that if you have to go back and evaluate the content of your comment, you should not be in a place where you think that this does not belong to me.”

Whether you agree or disagree, you have to admit that this is not the first time Kangana has been vocal about her opinions. In the past some of her comments has equally shocked and surprised her fans as well as her Bollywood colleagues.

Some of these Kangana Ranaut quotes put together for your reading pleasure!

I have no competition

In a media interview with a leading magazine, Kangana once said that there is no competition for her in the movie industry. She clearly stated that no other actress could have played the role of ‘Datto’ in ‘Tanu Weds Manu Returns’ as convincingly as she did or taken up a project like ‘Queen’, which made her a National Award winner. Her comments were not taken kindly to by her peers. Divya Dutta responded to it by saying that Kangana should know there is a lot of talent around.

What does the term ‘close friends’ mean?

Kangana raised hackles when during the rapid fire round of an interview, she was asked to describe industry term ‘good friend’ and what it meant to her.  She replied instantly, “just good friends means a f**k buddy who’s been slightly promoted.”

Deserves to be the highest paid Female Actor

Another one of her comments which made her female peers angry was when Kangana was told that she is the highest paid actress of Bollywood. Her response was, “I think the kind of films and roles I do takes a whole year… I think it is justified. At some point, we have to come to that place where we are equally paid. It is a small step… we are headed to that direction.”

Why she avoids social media

The firebrand actress once said that she is inactive on social media because of nasty trolls and mean comments from different people.  She was quoted in an IANS report as saying that, “I am inactive so I don’t miss it (social media) but what I definitely see… Certainly one of the good things about such mediums is that you can actually clarify your stand when you are sort of facing rumours and misunderstood. The bad things is that you are susceptible to all kinds of nasty trolls and frustrated people who are just out to show their frustration regardless of whosoever it is and you get subjected to that sort of hatred which is inhuman.”

Not a ‘Sati Savitri’

In an interview the actress who speaks fearlessly, said that people expect her to be ‘Sati-Savitri’, but being today’s woman she is a ‘total badass,’ and refuses to become a sob story. According to an ANI report, she said that “we, as Indians, have a knack for loving a stereotypical, sobbing, sympathy-seeking personality. So I feel the need to promote quirky, cool and youthful talent and stop propagating the sob-story angle of celebs, where they try to be larger-than-life.”

Kangana opened up to Pune Mirror about how she doesn’t feel the need to share selfies on a regular basis to be in the news.

Known for her acting abilities, Kangana spoke on her personal thoughts on love and said, “Every time a relationship doesn’t start on a note that there is clarity of things. Maybe time pass for my age or stage is a lighter term. But I would like to date and I am open to time pass romances.”

As a celebrity, Kangana has always shown a lot of responsibility on the products she chooses to endorse.  She has openly said, “I am ashamed of celebrities who endorse fairness creams.”

The award winning actress spoke about her own temperamental behaviour and said “I am not a very easy person to be with, I am very stubborn. I have hang ups. I am not one of those people expected to do the expected. But at the same time I have always taken the responsibility of my actions.”

In an industry where people try to look perfect, Kangana openly admits her flaws. She says, “Image means a lot. It is everything in the business that we are in. The kind of roles which you get, people identify with your roles, and it then leads to the kind of brands you get. Overall the business is completely based on the kind of image that you have.”

Kangana Ranaut is one of the most bold female actors we’ve ever come across in Bollywood. Her personality, talent and charm has won people’s hearts all over the world. I wish her success for her future endeavours and I’m sure that her bold statements will keep rolling in to inspire and take people by storm.