This rant by Tanmay Bhat, stand-up comedian at AIB, takes on the misconceptions about feminism, which make people shy away from calling themselves feminists. 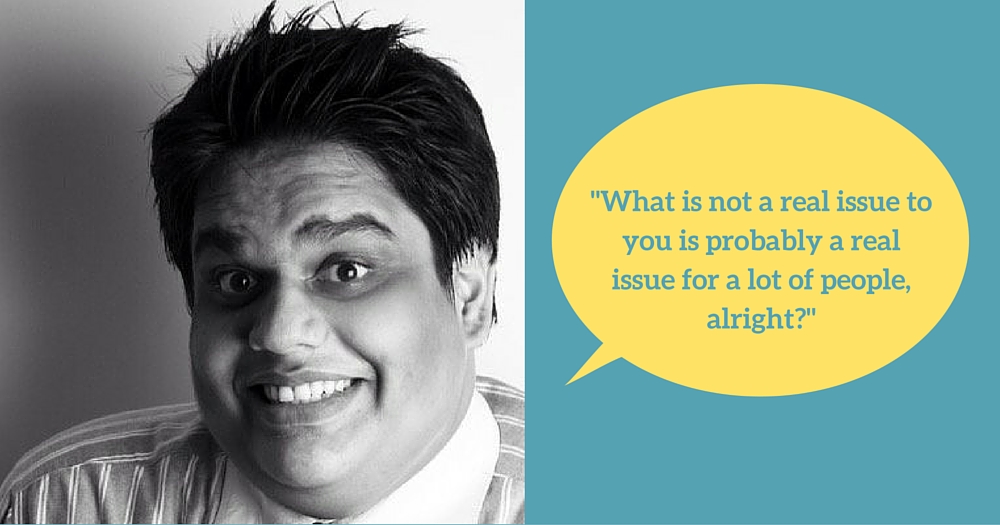 This rant by Tanmay Bhat, stand-up comedian at AIB, takes on the misconceptions about feminism, which make people shy away from calling themselves feminists.

There are these arguments I’ve heard against feminism ever since I can remember.

“It is too strong a word and encourages misandry. These feminists burn bras and want to kill all men.”

“Oh but why are you so bothered about a TV commercial where a woman’s body is used to sell a bike or a deodorant? Look at female infanticide or burning women for dowry, these are the real issues. How can you be so agitated about such petty stuff like item numbers?”

“I believe in equal rights for both genders but I don’t like to associate myself with the term ‘feminist’.” “Oh come on! You women have so much of freedom these days, what more do you want?”

“These are Western Concepts not applicable in our society.” “Women and Men were physically different because they were meant for different roles in the society. You can’t just disrespect that!”

“What about the men who are abused, huh?”

And the list goes on and on. Sometimes, I’ve tried to explain logically and sometimes I just kept silent seeing the futility of an argument with the person concerned. But each and every time people make such cringe worthy statements, it makes me sigh in despair. How long do we have to go before people start appreciating that the term feminism denotes EQUAL RIGHTS FOR BOTH THE GENDERS? It is NOT a NEGATIVE term!

Feminism implies that both men and women should be treated equally by society.

Hence, the feminist in me was delighted when a man decided to answer all those questions that had long been annoying people like me. Comedian Tanmay Bhat took to Snap Chat to counter all the logic people put forward against feminism.

It’s a must watch video if you believe in gender equality or if you’re seeking clarification on the definition of feminism. I was all the more impressed because at a time when many Bollywood celebrities shy away from the term as if being associated with it is going to cause a dent in their popularity, Tanmay takes it upon himself to risk the brunt of people’s hatred but still makes his point.

In a logical manner, Tanmay states why we use the term ‘feminism’ instead of ‘equalism’. In his quintessential funny style, he explains how when the African Americans fought for their rights to vote, there might have been people standing in the side lines and saying things like “Why can’t you talk about the real issues, like slavery.” The point is, an issue might be ‘real’ to someone else and not to you but that does not give you the right to silence the other person.

However, I felt the best part of the video was when he talked about how for centuries feminists have struggled for us to be in the position we are in now, where women can work, voice their opinions, and enjoy the privileges which were erstwhile restricted to men.

He has made a subsequent video answering some of the further questions posed against feminism. You can find it here.

It is indeed very encouraging when people who have a large audience reach start talking about issues like Feminism which for reasons unknown has earned a bad reputation in the minds of many. Kudos to Tanmay for such a bold initiative. We wish more media celebrities follow his footsteps in the times to come.