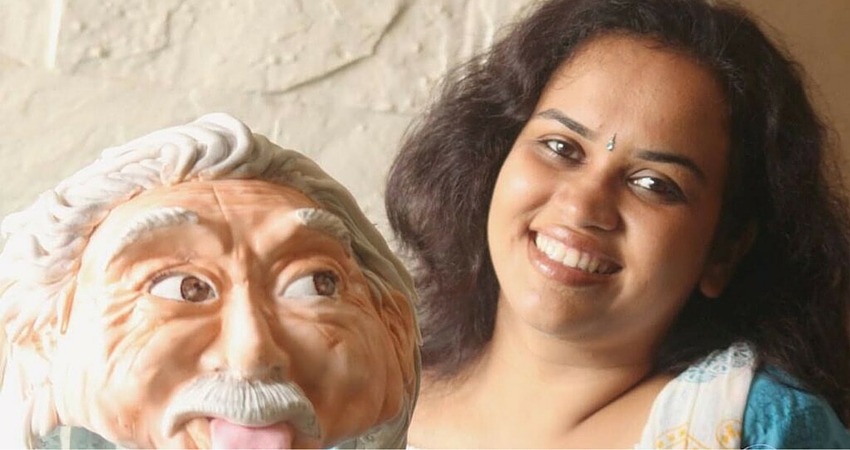 From Being A Dentist To A Successful Home Baker: The Cakeful Journey Of Gauri Kekre

The inspirational story of Gauri Kekri, who was a dentist but followed her heart and became a home baker. Now she is a thriving baker in Mumbai.

It was not an easy journey she says, from being a dentist to a baker, but a journey worth making. Gauri Kekre was born and brought up in Vasai, Mumbai. It was a much protected upbringing around the doctor’s community as both of Gauri’s parents were doctors. On asked, if she had any interest in art, in her childhood, she confessed like a child, that apart from a few prizes for singing here and there, she never had any interest in any form of art.

She was a good student and was good in biology, so like so many in India, she too chose to go for Medical Entrances, which she cracked, but chose dentistry instead of medicine. At 17, she had a major setback when her father expired.

She continued her education. During her college years, she fell in love with her, now husband Srikant Kekre. After college she started practicing dentistry, and after a year and half she married Srikant.

That is when she adds that her first brush with cooking happened. Before that she could cook only Maggie. Her mother and mother in law taught her a few recipes and later Mr. Google took over. Thus her cooking skills came into being.

I could not resist but ask, “Then when did baking happen?” She laughed and said that after two years when her daughter was born, she started spending more time at home. She could not fathom the thought of leaving her daughter with someone else. Once her daughter started to go to play school, Gauri resumed her dentistry. That is also when she started baking, but by her own confession, they were just normal cakes, cookies and cup cakes. She re-emphasized, that there was nothing special about them.

And then, it was her birthday. Her daughter Saee insisted that she wanted a Barbie cake. Gauri was apprehensive getting one ordered, because there were only four people celebrating. So, on an impulse she decided to make one. She told me that, “Even if it flops, there was no one else who will ever know of it. It was just my mother, husband, daughter and me. So, I took the risk.” Ofcourse, Mr. Google helped through. She says that to her surprise the cake turned up to be a great success. So, that was how she first stepped into making fondant cakes. Thanks to her daughter.

Then her second daughter Sayalee was born. Gauri again took a break from her dentistry, to look after her new born. But as time went by, she started feeling homebound and also somewhere a loss of identity took over. She recalls how there was a time, she just could not figure who she was anymore, apart from being a mother and wife. That was when she took over blogging. Her blogs started becoming popular and she started to regain her lost confidence. But she added, that though her blog was popular, it was not bringing in any money. Gauri has already lived a very independent life. Though her husband, who is also her best friend was always supportive, she still wanted to do something on her own.

Her house help, got her the first cake order through someone she knew, because she saw Gauri making some lovely cakes home. Gauri was not sure, if she wanted to make it a business. But when she put up the photos of her cakes on facebook, it invited a lot of attention. So, Gauri created her first cake for a client and she laughs how she sold it for just Rs. 300 because she was not sure if anyone would pay her. But that was when she decided to make it a business. She quips,”Not many could believe that a professional dentist could do something like baking. They did not really get the concept of being cake artist. But ofcourse my husband was supportive.”

To create her own album of cakes, Gauri first started baking her cakes and giving it for free to friends, relatives and neighbors. She created her facebook page and started putting up the photos. And then, just like the Mumbai monsoons, orders started coming in. She says that she never put any money on advertising her work. Facebook and word of mouth did all the magic. 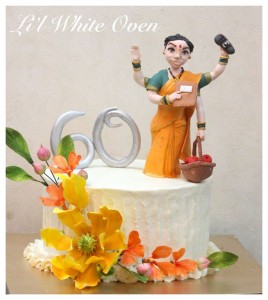 She perks up saying how every cake has a story, like the daughter who just called her up a night before for a cake. Gauri refused but the daughter said that her father was 80 and bedridden. Gauri just could not say a no, she worked over night and created a miner cake as the father was a miner. Another cake she just created was of a mother who turned 60. The cake was so beautiful that the lady refused to cut and cried. Infact she finally cut only the back portion on everyone’s insistence. So, that ways Gauri’s cakes have many tales to tell, in many occasions and homes. Gauri says, “Each cake has a story.”

She also recounts the moment she was invited to do a cake collaboration with Joonie Tan, Ashwini Sarabhai and Maaria Kulsum Tanveer. The theme was ‘Lost in Candyland.’ Though Gauri was delighted to be a part of it, she was not sure what to create. She discussed many ideas with her husband, who thought they were not good enough. It came to a point when she decided not to be a part of it, for lack of good ideas. Her husband asked her to give it a day. It was then when while travelling in   a cab, Gauri saw a bobbing toy in the cab and the idea of creating ‘Einstein’s’s tongue sticking’ figurine came into her mind. Her husband loved the idea. With painstaking efforts of two days Gauri created the cake. But that was when Mumbai was raining, so she had to work in an air conditioner otherwise her cake would just melt. Once it was all made, she kept the AC on and went to a few hours of sleep. That’s when the devil decided to have some fun. Someone by mistake switched off the AC. On waking up, Gauri found that half of Einstein’s face has fallen off. Gauri was half in tears and half in dazes. She cried for a few hours, ready to give up. Her husband asked her to give one last try, which she did and the cake was made. It was widely appreciated and finally distributed in an orphanage. 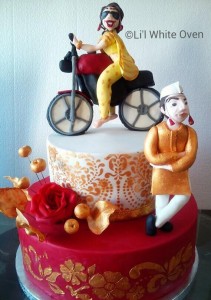 Her next step was to teach her art. Again she was not sure if anyone would want to really learn from her, but she was surprised by the response. The students flocked in, to learn the tricks and trades of the art and Gauri is now a proud teacher too.

As, our conversation now moved towards the finances, Gauri added with her brightest smile that she earns more than what her job as a dentist would have offered her.

Both her daughters are now growing up. They are getting busier in their little worlds needing less of Gauri. Now, Gauri want to owe her own studio where she can sit and bake. She says, baking at home, really creates a mess all over. It’s like having cakes and pieces of it all over the place. She also wants to continue teaching her trade.

As our conversation was coming to an end Gauri tells me, why the name of her bakery is Lil’ White Oven. It is because she started baking in a real small white oven when she started out. That oven was a gift from her friends on her wedding.

That was the journey of Gauri who was a dentist and now a happy, thriving home baker. She says that with each cake that goes out of her oven a sense of pride and contentment fill her from within. Like always, I put up my last question to her, what is that one thing she knows for sure, she smiles and says that, “If you really put your heart into something, it comes true.” She also adds, that how everyone discouraging her added more fuel to her dreams. She worked harder to be better.

Gauri smiled as we ended the conversation, but her unusual journey, warmth and deep humility stayed with me. The same warmth her cakes executes and creates stories everywhere it goes.

Like her beautiful cakes, Gauri too makes you happy, just by her bright presence.

You can connect with her here