Domestic violence can reduce most women to a cowering victim. This is a collection of narratives by 17 women who are survivors of domestic violence, and who have been courageously come out with their stories. 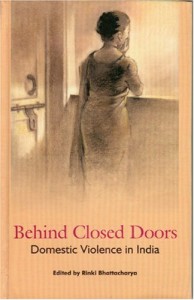 Domestic violence can often reduce a woman to a cowering victim. This is a collection of narratives by 17 women who are survivors of domestic violence, and who have courageously come out with their stories.

The book Behind Closed Doors has been compiled and edited by Rinki Bhattacharya, herself a domestic abuse survivor, who has also made the documentary Char Diwari, based on it.

The heartrending narratives bring home to us how widespread the problem is, and how no privilege can save a woman from a violent situation. Bhattacharya herself, the daughter of the celebrated film-maker Bimal Roy, and ex-wife of an equally celebrated film-maker Basu Bhattacharya, is a celebrated writer and documentary film-maker in her own right, yet she put up with domestic violence for almost 18 years and 20 more years after the dissolution of her marriage before speaking up.

‘Behind closed doors‘ are the operative words- as these incidents were believed to be in the sacrosanct family, and as such not brought out in the public. They still aren’t, for the fear of social stigma. Even the apathy of the powers-that-be can be guaged by the fact that the documentary has been aired only twice, that too late at night, when its audience would not be very wide.

There are essays by experts, feminists and workers in the field of domestic violence, who have tried to make sense of the phenomenon. How could women be marginalised like this in a country which worships the female form of Shakti, as the Goddess, or Devi? One essay argues that in certain communities, where the Devi is worshipped in the original form women still have a better position. As Sanskritisation took place, in the post-vedic period, a ‘spousification’ of this Devi took place, putting the husband above her, and fettering her feared unbridled sexuality. This is seen more in the upper classes, where the need for financial independence of the wife is not felt. There is also a busting of the myth that educated financially independent women do not face violence, and the reasoning behind that.

Further essays also talk about the Domestic Violence Bill and its loopholes, the introduction of a clause for ‘mandatory counselling’ that aims to preserve the family structure in its present form instead of redressal to the victim of violence. Police attitude towards women and their hand in the actual violence, lack of political will or even the attitude of politicians towards these issues play a big role in law-making, enforcement and any justice.

Each story sends a shiver down the reader’s spine. How did these women survive? How did they grapple with the physical, mental, and also spiritual wounds that such an unfortunate situation invariably leaves on the sufferer? As a woman, I could empathize with them, and came away with the realization that sometimes the effects are so insidious, that they can literally eat into the soul. There often might seem no light at the end of the tunnel, which can seem all-pervadingly dark and vast.

There is a road-map for support to victims at the end of the book, which could come in very handy.

A must read for those working in the field and those seeking an understanding of and a way out of the mess.

You can buy this book from Flipkart, Amazon India, and Amazon US.