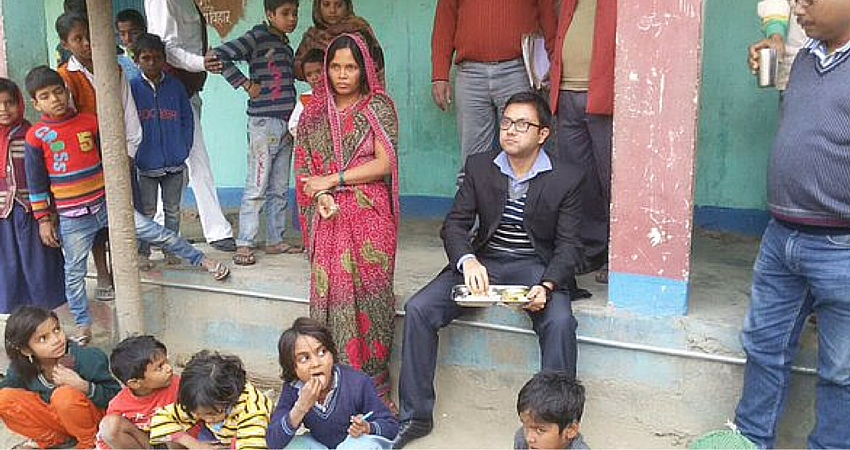 In a very recent incident in Bihar, the District Magistrate had to eat the food cooked by a widow, to break the superstition that she is an ill omen.

As, I am writing this, I am filled with mixed emotions. Recently social media was abuzz with the news of a district magistrate from Gopalganj, Bihar who ate food cooked by a widow to break the superstition that she is not an ill omen.

It so happened that Sunita who was working as a cook of the mid day meal scheme offered by the Govt. in a school in Gopalganj, was removed from her post in Feb. 2014 by the school administration. She appealed to the higher authorities, and on December 14 2015, she was reinstated. However when she went back to school, some villagers shouted at her and locked the school calling her an ill omen, because she lost her husband.

But on 17th Dec. when she went back to the school, after being assured by District Magistrate Rahul Kumar that there won’t be further issues, the villagers again started gathering in the school. That is when the district magistrate himself went to the school. And when he saw that it was already lunch time, he wanted to send a strong message to the villager. He decided to eat the same food Sunita cooked. Once he did, he broke the superstition of Sunita being a bad omen.

Since then Sunita has been cooking in the school, without any trouble.

Yes, it is a great thing what the district magistrate did. We fully support him. But let us think of it this way. This is 2015 and we are still struggling with treating a widow right.

In India, as far as I have seen, it seems widows are there for penance. As if a crime is committed and that woman has to pay the price. Let’s talk about the ashrams at Vrindavan, where widows stay. Have you ever wondered, why so many old women are abandoned? If it is a crime to be a widow, why is it not  a crime to be a widower? Its only now, after efforts of NGOs and social activist widows of Vrindavan are taken to play Holi and celebrate Diwali. I have never ever seen a widower ever been stopped from any celebration. Why is that white is for a widow and not for a widower?

In certain old religious books, a widow is not even mentioned by her gender but as ‘it’ or as a ‘creature.’ Widows have to give up celebrations, fast, wear white and pray, as if pay penance for a crime.

I remember a lady, near our house. My first memory of her was that of a widow. Her name was Vidhya, but she was called a widow. If someone is going somewhere and she just enters the house, the person would go backwards and will not leave immediately. It was the same way, people behavewhen a black cat crosses the street. At weddings she would never sing the songs with others or sit near the bride. Till she died, her only identity was that of a widow.

But then it came home, when Dad expired. Mom is educated and working .On the 13th day as a ritual we have lunch with the whole community and serve fish. Widows are supposed to be vegetarian. But it was my paternal Grandmom who declared that Mom will eat non vegetarian. Interestingly her own parents did not support it, no matter how much they grieved about my Dad’s death, they never wanted Mom to touch non-vegetarian because she was a widow then.

Once when Mom started to going to work, Mom wore white first but it was again Grandmom who said, she should wear colors. She even said that whatever clothes she gave Mom at her wedding, she should wear them too. It was because Grandmom took a stand Mom could lead a normal life. I could never understand when a woman is already suffering so much mentally, why do people impose so many unnecessary rules on her as a reminder that she lost her husband. It again repeated when my uncle died. It was my mother who stood by my aunt. And what is so fascinating that it is her parents who opposed. And her father refused to eat the food, that day.

And, the greatest tragedy is that it is also women who carry and enforce them.

And, the greatest tragedy is that it is also women who carry and enforce them. In Assam, there is a 7 day period, where every ritual or worship is closed down. It is said, that Goddess Kamakshya goes through her menstruation. We don’t even till the land or pluck flowers. They say, the earth goes through her menstruation, and so we should let her rest, without any disturbance. Logically, if I see, I think, this process was begun to be in rhythm with nature. We take so much from nature everyday, till, tear and stamp on it. For 7 days, the earth is given a break.

But then, there is one ritual, that is practiced, which takes us back to dark ages. Widows have to fast. And the thing is that what you eat during fast, people come and give you. Though I was hardly a 11, I resented every bit of it. My mother is an educated working woman, she needs no donation. I specifically remember this woman, who is a family friend. Whenever she came to give stuff, she had a smile on her face. I always felt humiliated, just by that one smile. I had so much of anger and resentment that may be that was when I turned into a Feminist subconsciously.

A year later, our neighbor lost his second wife. But then, there was immense pity and grief about his loss, no rituals or he was never a bad omen. People always were softer to him, but not to the women. I know, I could not do much. Who listens to a 11 year old? In our society, children are not heard. I learnt to live with deep seated resentment and anger, until I took to writing. That anger still stays.

Yes, it was a great act what the district magistrate did. And it needs to be done everywhere. In every town, street and home. Most importantly, like my Grandmom, every woman need to stand up for the other woman. Otherwise, we will still be in the dark ages, where a woman is a creature and not a human being because she lost her husband.