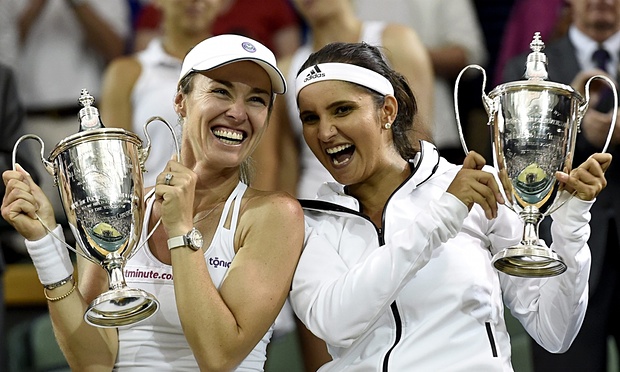 As Sania Mirza wins the Wimbledon Doubles title, the tide of adulation is in strong contrast to the sexist abuse she has faced over the years.

Sania Mirza has created history. She is the first Indian ever to have won a Wimbledon Women’s Doubles title. The Sania Mirza – Martina Hingis duo played against all odds and won Wimbledon 2015 yesterday. Ever since, social media is abuzz with congratulatory messages. Suddenly, ‘Pakistan Ki bahu’ has once again became ‘India Ki Beti’. Everyone seems to cherish her victory. Strangely, this time the length of her skirt or the fact that she is married to a ‘Pakistani’ doesn’t come in the way. The whole nation is celebrating the victory with her.

Sania has always been targeted for her choices. Her skirt garnered much more attention than her game. In July 2014, a political leader from Telangana went to the extent of calling her the ‘daughter-in-law’ of Pakistan and hence unworthy of being made a brand ambassador in India. It clearly reflects the deeply embedded sexist thinking which devalues every single achievement of a woman.

Sania Mirza wearing a skirt creates a stir while Aamir khan standing butt naked hiding his manhood with a radio makes the film the highest grosser of the year. She is attacked verbally, fatwas are passed against her. And why? Because she is following a dress code which is an international norm and because she is a woman and skirt-clad.

Sania Mirza marries a man of her choice and is labeled a traitor whereas Dharmendra changing his religion just to marry Hema Malini doesn’t bother anyone despite his being already married with children. Not just him, many others too have remarried flouting the laws of this country and yet face no consequences. Why is Sania Mirza so targeted? Because she is a woman and a celebrity.

The same rules don’t apply to men. They can flaunt their bodies, roam around in chaddis, lungis or sometimes carrying just a radio for that matter. They are free to marry whomsoever they want, and remarry for love or lust. It’s neither anti-religion nor anti-national. It clearly indicates that even religion has different guidelines for men and women or so we are made to believe by the self-appointed protectors of religion.

From centuries, women have been shouldering the burden of righteousness and modesty. From their exposed heads to a layer of tissues between the thighs, everything become a matter of ‘Izzat’. Every day, women are insulted, abused, molested, raped. Yet that doesn’t create as much public outrage as a girl wearing a skirt determined to bring laurels to the country. People can’t digest the fact that the women can grow out of the shadows and make a mark for themselves.

All these controversies Sania Mirza has been dragged into expose the dark underbelly Of Indian Society. Sexism is deeply rooted in our mindset. We can’t think beyond the narrow bylanes of gender and social prejudice. No matter how strongly we claim to be a liberal and developing nation, let’s admit that we still treat our women as our property. Nothing more, nothing less. Women are meant to be owned and governed. We, as a society, might not come together for a valid cause but we show astounding unity while slamming a woman for her life choices, be it choosing a career or a man. A woman doesn’t have that liberty unless sanctioned by a man.

All the attempts to drag Sania Mirza down have proved ineffective. She has risen like a phoenix every time her wings were clipped or burnt. Whether a section of this society likes it or not, she is one of the most successful women players ever in the history of Indian sports. And no one can take that from her.

After threatening and attacking her for years, its time that the nation gives her her dues. Let’s for once thank her for taking the game to amazing heights, getting wounded and fighting back like a true warrior; despite being devalued and disowned by her own country, yet saying, “I am an Indian and will always be an Indian until the last day of my life”.

Sania Mirza is a role model. She has and shall continue to inspire generations of women who harbour a dream. All those who still wish to target her can crawl back to their tiny holes and continue living under the stones. She has paved the path. Now others shall follow.

This country shall see many more Sanias in time to come. No one can stop that.We are proud of you, Sania Mirza!

Sania Mirza Gets Trolled For Not Taking Care Of Son’s & Husband’s Diet! When Will Schooling Moms Stop?