Dil Dhadakne Do: A Movie That Urges You To Listen To Your Heart [Movie Review]

Dil Dhadakne Do, directed by Zoya Akhtar, inspires and encourages you to listen to your heart and hear the inner voice that we conveniently ignore. 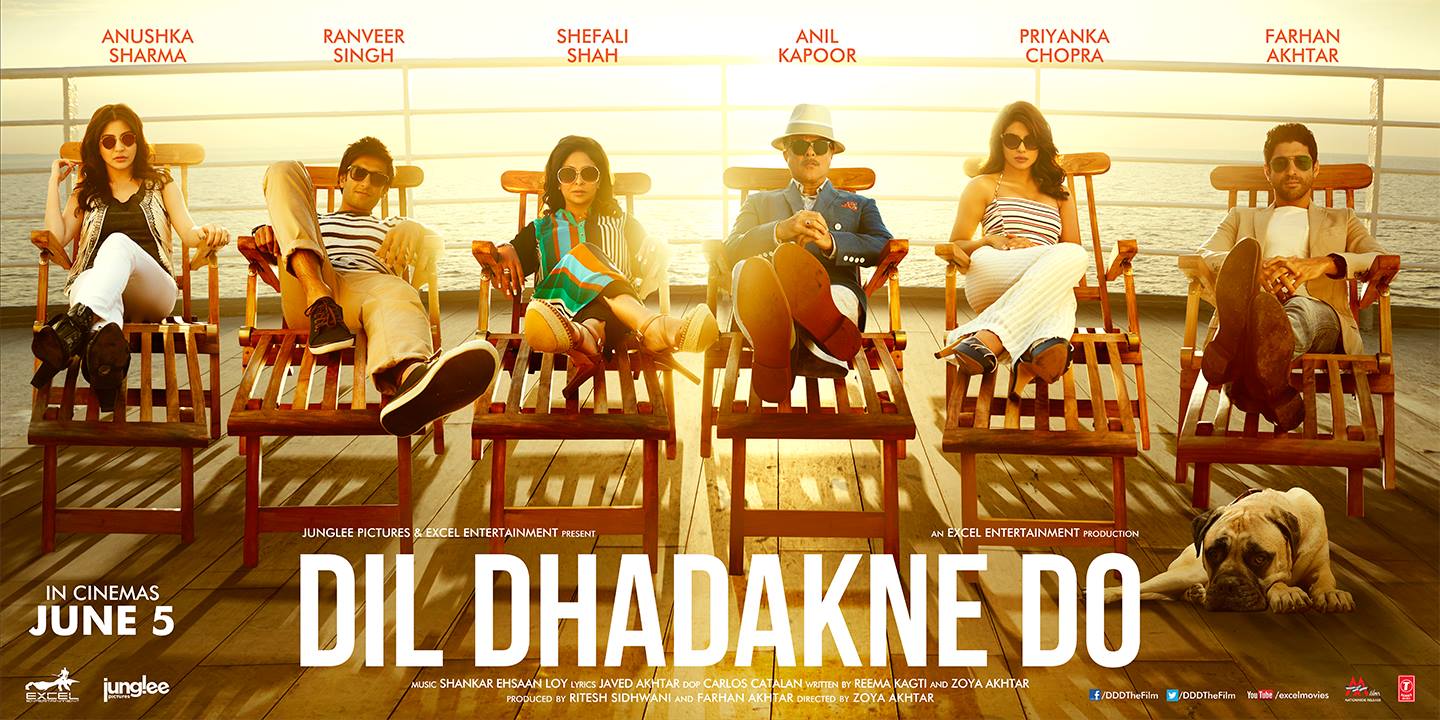 The focal point of the movie is the Mehra family and the dynamics their interpersonal relationships hold.

A rich Delhi-based business family, the Mehras consist of four members who together make a unique, noteworthy unit for a simple reason: This family is a living, moving, breathing piece of hell. A hell they have created themselves with their supercilious attitude and confused selves.

The senior Mehra in the movie is played by Anil Kapoor with great panache. He is a man who talks, eats and breathes success. For Kamal Mehra, it seems as though people or things are not divided into good and bad. They are, in fact, classified into successful and unsuccessful. A man with salt and pepper hair, a suave, charming demeanour and a way with women, he is in reality a businessman desperately trying to save his business from falling apart and has no qualms in being ruthless in crushing people’s emotions and sometimes, people who come in the way of his path to success. A handsome man who thinks it is his right to be high and mighty, he has drifted far away from his roots and it seems, life in general.

Kamal Mehra’s wife Neelam Mehra, played by Shefali Shah, is a feisty woman. Prim and proper, with elegance and élan, she is fully, completely, wholly and painfully aware of her husband’s philandering ways but decides to turn a blind eye to his deeds because for her, concentrating on making things work in a relationship is more important than running away from it. A woman who is bitter from the inside but hides her insecure self behind the veil of a posh life, she works hard to give an impression of being happy and content in the marriage.

Ayesha Mehra (Priyanka Chopra)  is sensitive to the fact that her parents conveniently forget her success and advise her to have a child so that her world is ‘complete’.

Ayesha Mehra (Priyanka Chopra) is the eldest child of the Mehras. A successful, self-made woman caught in a loveless marriage, she has inherited her father’s sharpness and business acumen. A calm and mostly composed woman, she is sensitive to the fact that her parents conveniently forget her success and advise her to have a child so that her world is ‘complete’.

The youngest Mehra, Kabir , played by Ranvir Singh, is a man who at heart is still a boy trying desperately to come out of the shadow and protection his moneyed family provides him but is too scared of the outside world and fears the discomforts that he might have to come across.

The story spins around these four central characters and their perspective of life.

Yet again, Zoya Akhtar with her direction has proved that life and its meaning can be found amidst humour, chaos and confusion. The stark reality of hollow ‘high society’ relationships is depicted with good humour and accuracy. The people in the movie are believable. They are flawed and that makes them real. Every character in the movie is like someone we have all come across at some point in our life. Those pretentious women whom we all know, who thrive and grow wholly and solely on the husband’s income and success, who may not know the difference between a planet and a star but would surely know the details of their neighbour’s household including their extramarital affairs. Men and women with those fake smiles and pompous hugs, those sly smiles are captured with great detail and accuracy. I can vouch for the real life presence of such ostentatious humans. The brother and sister duo of Ranvir and Priyanka captures the raw and crude relationship that siblings often share. The quick glances, the winks, the looks that make the sibling relationship fun are portrayed precisely.

The simple fact that a marriage might not work because two people are not compatible enough is sometimes not enough for people who sit ready to judge how others live their lives.

Apart from the humor, the movie also treads on some dark issues that we face in our day to day lives but shove under the bed and refuse to acknowledge them for the simple fear of confrontation with something that does not align with the society’s idea of ‘normal’. The simple fact that a marriage might not work because two people are not compatible enough is sometimes not enough for people who sit ready to judge how others live their lives.

There is a scene in the movie where Ayesha explains she does not have the feelings that a wife should have for her husband and wants a separation. Her mother-in-law is quick to jump in and advise her that if there is no violence, no affairs, no tabs kept on the wife’s pending, the marriage is perfect and just needs to be worked upon. She is seconded by her son who thinks he has ‘allowed’ her to do to live as she wants and by ‘allowing’ her, the family has ‘invested’ in the woman. The magnitude of wrong in this sentiment is very obvious and at the same time much ignored in reality.

Another aspect sensitively portrayed is how a couple who fell madly in love with each other, who built a life for themselves, can drift away and become complete strangers living under the same roof. Sometimes, in a rush to run the race of life, we forget what we are, what we are made of, what our friends are, what love is, what companionship is. A question by a wife asking her husband why he forgot her, can make us realize how easy and simple it is for a relationship to die in the course of life.

The movie, on the whole, is a good watch with a dramatic Bollywood masala ending. The screenplay is effortless and very natural. The problems faced by the characters are believable because they are as confused as anyone of us. The movie touches a lot of things that make us question the double standards embedded in the layers of the society, but, it just brushes past them.

Dil Dhadakne Do does not solve any problems or try to give any alternatives. It simply urges one to live and think and be as one pleases. It gently asks us to be how and what we want to be. Let it go, let your hair down and run with open arms towards a life of honesty which is not owned by anyone but one’s own self. That is all the movie tries to say.