Will you let her fly? Girls are born to fly, but we try to keep them on the ground as much as we can. 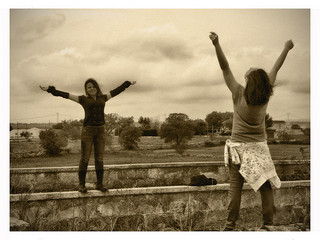 Will you let ‘HER’ fly? They ask me
Emphasis is on the ‘HER’, I sense.

She was born to fly,
And fly she will.

Are you sure? They ask me
Yes, I’m sure, I say.
I’ll even give her wings and show her the sky, I say.

She was born to fly,
And fly she will.

The skies are meant for HIM, They say.
He was born with wings, you see.
She is meant to stay on the ground,
Well rooted and grounded, They say.
Also, it is safer down, They say,
And you can keep an eye on her, They say.

In the sky, there are many perils, They say,
The strong winds, the rains and other beasts;
You never know who can harm her and how
So it’s better she stays on the ground
Far away from the many dangers, They say.

Do you think there are no perils on the ground? I ask
No.. But at least you are near her, They say,
You can protect her, you can help her, They say.

But will I be there forever? I ask.
And can anyone protect her always? I ask.
Sometimes, some battles she should fight alone, I say,
Better to make her strong and independent, I say.
Hmm… They don’t say anything. After some silence, they again ask,
Who will teach her how to fly?
And who will give her wings? They ask me.
Not many wings are made for her, you see, They emphasize.

I will give her wings and teach her to fly,  I say,
And if required, I’ll fly with her to touch the skies, I say.
But you don’t know how to fly, They point out.
I’ll learn. It’s never too late, I say.

What if she does not want to fly? They ask.
Everyone was born to fly, I say.
Both HE and SHE, I say.
But for her, wings are cut early,
And the sky is well hidden, I say.

And for him, the wings are nurtured,
And the sky is shown every single day, I say.

And what if she falls? They ask me.
After every fall, there is a rise, I say.
She’ll get up, and I’ll be there..
I’ll nurse her wounds, wipe her tears, hug her tight,
And nurture her till she can fly again, I say

And what if she’s scared to fly again? They ask.
I’ll swish her fears with my magic wand, I say.

And what if she does not come back? They ask.
She will, if I call her, I say,
But I’ll let her decide her journey, and
when she wants to come back, I add.

Are you sure? They ask.
Yes, I’ve never be more surer of anything in my life, I say.

She was born to fly…
And fly she will.

She was born to fly
And fly she will,
To the farthest lands,
To the world of dreams,
To the moon and stars,
To the rainbows,
And then back to my arms.

Today’s changemaker that we’d like to highlight is the Campaign Against Sex Selective Abortion (CASSA), a coalition of women’s organisations, research and educational organisations and human rights groups, based in Tamil Nadu.

The coalition works to create awareness about the PCPNDT act that makes testing for the gender of the foetus illegal and a punishable offence in India. They also work with government organisations including primary health centres to monitor the implementation of the act, especially in specific districts of TN where the declining sex ratio is a matter of concern and to collect relevant data on the subject. If you have some expertise that allows you to be of aid to this campaign, do contact CASSA.