What was Aanand Rai, Director of Raanjhana thinking when he made a movie glorifying street sexual harassment? 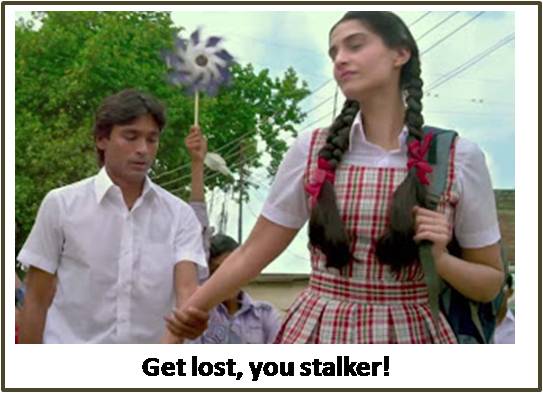 I happened to watch your movie 2 days back.  This is your 2nd movie I am watching, the first being Tanu weds Manu.   Good choice of actors here, Sir.  Dhanush and Sonam because of their physical attributes can be used to play characters more than 10 years younger than their real age.  You must have saved a lot of money there. I liked the acting skills of your actors, but about the story I have to give you some gyaan, Sir.  Please don’t say no, this is free of cost.  I will not charge you. (Note, this is not a review but contains some spoilers – Ed).

Pssst, Sir I have a secret to tell you, When a girl says NO it means NO.  What Sir, you tried to show that a 10th Standard boy gets a 9th Standard girl to say ‘Yes’ to his so called proposal by slitting his wrist?? At the age of 15 obviously the girl got scared and said ‘Yes’.  Did you know that the reason parents are advocating that their girls marry off early even before finishing school, is exactly because of such menace.  So I have a question Sir, if after watching your movie some 10th Standard boy does the same and the girl still says NO then what should he do next?  What would be the next gruesome step you advocate?

But in the same movie, another girl Bindiya is head over heels in love with our hero Kundan, but see, she is intelligent and instead of slitting her wrist she believes in feeding cows!  I am grateful that you projected women in a good light here and tried to tell the audience that women have more common sense even if they are madly in love with someone.  But Sir, why were you hell bent on showing that men are dumb?

Then you show our Heroine Zoya comes back after 8 years and announces her fairy tale love story with another man.  Your hero again goes and slits his wrist.  What is this, Sir? You are an intelligent person no? You should know such a person needs mental treatment; you have shown him highly suicidal.  At a point I thought that even if Zoya sneezed loudly, our Hero Kundan would slit his wrist! And let me tell you another secret Sir, women have a brain of their own so even if by any chance our Hero ended up marrying our Heroine then by the time they celebrated their 1st anniversary the Hero would not have any blood remaining because every time his wife did not listen to him (which is quite obvious since she seems more intelligent than him) he would slit his wrist, no?

Sir, you have left no stone unturned to show that a girl can be scared and forced into a relationship, but you did not even leave her parents. When you showed that Zoya’s parents are been conned by the team into believing that her lover is a Muslim, I want to know what happened to his parents. Yes Sir, the same parents who came from Punjab to see him when he was in hospital.  Are you trying to say that Zoya’s conservative family was getting their daughter married off without even meeting the boy’s parents? You really think that a girl’s parents can be stupid, don’t you?  Here is another secret Sir, even if they consent to a love marriage the parents like to do a background check!

I don’t even want to mention all the other potholes in your movie Sir.  Like how after they realize their daughter was having an affair, Zoya’s parents send her away somewhere all by herself! Another fantastic thing is in the entire 8 years they never knew who the boy was? You just loved showing them as dumbos didn’t you?

Sir, you have a great medium ‘Cinema’ to educate our country against all these crimes like rape, forced marriages and street harassment.  I would have really appreciated if you would have used it in the benefit of eradicating these issues rather than promoting all these problems further.  There are a lot of people like myself who wish they could make a difference, but don’t find any medium other than the occasional outburst on the social media, but you have your chance Sir, you have access to the world with your camera and screen, why not use it to make a difference?

So it is a humble request Sir that you do not glorify such suicidal elements to a heroic level in the society. Because then this really further motivates the already aggravated society against the freedom of women. You will not understand the pain of feeling scared to go out just because some maniac is ready to attack you. So Sir I hope this letter of mine reaches you and you really read this with a open heart and hopefully some sense will prevail upon you.

A woman who is constantly fighting for her right of freedom to choose.

Sunita Kurup Sapru a.k.a SuKu calls herself an ordinary person with an extraordinary life! A freelance writer, she says, “fun” is her middle name. You can find her blogging at Sukupedia