As the Ford India ads demonstrated, women in Indian advertising are often mere props, and even violence against women can be 'humour'. 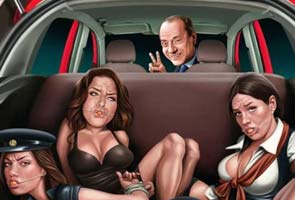 Prashila Naik is an aspiring writer from Goa, who also happens to be slogging at a daytime technical job which is miles away from these apparently artistic aspirations she harbours. A “hopeful cynic”, she longs for the day when every child in India will have two complete meals to eat and a permanent school to attend.

I read recently a news item about a top advertising agency in India firing some of its employees, who were allegedly involved in the conception and execution of one of its ad campaigns in India that was designed for one of the most respected automobile makers in the world.

One poster version of the ad shows a caricature of the former Prime minister of a country that is currently in the midst of a sensitive, diplomatic stand-off of sorts with our very own country, sitting inside the car (for which this campaign was designed), a smug smile on his face, his index finger and middle finger arranged such that they make a  “V” sign. And why is he flashing that V sign? Well, because he has three extremely well endowed women – even if there is a clear expression of discomfort on their faces – all gagged and tied up inside the trunk of the same car. ‘Leave your worries behind’, is the slogan. Tell us what exactly is funny?

The automobile’s India operations instantly issued an apology for this advertisement. The ad agency instantly fired the creatives responsible for coming up with this campaign. All round statements were issued saying how this was an “unapproved” ad and that it was never commercially used and that it was a ‘scam ad’, created only to be used as an expression of ‘creativity’ and an entry to award shows.  More startling discoveries followed and more sackings.

But one thing is clear. Everyone (well almost) agrees that there is apparently nothing right going on with this sexist campaign. Even the creativity aspect is debatable, considering the product and its target audience. In a country that is already reeling under the aftermath of the daily horrors of atrocious crimes being committed against her women, how can something like this even be considered ‘funny’ or ‘smart’?

Ad makers in many situations have never been kind in their representation of women. A fairly recent ad for a toothpaste showed a young, smartly dressed yuppie, ‘empowered’ by the toothpaste’s freshness, representing the center of a wall clock, a woman on each of its 12 markings. With the 12 hour long freshness by his side, the man ‘ticks’ down the clock, dancing with one woman, flirting with another, well… you get the picture. If this is not objectification, what is?

Another ad for a fairness cream showed a young woman unable to become a ‘beta’ to her father by not being able to get a job just because she was ‘dark skinned’.  I won’t even go into the terrain of the commercials for male deodorants. What role women have to play in there, we all know…

Before anyone tells me to ‘take a hike and develop a sense of humour, this is just an ad after all’, I would like to clarify that I do know this is just an ad, but that doesn’t take away the fact that it is still irresponsible, something that is put out on a display for everyone to see – men, women, children, everyone. Women are used as mere props or as hapless figures that need redemption in some form or as mere objects that one can only lust on and all these ideas coming from men (and women too) who are all well-educated, well-travelled and with a ‘progressive’ attitude that should certainly be able to see women as not just sex objects or just beings waiting to get attracted to the first deodorant wearing man coming their way.

Creativity or the ability to be creative does not mean one only does their bit to enforce stereotypes that are already so rampant. At a time when the Indian advertising industry is experimenting with ideas and coming up with ads that are not only creative in the true sense of the word, but also genuinely funny and/or heartwarming (the recent Frooti ad with SRK comes to my mind or even the absolutely delightful IDEA Valentine day ad with the elderly couple), such stereotypical ads only stand out like a sore thumb.