Are you a feminist who doesn't know it yet? Dilnavaz Bamboat explains how feminism has a positive, empowering message 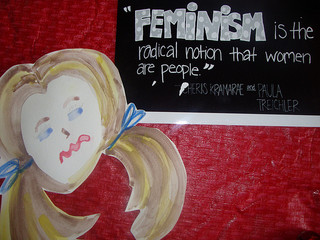 Several weeks ago, I had a conversation with a fellow writer who categorically stated she wasn’t a feminist. Intrigued, I asked her why she took that stand. Her reply was that she did not support the causes feminists seemed to espouse and claimed they all spoke from a place of disadvantage, which she did not agree with. I attempted to gauge what her definition of feminism was, but was met with the same spiel about ‘feminist causes and life viewed through a disenfranchised lens’. An effort to engage her in further conversation in this vein bore no fruit as she repeatedly insisted she was not a feminist, and since we were at a social gathering, we moved on to other topics.

Obviously, I didn’t really move on, or else I wouldn’t be revisiting the scenario today. Her stance struck me as poorly informed, dismissive of changes in the field, and representative of a narrow lens. Anybody with access to a dictionary will know that

feminism, n., is:  a doctrine or movement that advocates equal rights for women

Equally, it is: feminism, n. Belief in the social, political, and economic equality of the sexes

But what struck me most was her statement that feminists uniformly speak from a place of disadvantage. Feminism, in its earliest days, was certainly a movement that spoke for a disadvantaged population, viz., women, and it is clear that impressions of suffrage marches in very Victorian bustles and bra-burning scenes from the 1960s and ‘70s are still seared in our historical memories in 2012, never mind that we weren’t alive to witness either chain of events when they happened. But how much of feminism is still about getting up on that soap box and carrying on about what we don’t have? Do women who continue to live in a patriarchal world, albeit with shrinking disparities in gender rights in some quarters, still view the opportunity for social, political, and economic equality as an issue to rage about, or has their perspective changed with the times and they now acknowledge their relative privilege as a tool for continued work in the field?

I choose to see the world through the latter lens. For starters, the fact that feminism is discussed, reviewed and organized by educated men and women across a number of media makes this an emerging portal of strength. The fact that this position of relative power is used to access underprivileged and underrepresented women speaks to me of feminism as an agent of power and positive change. Modern-day feminists, for those of you who care to read about the subject, discuss everything from the liberty to take the Mommy Career Track to whether women should continue to be upholders of religious ideologies if they choose not to.

Feminism as an ideology and movement has long moved beyond gender, to a more inclusive, class-friendly space, where people, men, women, and transgenders, use their individual and societal strengths to reach out to those who have yet to emerge from their position of disadvantage. Feminism is certainly about turning disenfranchisement and a lack of access to patriarchal resources into a system that shares its bounty with all people, regardless of gender, age, or sexual orientation. Equally, it is about a belief in parity, even for men who are at the receiving end of abuse, ill-treatment or powerlessness. In her book Feminism is for Everyone, bell hooks says feminism is, “a movement to end sexism, sexist exploitation, and oppression”. Without men, feminism would not exist. Without men, feminism SHOULD not exist.

If we are to live feminism in its truest form, cut away the pop culture tangles, clear away the misconceptions and frequently-blared stereotypical images, we will find that feminism has long ceased to be a sorority party high on outrage, and wears its rainbow colors proudly. It has a sense of humour. It has an army of millions of diverse people, who approach it from personal stances, with varied histories, and a range of experiences, and it is from this new version of an old ideology that feminism finds its position of strength.  Now may those of us who have long dismissed it as foaming at the mouth find the strength to reassess our views, broaden our horizons and embrace this supposed monster with greater understanding.

Like I told my acquaintance during our conversation, ‘most everybody is a feminist. Some of us just don’t know it yet.