We think of the 'other woman' as the siren breaking the rules of society, but every woman has an other woman waiting inside her own head 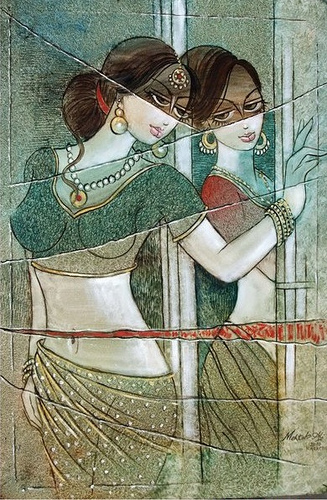 All your life, as a girl, then adolescent, then woman, when you hear whispers of the Other Woman, people exchange tales of an adulteress, a siren, home breaker and man-stealer, someone who, with her smoldering sexuality and evil intentions, is instrumental in wreaking havoc, causing hurt, and challenging The Rules. Why, then, does nobody tell us about the woman inside our mind, the one who will fight us to the bitter end, unleashing monologues and scathing critiques, questioning our decisions, weakening our resolve, wreaking havoc, causing hurt and challenging or subverting The Rules?

I grew up with certain beliefs about feminism, womanhood and gender roles, fed overtly and by example, by the leading ladies in my life production—Mum and Nana, and Granny to a lesser extent: You don’t have to get married, just earn your own living and enjoy your life.

Not having children isn’t the end of the world. (Oh, but children are such a joy!)

Earn your own money.

Maintain an immaculate home and be proud of it.

And never take crap, because anybody will be lucky to have you.

Believing in their correctness, I followed the rules. Didn’t particularly dream of marriage. Wanted a child without a spouse. And thankfully, acted on neither situation until older age and better sense prevailed. I’m glad I’m not among the cousins who got married and had babies in their twenties, both choices made to escape other circumstances, and then were consumed with rage that they didn’t get to live their lives fully.

Sure, I had my own single girl stuff happen to me, and some of it was deeply unpleasant, but I was spared the irreversibility/messiness of any situation by access to finances and freedom from legal or birthed relationships. But is this a rant to whoop about how I think I did it right? It is not. For just like everybody else, in spite of making plenty of choices she would agree with, the Other Woman houses in my head, waiting for her day to picket.

She first reared her head when I decided to sign on the dotted line. “Really, marriage?” she smirked, and I ignored what she wasn’t saying. Which was that I still consider it not entirely necessary. “For the visa, “I shrugged, taking refuge in legalities. “No one’s going to let me enter the U.S. on Love-of-His-Life paperwork.” Not entirely convinced, she held her tongue and watched me with something resembling amusement as we put together a ceremony and celebration skimpy on rituals and symbolism, and rich with love, support and things that held meaning for us.  (She even forgave me my enthusiastic color-coordination of the reception party, décor, outfits and all. And if you must know, the colors were ivory and cerise.)

She had nothing to say when I drove all through our honeymoon, far from the demure bride with her man at the wheel. Oh no, rocks will ooze tears sooner than OW spills praise. I merely smirked and gave her a bump of my bum when no one was looking. I needed to exult in little victories because the real battle was yet to come.

And come it did, as soon as I arrived in the United States on a dependent visa.  “Dependent,” she mocked, reminding me of all the times I was proud to be an independent visa holder during my previous U.S. stint.  “It isn’t so bad,” I answered truthfully, because I had carefully selected this particular visa for permitting me to work without sponsorship. Silenced for the time being, she retreated to her cave.

Then came the forms. In their multitudes. Asking me for an occupation, demanding a response. Cringing, I scribbled ‘homemaker’ and waited for her to appear. Lurking just around the corner with a twisted smile, she showed up and delivered. If paperwork has been oft-quoted as being the death of civilization, consider what those forms did to me: They made her push me off a guilt cliff, contort me through a wringer, shoot darts into my self-esteem and cackle at each pop. And all the while you would only see a woman seated calmly at a desk, filling out reams in her best handwriting.

As soon as my work authorization came through, I got a job. And my revenge, and a temporary reprieve. I was back on a familiar horse again, the working woman with a respectable bank account. I ignored how much I had loved playing house, repressed how I prided myself on a clean and tidy home, and focused instead (admittedly, with pleasure) at the rising levels of green in the bank.

You’d think she would go away. Make her peace that the war was won and leave me to deal with long hours and homestead disarray. Someone clearly modeled cantankerous mothers-in-law on this creature in my brain, for oh no, she wasn’t going anywhere, no ma’am!

“Your mother and grandmother were working women too.”

“They had help around the house. ”

“And a home three times the size of yours.”

She had won again. I grabbed her celebration cocktail and drowned out her cackle in one gulp.

Maybe alcohol’s the solution, you say? Let me know if it works for you. For as different as we all are, I know this to be true: we all have a version of the Other Woman in our head, telling us the way things ought to be, torturing us for changing our minds and choosing to be different women. I see it in the stories around us. In Anne’s piece about cooking and the modern Indian woman. In Anindita’s postabout discovering a love for baking and fear of turning into a ‘PTA mum’. Whatever our script, no matter how flawed, she won’t let us deviate. The Other Woman is cruel, illogical and unbending. She waits for digression, she seeks war. This past Spring, I resigned from my job to travel and write. Did some of the former and a smattering of the latter. And as I go through my second stint at not being at a full-time job, even though it is entirely by choice, she pulls out her armory and descends, all guns blazing.

But if you laugh at her angst and refuse to partake in it, leave her muttering in a vacuum and turn your back, hug yourself and show her the middle finger, and remember you’re worthy—unemployed, messy home and all, she slips behind the trees and stares at you daggers, because you’ve taken her power away. Maybe I’m oversimplifying this and it isn’t that clear-cut. But try this relentlessly, if your patience permits. It may take weeks and months and years, and she won’t let you gain ground easily. I haven’t triumphed by a long shot, so I won’t preach like I know all about it.  But this I do know, on a rational level at least, that without my consent, she’s a slip of a shadow who will have to find a new dwelling when I boot her out–one that will have her less grudgingly than I did, and hopefully one that’s a long hike away from my brain.