The Other Woman anthology broadens the narrative of adultery to go beyond the usual themes of seduction and guilt. 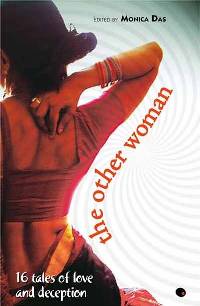 The Other Woman anthology broadens the narrative of adultery to go beyond the usual themes of seduction and guilt.

Home breaker. Husband-snatcher. Many are the names thrown at the “other woman”, often viewed as the third spoke in an otherwise perfect husband-wife wheel. While the philandering husband gets away, it is the other woman who faces opprobrium for being a “temptress” and for her low moral standards.

The Other Woman, a collection of 16 short stories on the subject caught my attention while browsing at an airport bookstore, and I picked it up hoping that it would bring something new to the discourse. It doesn’t disappoint.

Edited by Monica Das, and containing stories from stalwarts such as Mahasveta Devi, Amrita Pritam, Sa’adat Hasan Manto, Jayakanthan and M.T.Vasudevan Nair, The Other Woman is engrossing and versatile in every way. For starters, it draws on stories from a breadth of Indian languages, bringing to the reader many different settings, urban and rural.

Even more importantly, it brings the idea of the other woman down on its head by presenting her in completely different avatars. From the unattractive Manorama in Sunil Gangopadhayay’s Our Manorama, who is at once a guilty pleasure and a treasure to be guarded, to Damayanti in Indira Goswami’s The Offspring, driven to illicit relationships by poverty, and yet conscious of caste-purity, no two women in these stories are the same.

One of the results of this multiplicity is that the stories as a whole move the narrative of the other woman beyond guilt, encroachment and morality, even as they deal with these subjects, among others. The other woman is no longer a shadowy seductress, but every woman. In my favourite story from the collection, Mahasveta Devi’s Chinta, the other woman becomes ‘other’ not to a couple, but to an entire community.

Even in stories from the wronged wife’s perspective such as Amrita Pritam’s The Unfortunate One, it is the ordinariness of human beings and their relationships, including adulterous ones, which becomes evident.

If at all there is a grouse with this anthology, it is that in including stories translated into English from many Indian languages, the quality of translation has not always been taken into account. Happily, this is only in a few cases, with the majority reading very well indeed.

If you’re willing to look into the grey areas of relationships and reserve judgement for a while, The Other Woman is definitely worth your time.

If you’re planning to purchase The Other Woman, do consider buying it through this Women’s Web affiliate link at Flipkart. We get a small share of the proceeds – and every little bit will help us continue bringing you the content you like!