Announcing the results of the Women’s Web I Stood Up Blogathon – inspiring women speak out against sexual harassment, injustice and violence 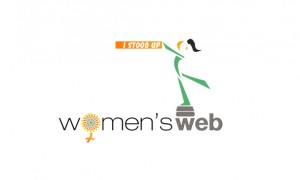 Announcing the results of the Women’s Web I Stood Up Blogathon – inspiring women speak out against sexual harassment, injustice and violence

We’ve had some great responses to our I Stood Up Blogathon and we enjoyed reading through all the remarkable entries. Every single incident where women have stood up – be it at home, in public places or at work – has been truly inspiring! Kudos to each and every one of you for boldly standing up and speaking out!

Jo Chopra McGowan for her wonderful entry urging us to strengthen ourselves to stand up for people in need: “No one ever expects a disaster. By continued, regular practice in calm moments, when there is no danger, we develop the skills to respond purposefully and without panic when there IS danger.”

Nishatha for her cathartic post about exorcising the demons of child sexual abuse: “I was six, too young to have stood up for myself. Too young to have brought into open his actions.”

Deboshree for her beautiful story on how she refused to accept gender stereotypes as a young girl waiting for her school admissions: “I did not want to make a roti Ma’am. I wanted to make a ball. And look, I have made it!”

Congrats Jo, Deboshree and Nishatha! You win a Flipkart voucher worth Rs. 500 each!

Saru Singhal shares how she stood up against something that unfortunately every Indian woman is quite familiar with – sexual harassment in public transport. She reminds us that every woman has “The Power to Create, Nurture and Transform.”

Rituparna lists the various times that she has stood up over the course of her life, stating “I have refused to consider that my life and career are over. I am instead looking at being reborn. To fight again. To carve out a niche as a woman and mother. Today I am not afraid and I know I will stand up for myself forever.”

Uma talks about her experience in handling unethical practices at the workplace and offers tips on how not to get duped by unscrupulous companies: “Be bold to fight for your rights. In most cases, such fraudulent companies are insecure themselves and a well-thought out reply with facts and proofs will usually do them in.”

Congrats Saru, Rituparna and Uma! You win a Women’s Web mug each!

Wait! It’s not over yet!

Since we felt that everyone should read all the other lovely entries that came in too, we decided to collate all of them here. We recommend that you read every story – and live inspired!

I Stood Up: Women against street sexual harassment

Rashi writes about how she dealt with harassment at a railway station: “I am really glad that I did what I did. I was told I am an inspiration to all the women out there.”

Falak writes about how she handled a pervert on a bus journey in Delhi: “I was not scared at all. I was sure even if no one came to my rescue I’d handle that a**h**e single handed.”

Here is Nia on how she confronted her harasser who had the audacity to click her picture without her permission. What’s more she informed his wife about the dirty activities of the man too! “That man apologized to me and the rest of the part was played by his wife who shouted at him like hell in the station in front of the whole mob.”

Bhavia talks about her instinctive reaction to street sexual harassment and the aftermath of it: “I still don’t know from where I got the strength. My blood was flushing with anger.”

I Stood Up: Women against injustice

Rachna writes about how she refused to take the easy way out by bowing down to corruption and instead refused to pay a bribe to a crooked government official: “They ask for a bribe, because we give them. It is time we started taking some responsibility for the corruption we see around us.”

Prabhavathi discusses an episode where she stood up against child labour inspite of her friend’s initial advice to look the other way: “When we all want our children to play with the best toys and get the best education, how can one hire a child for work?”

R’s Mom post reiterates the fact that we women will invariably need to take a stand at some point in our lives: “Whether it’s for ourselves, or it’s for our family or it’s for any person on the street, what is important is realising that ‘we have to stand up.’ We need to speak out for sure.”

I Stood Up: Women against gender violence

Bhawna laments about a girl child’s rape and questions why no one took a stand to help the victims: “A five year old was raped, of her childhood, her innocence and her free spirit…I was ten and my mind was fickle. But why did the world around me behave like 10 years old?” She also exhorts us to stop falling into the “good Indian girl” trap!

Rinzu Rajan writes about how she stood up for her friend who was suffering in an abusive marriage and helped her to move on: “This fight was an important learning lesson for me both as a friend and a woman.”

I Stood Up: Women against inequality

Usha writes about how she fought for her rights, respect and an equal footing in her marital home: “I am not a puppet that you tire of and discard, just because you realized that the puppet was actually ‘real’, with a mind and feelings of its own.”

Nithvin writes about how she handled verbal abuse at her workplace: “In a Corporate set up, the words he had used at me were just not ok as far I was concerned.”

Ashreya Mom writes about how she got her family members to stop following rather archaic traditions that surround a girl’s menstruation: “Now my mom explains thinks biologically and scientifically when she talks about puberty.” She also writes about several other instances when she was unafraid to stand up!

Sutanuka writes about refusing to accept patriarchy as the default norm in her life: “My battle will go on to stand up and be firm on the principles which I care for.”

Ekta writes about how she stood up against unfair favouritism and office politics: “They won the appraisal argument that year with all the crap they gave me but lost the loyal, trusting employee in me.”

I Stood Up: Women against wrongful authority

Gkorula writes about how she stood up and protested against a popular news organization for wrongful reporting of facts and goes on to quote Alan Moore from V for Vendetta: “Knowledge, like air, is vital to life. Like air, no one should be denied it.”

Sejal writes about how she decided to defy convention and opted for a simple wedding celebration – as opposed to the great India wedding gala: “Marriages should be thought of as a coming together of two souls. Today, we emphasize more on the coming together of caterers, bands/DJs, decorators, jewellers and dress designers. Is it the right way forward for the society?”

Shail writes about the trials and tribulations behind bringing up her boys the way she wanted to: “I stood up, became a tigress, for my children’s sake, fighting off anyone who wanted to see them just one more in a herd of sheep.”

Thanks everyone for participating in this blogathon! We had a fantastic time reading through all the entries and we hope you do too!