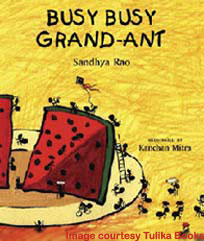 Creative stories, eye-catching illustrations and a regard for the local environment are all synonymous with Tulika Books. We caught up with Sandhya Rao on Tulika’s journey and progressive children’s literature in India.

Anne John (AJ): Looking back today, how well would you say that Tulika has progressed with respect to your initial goals and ideas? How far have you achieved what you set out to do at the beginning?

Sandhya Rao (SR): I think we have been walking fairly steadily on the path we envisioned and that was: to reach books in as many languages as possible to as many children as possible. Except that it has taken time… We were naive enough to believe that all we had to do was produce great books, and they would fly off the shelves! Well, now we know it doesn’t work like that. All those wheels within wheels, especially the one called ‘distribution network’.

From all accounts, I’d say Tulika has become a trendsetter in children’s publishing in India, for the ‘complete’ book, where form and content come together. Having said that, I think we learn from every single experience, every single book, and there’s always something new coming at us, something that shapes and changes us.

AJ: On the economics of book-selling in the Indian children’s book market; Indian parents are usually notorious for favouring “general knowledge” sort of books over fiction. Could you share your experience in this area?

SR: When we started out we were not entirely aware of the extent of this mindset. Now we are fully conscious of it. Especially since, for about six years, we ran a children’s bookstore and activity centre called Goodbooks (apart from doing our publishing).

While parents still want ‘useful’ meaning ‘information’ books, younger parents are now slowly opening up to the idea that children must also read other stuff, stories, imaginative stuff. Also, it is important that we create relevant and stimulating information books as well. Most often, these general knowledge books are from the West.

AJ: The reactions of some schools when you introduced the concept of bi-lingual books are described here. But what has been the response of parents and children to your bilingual books?

SR: Getting children/parents interested in their own languages is a huge challenge. While schools have begun to understand the value of bilingual books, I’m afraid parents really haven’t. The exceptions are parents bringing up children outside India. Among them, there is growing interest. But I cannot, in all honesty, say that children from English medium schools are getting interested in reading in their own languages or in Indian languages. That’s a HUGE challenge. But among those who already read in Indian languages, there is great excitement because there are more and more interesting books available for them now.

AJ: Interesting! Could you give us a brief idea about what Tulika looks for in potential stories?

SR: It could be different things. It could be an idea, a well developed plot, something with terrific visual potential. But it cannot be something that promotes stereotypes of any kind. We do look for details, because generalizations don’t work for us.

Anybody is welcome to send it their manuscripts. Some of the best books have come to us from the blue. And we do go to our tried and tested if there are specific projects we have in mind.

AJ: I notice that there are more female than male writers in your team. Do you think that women are emotionally better positioned than men to write children’s stories? Do you notice a difference in their respective approach or style?

SR: It’s true, somehow more women than men seem to ‘do’ children’s books, and I suspect this is true all over the world. I don’t think this is because women are emotionally better positioned for this, maybe it’s because they seem to have more patience for it? I don’t know.

We are pleased when a man writes for us, because we want women and men to engage with children’s books. I don’t think there’s a difference between men and women writing, but each one, man or woman, has his or her own perspective, approach, and so on.

We are pleased when a man writes for us, because we want women and men to engage with children’s books.

AJ: What has been the most rewarding aspect of being a publisher of children’s literature in India?

SR: Knowing that a small child somewhere far away, perhaps in a little village, has the opportunity to read and enjoy a book that has been created with love and care for her/his reading pleasure. And knowing that continuously reading books will eventually lead to empowering that child. Knowing that often, the children struggle against great odds, and derive sustenance and grace through these books. It’s a humbling and uplifting thought.

AJ: Have you any plans of translating stories published by Tulika into other media? For example, like cartoons or short films or even story-telling over the radio?

SR: We wouldn’t attempt it ourselves; it would be spreading ourselves thin. Besides, people with the right kind of expertise and experience need to do this. But we are always aware that there are some books that would lend themselves to becoming great films or animation serials. And if someone wants to do this, we are happy. There is some interest in some books, but nothing concrete has as yet materialized.

AJ: Lastly, what do you find more fulfilling and fun – being an Editor or a Writer?

SR: I enjoy being an editor. I love working with writers, illustrators and translators, helping them through the process to whatever extent necessary or possible. I am very much a production person, so the process of creating a book excites me.

But I also enjoy writing… it drives me nuts, and is often painful. Not just the process of writing, but the rejection that often comes at the end of it. Still, it’s a cathartic process. It’s personal of course, but if at the end I am able to share some of the experience of writing with readers, it’s like bonding!

Thank you Sandhya, and we hope Tulika books reach, delight and empower many more children in the years to come!