The Rani Of Jhansi By Prince Michael Of Greece And Denmark

A book by royalty about royalty; The Rani of Jhansi by Prince Michael of Greece interweaves fact and fiction, and portrays the queen we have put on a pedestal as a flesh-and-blood woman. 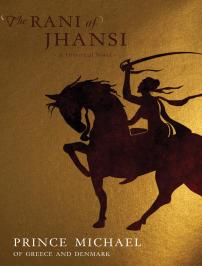 The Rani of Jhansi by Prince Michael of Greece and Denmark interweaves fact and fiction, and portrays the queen we have put on a pedestal as a flesh-and-blood woman.

Throw them all together in a blender and what you get is ‘The Rani of Jhansi’ by Prince Michael of Greece.

The book starts at the adoption ceremony of Damodar, the son that Rani Lakshmi and Raja Gangadhar Rao adopt to secure an heir for Jhansi. It takes the reader through the Raja’s death, the Rani’s dethroning by the British, the massacre of the British by Indian rebels at Jhansi, Jhansi’s brief return to peace and order under Rani Lakshmi, the subsequent attack by British forces and ousting of the Rani and her troops from Jhansi, and the final rebellion led by Lakshmibai at Gwalior.

Unlike most books that concentrate on the warrior hero persona of Rani Lakshmibai, The Rani of Jhansi is woven around her womanhood. Her sense of euphoria at being liberated from purdah when her husband dies, her refusal to accept the rules of widowhood, her infatuation with a “Feringhi”, her falling in love with a Pathan, a brief affair with another rebel leader, her love for her subjects, not unlike a mother-child bonding, her relation with her adopted son; the book explores different facets of the woman hidden behind the brave warrior.

Written in a simple, story-book like language, the book starts off on a dull note. If you manage to get past the first twenty pages without putting it down, you will be unable to let go of it. The tempo builds up as the book proceeds. For a history enthusiast, the book might be a bit of a disappointment, since it is a highly romanticized version of actual facts. For a layperson, it is an engaging piece of fiction.

Even though the book is historical fiction, you start believing that the Rani of Jhansi, about whom endless songs have been sung and poems written, was actually no different from other women; a woman who loved her hair massages, jewellery and afternoon siestas, as much as she loved horses; an ordinary woman, who rose to heroic deeds, albeit reluctantly, since situation demanded it. It is a pointer to the Durga that exists inside every female; it just takes circumstances to bring her into the open.

If you’re planning to purchase The Rani of Jhansi by Prince Michael of Greece and Denmark do consider buying it through this Women’s Web affiliate link at Flipkart. We get a small share of the proceeds – every little bit will help us continue bringing you the content you like!