The Palace Of Illusions, By Chitra Divakaruni Banerjee

Chitra Divakaruni Banerjee’s The Palace of Illusions re-tells the Mahabharata from Draupadi’s perspective, one suppressed in the original. 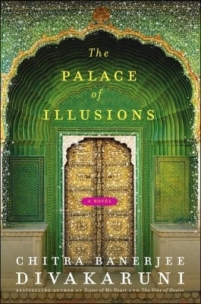 Chitra Divakaruni Banerjee’s The Palace of Illusions re-tells the Mahabharata from Draupadi’s perspective, one suppressed in the original.

Growing up in India, it is inevitable that I read the Mahabharata. It was part of middle school coursework. However, if you asked me today, a couple of decades later, what I remembered of the epic story, I would have to say that my knowledge was superficial at best – limited to the names of key characters and events. So, reading The Palace Of Illusions and revisiting the Mahabharata was indeed a wonderful and refreshing experience.

In the book, the tale is told entirely from Paanchali’s (better known as Draupadi) perspective. This, dubbed ‘Panchaali’s Mahabharat’ on the cover, is a critical shift and impacts the retelling kaleidoscopically. Even though Draupadi is at the core of the story, her individual role in the original is almost incidental. In this version, she is the key protagonist, and it is her voice that takes us through her birth from fire, her Swayamvar, her marriage to the Pandavas, her humiliation in the Kaurava court, her years of exile, the actual war and finally the ascent into Mount Meru towards Swarga.

Her relationship with Kunti is interesting because you now see her as Draupadi’s mother-in-law and not primarily as the mother of the Pandavas; so is her equation with Bheeshma, the Granduncle of the Kauravas and Pandavas. The most arresting of course is her relationship with the two men she loved most but could never quite fathom – Karna and Krishna. Both sub-plots run through the book, keeping you hooked. As a woman reader, you can relate to so many aspects of this telling, that you will find yourself nodding in agreement at several places, especially when she describes the nature of her relationships with her five husbands (with whom she is obliged to spend one year each in rotation).

Her evolution as a woman too is a familiar story to most of us – she is quite a firebrand as a young girl, fighting for her right to study along with her brother and wanting to learn all the secrets of statesmanship. As a young woman, and then as a wife, she starts to learn the art of picking her battles, not hesitating to use an odd bit of manipulation to keep husbands, mother-in-law, kings and competing wives in check. As she begins to age, her love and loyalty to her clan grows concrete and unshakable; while her introspection on the suffering caused by people in the name of honour is something each one of us hardened by the travails of daily life is familiar with. Her unassailable belief in herself and her power as a woman – even though shaken many times in the story – are re-enforcing for each one of us today.

Almost everything in the book, as in the original itself, is a metaphor. It is up to the reader to make the most of them, and interpret them in ways that fit in to their framework. I found this an enjoyable exercise, a multi-dimensional read that could be digested at different levels in different moods. There is a bit of a Mills & Boons touch to the novel’s reinterpretation of Draupadi’s relationship with Karna – but nevertheless, I have to admit – it was thoroughly satisfying to the romantic side of me, which wanted them to be together from the moment I realized there was never any hope for them.

If you’re planning to purchase The Palace of Illusions, do consider buying it through this Women’s Web affiliate link at Flipkart. We get a small share of the proceeds – and every little bit will help us continue bringing you the content you like!

Readers outside India can purchase The Palace of Illusions through our affiliate link at Amazon.