Teaching Kids How To Handle Failure

Learning not to be a lousy loser is essential in these competitive times. 5 parenting tips for teaching kids to handle failure gracefully. 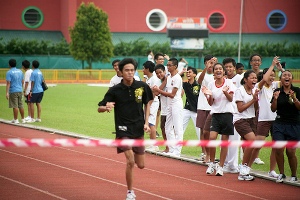 Learning not to be a lousy loser is essential in these competitive times. 5 parenting tips for teaching kids to handle failure gracefully.

Failure is inevitable and we all know it. It is impossible for everyone to be the best at everything. Yet, we are faced with a generation of kids who can’t handle losing. At party games, races, and even at friendly neighbourhood contests, we see children bursting into tears because they “did not come first”.

There are bound to be setbacks in life. How can we prepare our kids to handle failure well?

How to handle failure tip 1

Appreciate the effort, not the outcome: Stress the importance of working hard. It does not matter how beautiful the painting is, or how many points were scored. Emphasise that as long as they enjoy the process, learn something and do their best, the end result is immaterial.

When my 5 year-old asks me if his “drawing is awesome”, I ask if he liked doing it. If he did, that’s good. He may persist and insist, but I stand my ground. Be consistent and it will eventually pay off – after a clay modelling session for Ganesh Chathurthi, my son softly told me that others’ Ganeshas were better, but it was alright because he had fun.

How to handle failure tip 2

The relevance of games: Encourage kids to play games – at home and with friends, games of skill and chance, physical and mind games. This may happen in the course of things when there are siblings. With a single child, conscious effort may need to be taken. In single-child homes, parents may have to take on the role of siblings, not giving in. Let them see that you play to win, but lose gracefully too.

Make it a point to include solo activities (Brainvita, self-correcting puzzles, Tangram), individual games (like Snakes and Ladders, Uno, Ludo, Monopoly, Scrabble, Chess, Table Tennis, Tag) and sports involving teams. Group activities where there are no winners or losers – like pitching a tent – can be eye-openers. Everyone contributes and the end result is a function of group effort.

How to handle failure tip 3

Handle your own expectations and reactions: How you handle performance – whether it is homework, tests, report cards, contests, or games – sends out a strong message. Watch yourself, be mindful.

I discovered that even babies can be perceptive and read subtle signals. As a six month old baby, my son would crouch behind the couch to practise on his toy piano if I was around. When it was just my husband, he had no problems pottering about on the piano out in the open. I was an extremely competitive person myself; I had high expectations of him. Even as an infant, he’d sensed it and felt pressurised.

By the time he was two, I knew I had to do something about it. He was crumpling up sheets of paper when he wasn’t satisfied with his drawings – something he did only in my presence. I worked on myself consciously and became a relaxed parent. My son’s temperament and a shift in my personal beliefs helped change my attitude.

… I find it unnatural to cushion and shield kids from the real world. It would be counterproductive to declare everyone a winner, and totally insulate them from failure.

At the same time, I find it unnatural to cushion and shield kids from the real world. It would be counterproductive to declare everyone a winner, and totally insulate them from failure. I quite like what my son’s school does on sports day – only the kids in the first three positions get medals, but everyone gets a chocolate. No one’s upset, and the winners have been recognised too.

By all means, gently point out mistakes. Highlight incidents when you have goofed up, preferably by giving examples they are aware of, like when the milk boiled over, or when you spilt water. Talk about instances where you had to deal with disappointment, but did not give up hope.

At music concerts or dance performances, we discuss the years of training and discipline involved. And of course, one can use books and stories.

How to handle failure tip 4

Pick competence over competition: Competing with others can be limiting. It may also be a case of judging a fish by its ability to climb trees. By competing with themselves, and continuously improving, kids can fulfil their true potential. Such children turn out to be self-motivated, and don’t give up in the face of adversity. These are valuable qualities to possess as adults.

Some schools don’t have formal tests and some have a highly competitive exam-centric environment. Make an informed decision so that you don’t end up pulling your child in opposite directions at home and at school. Admitting your child in a school that does not conduct exams doesn’t imply that you are lax or lazy, or that your child will be left behind. Like anything else, it is a matter of personal choice and beliefs, and one has to work hard to see it through.

How to handle failure tip  5

Every child is different: Some perform well under pressure, some buckle under stress. You know your child; you can do what is right for your child. Have courage to go against the tide if you believe it is best for your child. There will be times you will feel the peer pressure as a parent, but if you hold out, you will be glad you didn’t.

What you do when you fail, determines your chances of success. Are you going to give up and hang up your boots, never to attempt anything tough and challenging again? Or work hard to get better and keep trying?

Jason Mraz summed it up well, “You’re not obligated to win. You’re obligated to keep trying. To do the best you can do every day.”

Do you have any tips for teaching kids to deal with failure? Do share!