Who is a winner? How do you explain to a child that sometimes, hard work doesn't necessarily lead to winning? 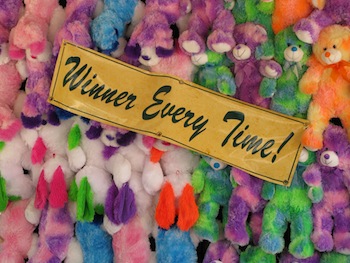 We had been following the celebrity dance show “Jhalak Dikh La Ja” this season. Our 6 year old daughter is allowed to watch some of the programs on Television with us, provided they meet our parental guidance standard. This dance show was obviously very much of a suitable watch and she would eagerly await next week, every week! Towards the end of the show, she had even started speculating and predicting on who the winner would be.

“I know who will win,” she said after the last vote appeal was made by the contestants. “It’s going to be Raashmi-Desai-Sandhu because she performed the best and earned the highest marks from the judges.” Earlier, I had taken great pains to explain to her how the marks awarded by judges were directly related to the performance and the contestant who performed well moved forward in the show with the support of the audience and the best one ultimately won. After Gurmeet Choudhary won, my daughter was bitterly disappointed. It was as if her whole foundation of belief had shaken up. “How could this happen?” she asked. “Raashmi scored the most, she performed the best, and judges gave her the highest marks!” So then I said it was also on the number of votes a celebrity receives. So her next question was “then why wouldn’t people want to vote for the best?” And wouldn’t Raashmi cry and feel angry that although she was the best, she lost? “ “I guess she would” was all I had to say to that question.  But it did get me thinking. How does one explain to a child that doing your best may not guarantee the desired results, not always.

If she was an adult I would have told her the best person does not always win and your hard work is not always paid off and one should take failure in stride and move on in life. Success is never ending and failure is never final, as the popular book title goes.    Defeat in a competition should not make us bitter, if anything it should make us thankful for that kind of an opportunity and help us and work on our limitations. Sure, there is bound to be disappointment but you cannot let it bog you down. Life isn’t always fair.  You may lose even if you deserved to win and did everything you could to succeed. Luck plays an important role in our achievements but working hard makes your case stronger and raises your chances. There is something to be learnt from every failure and if you are not a good loser, you probably won’t make a humble winner either.

But since my daughter is  just 6 years old, I found it difficult to explain myself on the contradictory stand taken. On one hand I told her you must work hard and perform better than others to win and at the conclusion of the show I declared that people may choose to vote for their favorite celebrity, irrespective of their performance rating!

We had quite a bit of a discussion that night and I am still looking for the perfect answer to her question. Something conveying that being the best does not guarantee a win and at the same time coming second is not always an indication of your talents. Words of wisdom that would retain her optimistic attitude and yet prepare her for rejection in life. Yeah, it is kind of complicated.