An Indian woman wonders why we Indians don't consider it necessary to spend quality time with our respective spouses. 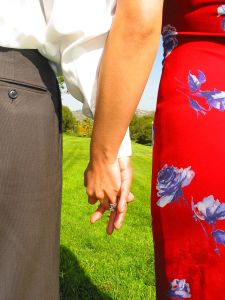 “You must be kidding!” she said, partly surprised and partly in disbelief.

The matter wasn’t that of life and death but looking at her expressions one would have concluded something very abnormal had just been mentioned.  And I wish I could eat back my words, then. My non-Indian friend caught on my embarrassment (well I wasn’t ashamed of admitting it but her reaction kind of made me feel pathetic!) and quickly joked “tell your husband he cannot cave in like this”.

I was chatting with my neighbor at the community park and the conversation took an exciting turn when she declared about the couple’s weekend trip to a nearby Resort without the kids. Blushing over the ‘Oohs’ and ‘Aahs’ from the females present that time, she said she couldn’t wait to go (obviously, I mean we all love our children to death but who wouldn’t want to go on a trip without them once in a while; many of us don’t GET to go, is a different story!).

“I don’t remember the last time I went out without the kids even for a dinner date with my husband” I blurted out. And that is what earned me the first line of this editorial.

There are a number of excuses I could have given for denying myself this pleasure and in my mind I replayed them all, one by one .1) The Indian culture is different from the western side of the world. 2) We believe in putting our kids before everybody and everything else. 3) My kids are too young; they cannot survive even for a couple of hours without me 4) I cannot trust my children with anybody else. 5) I don’t need a date with my own husband. 6) I live in a nuclear family, it’s just us in the house, where is the need for privacy? 7) Our routine here (in the U.S) is neither hectic nor overly busy; I don’t really need a break. 8) Hiring a baby-sitter is an unnecessary expense because I am a stay-at-home Mom.

I could go on and on, but in the end I would just be kidding myself and nobody else.

To start with, I should toss aside the cultural disadvantage out of the window. We have this habit of using the Indian culture as an armor whenever it suits us. The truth,  in my case (and I suspect in a million households in India too) is our life style is pretty much blended. Our wardrobes have a lot of traditional clothes but they are saved for special occasions, the routine attire is pretty much westernized. The kind of food found on our dining table depends on the day of the week. We alternate between a full Indian meal to pizza and pasta to sandwiches and soups and Chinese takeout, almost regularly. And as far as putting the kids first, I guess it is a universal phenomenon, but assuming that a couple of hours away are detrimental to them in anyways, is probably local to us.

Next, comes the question of my kids being too young and the resultant trust issues. They are young, but are not infants and they are definitely independent enough to fend for themselves for a short period of time under reliable adult supervision.

The parts hereon are all mixed up other than seeking a babysitter. True, it is just the four of us at home; there are no in-laws to escape. My husband works the normal 9 hours a day and is back home at a decent time. And the ‘I don’t need a date with my own husband’ is a line older than my grandma! Most of the urbanites even in India have shaken it off long ago.

Some would easily say that ‘dating’ itself is not an Indian concept but I would say, so wasn’t’ ‘freezing food’ but the latter has been adopted and prevails and so does the ‘date’ under various pretexts and different names.

In my humble opinion, everybody needs a date with their husband! For a marriage to be alive the fire of romance has to be burning and for that to happen, time alone with each other is a must.

Coming to the issue of hiring a baby-sitter, it has been raised frequently in conversations at home without any success.  I don’t work outside of home, so you could say I am responsible for the care of my children full-time. Spending money on a job that I do day in and day out (free of cost!) seems improvident to us, in plain sight. But, only in plain sight.

To me, people like us need a trusted babysitter more than anybody else. People who live far away from their family, Couples who do not have the luxury of having grandparents around to babysit and give them that occasional break. Parents, who raise their children without an immediate (closely related) support system.

An alternative would be to leave the kids at a friend’s place and go out on a date, but I would rather save such favors for emergencies.

Now, the most relevant question here is, if I know that I deserve one and that help is just a phone call away (either in the form of a friend or a babysitter) what (or rather who) is stopping me from going on a date with my better half?

It is the “Dad” himself!

Long long ago, we did make plans to go out for dinner by ourselves. Our daughter sulked for hours before and just when we are about to leave, she planted herself in his lap, sad and teary eyed. She hugged him tight and in her sweetest voice implored “Don’t leave me Daddy, I miss you”.

Now that there are two of them, I fear double the resistance and a stronger tug at the ‘Dad’s’ heart. Maybe it is time to enforce some wifely authority or maybe not! What do you say? Have you been on a date lately?