Andal: The Autobiography of a Goddess is a wonderful introduction to the Bhakti saint-poet and a soul-stirring translation of her works from medieval Tamil.

While many Tamilians would have heard of Andal, and some may even have heard her poetry being recited in the month of Markazhi, most would not be able to understand it. So this translation of her works – Thiruppavai and Nachiyar Thirumozhi – from eighth-century Tamil, is of value to Tamilians and non-Tamilians alike, to those who are familiar with her story as well as those who aren’t. A Bhakti saint like Akka Mahadevi or Meera, Andal loved Krishna as a child; as a teenager she refused to be betrothed to any mortal man.

So who is Andal?

Andal was the only woman among the twelve Alwars – medieval Vaishnavite poets who took the scriptures to the masses, composing hymns in Tamil that are considered the equivalent of the Sanskrit Vedas. Along with Shridevi (Lakshmi), Andal appears beside Vishnu as his consort, Bhoodevi – the personification of earth.

I find the similarities between Sita’s origin and Andal’s interesting – the latter was found as an infant under a tulsi plants by her father, Periyalwar (also one of the twelve Alwars), in his field in Srivilliputhur, and known as Kodai. Andal, though, had to undergo no agnipariksha; she is said to have merged into the godhead at the Sri Ranganatha temple in Srirangam.

A personal connect with Andal

I was born in Srirangam, and as a schoolgirl, spent summer vacations there with my grandparents; I’ve always wondered why Andal is revered as much as she is, why women see her as one of their own. So it was with a degree of anticipation that I set off on this journey to discover the young Kodai; I was not disappointed.

The colours on the jacket brought back memories of my ancestral home with its red-oxide floors, the kolam design on each page transported me to the streets of Srirangam. Mani Rao’s preface sets the tone beautifully, giving a glimpse of what one can expect from the book, the differences in the two translators’ styles … ensuring the reader is eager, and ready, to receive Andal. While the introduction and translators’ notes are necessary for context, I grew a bit impatient after fifty pages; I couldn’t wait to dive into the Thiruppavai. (Possibly not a complaint for those encountering Andal’s story for the first time.)

The authorship of Andal’s hymns

The question regarding the authorship of the Thiruppavai (thirty pasurams – paragraphs of poetry set to music – attributed to the young Andal) and the much longer Nachiyar Thirumozhi (fourteen hymns said to have been composed in her teens) is important, and the book does justice to it.

The translators bring to the reader the theories that abound – that Andal did not exist and was a figment of her father’s imagination, that the creator of these compositions was Periyalwar himself. Even the suggestion makes me indignant, so I was relieved that the translators did not subscribe to the theory that Andal was merely a construct. But, as the book says, the question remains; it is upto us to draw our own conclusions. What has been omitted, and would have been of value to a reader in this process, is the background of the other eleven Alwars. For can Andal be seen in isolation?

True equality in the Alwars

But what the book fails to mention, I can!

It is widely accepted that the Alwars were chosen to bring people of all kinds, across castes and classes, into the fold, to include marginalised communities. To demonstrate that anyone with devotion would be accepted. And Andal was the lone woman.

Like Andal, Tirumazhisai Alwar too was a foundling. Born to a sage as a lifeless lump of flesh with no arms or legs, he was raised by a tribal couple. The Mudhal (first three) Alwars, Poigai, Bhutha and Pey are said to have been born miraculously. So why single out Andal? Why doubt her existence and authorship alone?

It is widely accepted that the Alwars were chosen to bring people of all kinds, across castes and classes, into the fold, to include marginalised communities. To demonstrate that anyone with devotion would be accepted. And Andal was the lone woman.

The reasoning that a young girl could not have mastered the poetic form, or possessed knowledge of the gods to be able to compose the hymns credited to her, is flimsy. Kodai lived close to the temple in Srivilliputhur, grew up in the household of Periyalwar, and her abilities as a poet have been recognised by Periyalwar himself in one of his verses.

Andal the saint-poet and her love for the Lord

Then comes the much-awaited Thiruppavai. Having two translators interpret it works really well, giving the reader a better sense of what the original may be like. Neither translates literally, or approaches it as a philosophical text, choosing instead to focus on the aesthetics. And yet they have distinct styles.

Priya’s poetry instantly appeals. She conveys Andal’s sense of urgency, skilfully capturing the voice of a petulant young girl with her use of imperatives. Spirited, energetic, Kodai mocks the lazy ones who slumber on when they should be joining in the hymns and seeking His grace.

“As Kumbhakarna slid down death’s throat did he slip you his gift of demonic slumber?”
“You promised to herald our lotus-eyed Lord. Are you worse than a parrot that mimics our vows?”

More mellow, but equally delightful, is Ravi’s style with his use of imagery:
“Dawn the colour of bruised mango”

His poetry just flows. The Thiruppavai was definitely worth the wait! 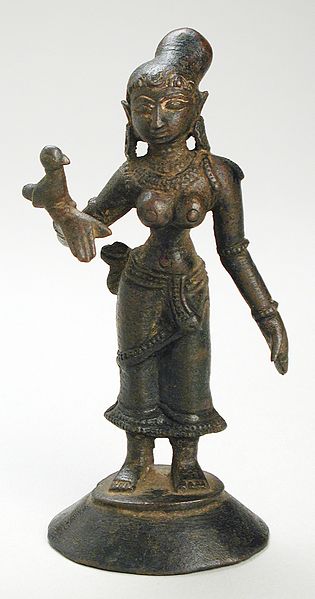 Unlike the (shorter) Thiruppavai where we get to experience Andal through both Priya and Ravi, not all fourteen hymns of the Nachiyar Thirumozhi are translated by both. The decision has been made wisely, and where both translations are featured, the sequencing is thoughtful. Here we encounter a more mature Andal.

“My surging breasts long to leap to the touch of his hand which holds aloft the flaming discus and the conch.”
She entreats Manmatha (Kamadeva) in the first hymn:

“Coax the world-measurer to caress my waist, to encircle the twin globes of my breasts”

In the second, she pleads with Krishna not to destroy the sandcastles they have built, a symbolic reference to hearts being broken and hopes being shattered.

The third, where Krishna steals the clothes of the gopi girls, is rich in metaphor too –
“Lord strip us of our shame, succour us – else return us to our drape of worldly life”
“Unclothed by devotion we’re unfit for the world.”
“Climb no higher on the wild lime with our fine inner clothes, our tender feelings. Return all.”

In the fourth song, she is engaged in a game of circumscribing a circle on the ground with her eyes closed – she longs for the circle to connect and complete, sign of her imminent union with Krishna. The poem is replete with references to Krishna’s conquests – from Kaliya to Mahabali.

In the fifth, a lovesick Kodai yearns for union with her lord, and pleads with a kuyil bird to carry her messages to Him.

The sixth is the well-known wedding hymn, Varanam aayiram. Andal visualises herself being wed to Narayana, she describes her dream – as also the wedding rituals that are followed to this day. The song itself is now part of the Tamil Vaishnava wedding ceremony.

In the seventh song, she speaks to Vishnu’s conch in a voice dripping with scorn:
“you possess his lips that should possess mine. Great is your glory!”
And addresses the conch as “Lip-leech”.

In the eighth, requesting the monsoon clouds to be her messengers, Andal gets even more desperate and explicit. The translators make beautiful use of imagery in this hymn, seeing Andal’s breasts as ‘full hills’ or ‘upturned blossoms’, and referring to her ‘body’s simmering valleys’. Andal is earth, after all! (As Vishnu’s consort, Bhoodevi, our earth, was to be treated with respect – relevant in these times of wanton forest fires and illegal mining.)

With each song, there is a perceptible change not just in her age, but also her state of mind. Priya and Ravi succeed in capturing Andal’s love and longing, her various moods ranging from playful to passionate and pining. 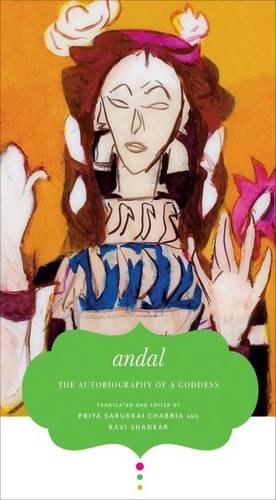 Andal rages and rants against the creatures of the grove. She becomes morose that the monsoon has come and gone and yet her lord hasn’t appeared.

Along with her anguish, we sense her increasing frustration against her beloved.
‘Those who love me,
I shall love in return’.
If this is a lie
What is left
To believe?”

The tone then changes to one of fury:
“I shall pluck out my useless breasts by the roots and fling them at his chest”

But Andal remains devoted even when wrathful.
“If he won’t enfold me in his radiant chest then at least let him look me in the face, utter the truth and give me leave to leave. My love-swollen breasts cry for his grasp. My only wish is to serve in all the ways that please.”

Then, in the fourteenth and final song, Andal suddenly turns composed, wise, steeped in devotion, devoid of desire; there is a feeling of calm, of understanding, surrender.

Periyalwar’s ode to his daughter turned goddess takes you through the entire spectrum of emotions, makes you experience Andal’s love and devotion, a fitting end to a wonderful book.

I wish many relish Andal’s poetry, that there are several reprints, and I hope the typographical errors are rectified in subsequent editions.

A deeply satisfying read that, as Priya has said in her acknowledgement “remade me as a bhakta”. I got the answers to my questions too: Why is it that these songs are considered accessible unlike the scriptures? What is the essence of the Vedas that the Alwars convey with their hymns? In one word: Surrender.

I understood why Andal resonated with the women I saw in my childhood in Srirangam.

If you’d like to pick up Andal: The Autobiography of a Goddess by Priya Sarukkai Chabria and Ravi Shankar, use our affiliate links: at Flipkart, at Amazon India or at Amazon US

Arundhati Venkatesh is a children's writer. Her books have won several awards, including the

33 Books By Indian Women Authors Translated For Your Reading Pleasure!