Remembering a girl who knew the value of education 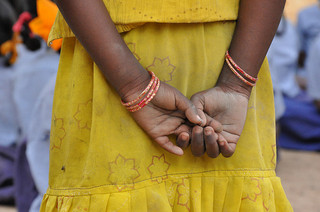 Every GirlsROCK post I’ve read so far has reminded me of that girl from long ago.

It was my first year of college. We – a bunch of college kids and a professor – camped at a village for ten days. In those ten days, we learnt what no professor or college could have taught us. We learnt a little about life.

Our day began early. The girls had to wake up before daybreak to bathe. The boys could take a dip in the village pond even after sunrise. There was vegetable chopping and road laying to be done in the mornings. Afternoons were for adult literacy. We put up street plays, engaged with the village folk, did a lot of different things. In the evenings, we helped kids with schoolwork. It was the evenings that I found distressing.

There was this girl in her pre-teens, the village headman’s daughter. Her father had money and power. He ran an arrack business and controlled the area. This girl was privileged, relatively. Still, this young girl’s life was so different from ours.

The “school” in the village (a single room where kids of all ages sat together) was only for under-12s. So she had
joined the English medium school in the neighbouring town forty kilometres away. After years of reciting the same three nursery rhymes, suddenly, she had to study Tennyson and Keats.

As I sat with her under a hurricane lamp every evening, huge mosquitoes feasting on our blood, I realized what a difference there was between us …

–       who found it inconvenient if we had power-cuts before a test, and this girl whose entire village had a couple of bulbs.

–       who thought life was tough because we had to queue up for the common bathrooms in hostel, and this girl who had never seen the inside of a bathroom.

–       who bunked classes, and this girl who travelled forty kilometres every day to get to school. –       who took so much for granted, and this girl whose reality seemed straight out of a film. She had been allowed to go to the big school only so her father could claim the money under the Jayalalithaa government’s scheme for girls’ education – a family whose daughter studied up to the eighth standard (or was it the tenth? My memory is hazy) was eligible for an amount of ten thousand rupees. This girl knew she would be pulled out of school the day she began menstruating – it wasn’t safe for ‘girls who had come of age’ to travel alone. The family’s honour was at stake.

–       who whined about everything – mess food, profs, tests – and this girl who never ever complained. All she said was “I want to study.”

–       who thought college was about being cool, and this girl who valued education.

I felt angry, sad, proud, inspired… but most of all I felt ashamed.

Today’s changemaker that we’d like to highlight is Kranti. Kranti (Revolution) educates and empowers trafficked girls, the daughters of sex workers, and otherwise socially marginalized girls (Revolutionaries) to become agents of social change within their communities. By providing them with a healing home, formal and extracurricular education, leadership and job training, as well as the skills and confidence to solve social problems, Kranti enables the Revolutionaries to emerge as leaders and economic assets, redefining the value of women in Indian society.

As Beautiful As Her Work