Devdutt Pattanaik’s Sita: An Illustrated Retelling of the Ramayana

In 'Sita', Devdutt Pattanaik analyses the Ramayana, the motivations of the characters, and the workings of the human mind, making the reader empathise and introspect. 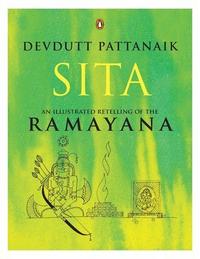 In ‘Sita’, Devdutt Pattanaik analyses the Ramayana, the motivations of the characters, and the workings of the human mind, making the reader empathise and introspect.

What was the Ramayana before politicians appropriated Ram, and western thought process discredited him? Devdutt Pattanaik takes us through the twists and turns of the timeless tale that has evolved over thousands of years, embellished by regional retellings. In a style much like in ‘Jaya’, he puts forward his interpretation, and that of talebearers before him – from Valmiki’s Ramayana, to Sanskrit plays, puranas, versions in various Indian languages, in Jain and Buddhist traditions, and in south-east Asia.

He reveals details that we seldom hear about, lesser-known backstories – of Kaikeyi as the brave queen who served as the king’s charioteer and saved his life; of Manthara, wet-nurse to Kaikeyi and a gandharvi in her previous life; of Sita as an inquisitive and intelligent young girl.  Over the course of the tale, the Sita who questions grows into the Sita who understands and accepts unquestioningly.

Devdutt Pattanaik’s Sita seeks to provoke thought, to inspire, to expand one’s mind and realise one’s potential. The author points out the fallacies of human nature – humans value things over thoughts, judge instead of understanding another’s point of view, live in fear not faith. What is implicit in the epic is made explicit.

The author juxtaposes culture (where society is bound by rules) with nature (where there are no boundaries). He compares Ram, king and upholder of rules, with Krishna, the kingmaker who bends rules. He brings to our attention symbols and metaphors, motifs and patterns. The writing is powerful, the turn of phrase crisp. The Ramayana is a tale of emotion – filial affection, loyalty, love, greed, lust and malice. Pattanaik’s evocative prose brings out these emotions in all their intensity. The reader is left feeling a deep sense of empathy with the characters.

In Devdutt Pattanaik’s ‘Sita’, Sita is not a victim. She has grown up listening to the sages discuss the Upanishads. She lifts Shiva’s mighty bow with ease, and kills Ravana’s twin in a fierce battle. She is wise and strong. A single mother to her sons, she is independent, not abandoned. It is Ram who is seen struggling to come to terms with what he must do as king. He remains devoted to Sita, and walks into the river Sarayu chanting her name.

Pattanaik clarifies the difference between jati and varna, illustrates the importance given to fidelity (of both men and women), talks about the consequences when a man forces himself on a woman, and observes the inclusion of eunuchs in the narrative.

– the statement that feminists favour the Goddess as the female version of God (as opposed to gendering being a representation of mind/thoughts and nature/things). All the feminists I know neither want women to be worshipped, nor ill-treated, just treated as humans.

– the inference that women being mutilated/killed in the Ramayana is “clearly an acceptance of male violence against women”. The Ramayana shows as many, if not more, men being killed, so why bring gender into it?

While I disagree with these views of the author, I urge you to overlook them, for the reward is great. Rediscover the Ramayana, and yourself.

If you’re planning to purchase Sita by Devdutt Pattanaik, do consider buying it through these Women’s Web affiliate links at Flipkart or Infibeam.