Akbar Agha‘s, The Fatwa Girl, while a youthful tale of love and dreams, also addresses the complicated issues of religion, tradition and beliefs. 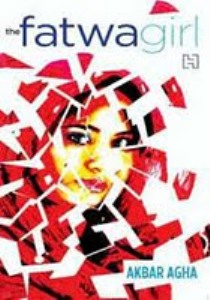 Pakistani author Akbar Agha’s The Fatwa Girl, a tale of youthful love, also addresses  the complex issues of religion and tradition in a conformist society.

The Fatwa Girl is a nickname, proudly bestowed upon the bold and beautiful Amina, after her spirited campaign against the menace of suicide bombers in Pakistan today. Smart and charming, she seems like the ideal girl-next-door; only with lofty ideals and idealistic visions for her country and religion. It is not surprising then, that her neighbour, young Omar falls for her – and thus begins a tender love story, not unlike the hundreds of love stories that bloom everyday in our own backyards.

By giving his heroine Amina a special passion for poetry, Akbar Agha is able to scatter several lovely snippets by renowned poets throughout the book.  One such verse by Omar Khayyam featured at the beginning, is enough to prepare us and set the mood for a bittersweet tale.

Ah Love! Could you and I with fate conspire,

To grasp this sorry scheme of things entire,

Would we not shatter it to bits and then,

Remould it closer to the heart’s desire.

As Amina and her friends try to bring change to their society, their energy and optimism is infectious, and you too are filled with hope. But somewhere, the cynic in you (or should I say realist?) also knows that their success is far too simplistic and easy to last long. As expected, Life intervenes with a mind of its own – and alters their naive plans.

When Amina gradually gets entangled in a web of illusions and deceptions, we are helpless spectators to the inner turmoil of a young woman pitched against her core beliefs. Having come across numerous cases of domestic abuse, one can clearly see how a young woman gradually ends up accepting the vile treatment meted out to her, inspite of being educated and socially well-off, because she is inherently conditioned to accept the set rules without question. We can empathize with Amina as her frustrations and disappointments mount, until eventually, a spark of defiance sets fire to her inwardly raging spirit, culminating in a dramatic climax.

There is also a parallel Devdas-style interlude involving Omar who finds himself enjoying the company of a dancing girl called Gulbadan. Although a little cinematic, it works as an entertaining distraction and gives us a clearer insight into Omar’s character. I was particularly thankful that instead of following the cliche and sinking into a drug-induced stupor, Omar takes it upon himself to do some good for Gulbadan and her young daughter.

The story is mostly narrated in the first person by Omar, but manages to deliver the perspectives of the various characters. The language is simple and easy to grasp, with the author maintaining a colloquial and flowing voice.

Akbar Agha weaves an interesting tale of youthful hopes and virtuous aspirations, whose protagonists are caught between their own wishes and the hypocritical, yet strict rules of a society worn at the edges. In the end all the dashed hopes and shattered dreams are summed up aptly in this poignant conversation,

She got up and sighed. “For all the sad words of tongue and pen…’

I broke in, “The saddest are these, ‘It might have been.’”

If you’re planning to purchase The Fatwa Girl by Akbar Agha, do consider buying it through this Women’s Web affiliate link at Flipkart. We get a small share of the proceeds – every little bit will help us continue bringing you the content you like!