Mirror, Mirror On The Wall

Last but not the least in January's writing theme, we have Sangeeta Mall's interesting account of how she resolved to keep fit. Did she keep it up? Find out! 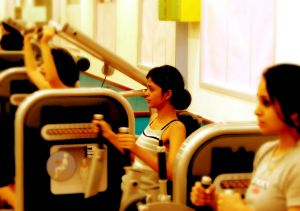 Last but not the least in January’s writing theme, we have Sangeeta Mall’s interesting account of how she resolved to keep fit. Did she keep it up? Let’s find out!

Sangeeta, in her own words: Sangeeta Mall is a novelist. Her first book, ‘Cloud 9 Minus One’, was published by HarperCollins in 2009. She expects to launch her second novel, another story on women’s issues, late in 2012.

The gym is open on 1 January. They make it a point to keep it open on the first day of the year, to enable all the members to start the new year with a healthy bout of exercise. There are notices all through the gym exhorting the slackers to ‘Get Ready For 2012’, to ‘Beat Laziness And Win Fitness’. There are many creative banners, and I feel the copywriter is a good one, though I’m not sure if he, or she, is fit and slim. But the pictures and words plastered all across the wall speak to me in my own language. They depict a fat person of indeterminate gender sitting and doing nothing. The copywriter doesn’t believe in hints. The message is very loud. Get off your backside and lose that adipose!

I don’t go to the gym on 1 January. I’m allowed to have one hangover per year. On 2 January, however, I faithfully report to work, which is how I look upon that endorphin-filled space humming with steroids and sweat. I huff and I puff and I almost bring the house down. Week after week, I too contribute my share of endorphins to the gym. I feel good as my muscles groan and curse. The more they curse, the better I feel. Three weeks of groaning and cursing and I’m ready to take the mother of all tests, a small step for me but a giant leap for my ego. I step onto the weighing scale. These days there are no wavering needles on the display, and there’s absolutely no scope for interpretation. The bright red digits on the screen of the machine speak unambiguously. All that huffing and puffing have made not a jot of difference. The banner pasted above the machine grins down at me mockingly. My New Year resolution to lose weight is already losing steam, or rather, sweat.

Clearly, laying off the sweets is the right formula. The copywriter is so wrong. It is not ‘abs’ but abstinence that’s going to remove the thick tyre around my waist. This is how I think of my body, in terms of tyres and deposits and layers. This is what I see when I see the mirror. Those layers above my elbows, those need to be jettisoned first, I tell myself. All the flesh on my frame is as extra ballast, to be dumped before I sink into the sea of depression.

Having banished sugar from my diet for six months, having dismissed all chocolate cravings, having accepted sucrose-deficiency depression as a part of my life, I heave myself on to the weighing machine. The loss is less than half of my target. How did I set the target? It was by looking at the copywriter’s idea of a fat human, someone who looked exactly like me.

The year is over now. I have lost a little weight and gained a lot of depression. I have to make a resolution now for the next new year. This time I know what it is – to lose the depression. The copywriter can go to hell.