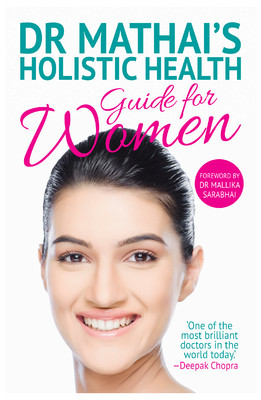 Dr. Mathai’s Holistic Health Guide For Women serves as an introduction to holistic healing, giving us a peak into the different dimensions of holistic health.

Reviewing a health guide is a somewhat challenging proposition. For one thing, I am not a health expert to judge the accuracy of the content. Apart from that, ploughing through pages and pages of facts about every conceivable illness – some of which I have yet to experience and some which hopefully I shall never have the misfortune of experiencing – is a rather boring job. However, for the sake of you, dear reader, I persevered.

Dr. Isaac Mathai is a holistic health expert based in Bangalore, who has more than 2 decades of experience in holistic healing.  Although his Holistic Health Guide explicitly states that it is for the women of today, I felt that the focus on the target audience is not clear and the book commits the grave mistake of trying to speak to everyone at once. For instance, the whole section on adolescence and behaviour with the opposite sex, actually attempts to talk to teenagers of both genders, dispensing advice on things such as peer pressure, infatuation and the importance of trusting and confiding in parents. Additionally, the book spreads itself too thin by covering a range of diseases and disorders, many of which can affect both men and women. Further, the food items that are suggested for various illnesses range from certain types of roots and herbs and leaves which I would assume would be hard to find abroad, to salmon and blueberries, which I would think are hard to come by in most parts of India.

Another gripe I have with the book is that, at times, it seems like marketing material for the author’s holistic health centre, Soukya. All the testimonials by celebrities such as Deepak Chopra and Deepika Padukone, sing praises to Soukya and nothing is mentioned about the book. There are photos of famous personalities at Soukya; even the foreword by Dr. Mallika Sarabhai is all about the doctor and his health centre!

One small thing which I did find heartening however, is the fact that as the author broadly segregates the different stages in a woman’s life, he gives the average marital age as 25, an improvement to earlier times when 25 was considered too late for women to get married. I think it also gives us a hint that the book is for modern, educated and independent women – someone, say, who can afford a stay at Soukya (although I must confess that I have no clue how much their treatments cost, but I am willing to bet that they are not cheap!).

The majority of the book is easily understandable by a lay person and one is not assailed by a whole lot of medical jargon. Nevertheless, there are a lot of homeopathic and ayurvedic medicines and treatments that have been mentioned, which I have no clue about. Examples: Rhus Tox, Lepam, Pichu, Vasti… What are they? Can one purchase them over the counter? Where does one find them? I don’t know. So what does one do? Turn to Google, which somehow defeats the purpose of having this book in the first place, right? Plus, a lot of the advice on healthy living in the book are really common sense and things that we probably know already – eat a balanced diet, maintain a healthy weight, keep stress at bay and the like.

In one case, the author uses the example of a young bachelor to illustrate the havoc we wreak on our digestive systems by constantly eating out and partying. I was almost afraid that he was going to say that getting a wife should help him eat properly, but thankfully he says, “I confronted him and told him that his singlehood had become a crutch for him to justify wrong eating habits.”

I noticed a number of mistakes that sharp editing should have fixed. For example, is it bael leaves or bale? Two places have two different spellings. Another one, “… she applies another quote of the red lipstick purchased on the sly.” One section talks about “Bloatedness” – is that even a word? Isn’t it just “Bloating”?

There are also inconsistencies which could have been avoided with better attention to detail. Some of the patients have their surnames mentioned and some don’t. Are they real names or have the names been changed to protect patient confidentiality? Nothing has been mentioned. Some of the yoga illustrations, state the benefits of the particular asana at the bottom of the page while some don’t. I don’t mean to nit-pick but maintaining uniformity would have given a more polished and professional feel to the book.

One interesting piece of information that I came across was the statement that men have a higher resting metabolic rate than women, which means they burn more energy while at rest than women. How unfair, don’t you think!?

So do I only have complaints about this book? No, not really. All of us tend to turn to Google when we notice something amiss with our bodies, but who can say that the information we find online is trustworthy? In that sense, it is indeed nice to have a reliable guide from an expert source at hand, to which we can turn to if and when the need arises. I particularly liked the yoga postures detailed in the book, which are accompanied by detailed instructions as well as pictures and this made it simple and easy to follow.

If you’re planning to purchase Dr. Mathai’s Holistic Health Guide For Women do consider buying it through these Women’s Web affiliate links at Flipkart or Infibeam.

Who Needs A Gluten-free Diet In India?