Unusual career changes are happening all around us; one such story, of an engineer who teaches Indian classical dance. 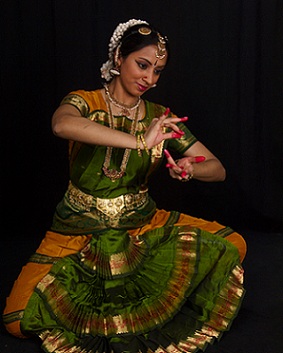 Unusual career changes are happening all around us; one such story, of an engineer who teaches Indian classical dance.

Graduating with an Engineering degree from a premier institution, working in the glass and chrome environs of a software company and later moving to the US – Swathi Kamakshi Ravi’s story seems similar to that of many young women today. But instead of building up on a career in computers, she chose to shift gears and follow her childhood passion- Dance, specifically Bharatanatyam.

At that time, she felt that this decision would help her be more in control of her time while simultaneously making her feel more alive and she welcomed the change. While doing her MFA in Bharatanatyam she discovered an intense liking for Indian history and also realized the misrepresentation of the same due to insufficient knowledge and awareness. She decided to use dance as a medium to talk more about India and spread awareness about its diverse culture.

This is precisely what she has been doing, by conducting workshops, demos, giving lectures and performances as well as training students – of Indian origin and otherwise. She especially loves working with children and choreographing thematic productions on social themes relevant to contemporary issues.

Though her family has been extremely supportive, she faces various challenges and barriers when speaking about a culture totally alien to her audience. Talking about the origin and relevance of the Bindi, the pantheon of Hindu Gods or anything Indian/Hindu can be bewildering for some who have no prior contact with Indian culture, but Swathi feels that it is important for with in-depth knowledge of Indian heritage, one can explain it successfully.

Wanting to contribute more constructively to society, she has also started reaching out to juvenile rehabilitation centres. It can be tough to have a group of young boys and girls staring at you blankly, but Swathi tries to interest them with the concept of the navarasas (9 emotions) of Indian Aesthetics and some Indian folk movements to grab their attention before she gets into Bharatanatyam.

Maintaining the balance between one’s family and a satisfying career thousands of miles away from family and support in India can be demanding, let alone a career change to a radically different field. Doesn’t she miss a secure pay cheque at the end of the month? Interestingly Swathi says that she does not – as a well-planned career shift can eventually bring you the same if not better returns. (Ascertaining financial risk while planning a career move or break is important too).

And witnessing her students from different nationalities, races and socio-economic backgrounds, crossing cultural and social barriers and uniting on stage under the beautiful canopy of Bharathnatyam, Swathi finds her inspiration and motivation to move forward with confidence and panache.