A Calendar Too Crowded

Sagarika Chakraborty’s A Calendar Too Crowded has its ups and downs; nevertheless it stands by womanhood and speaks out unflinchingly. 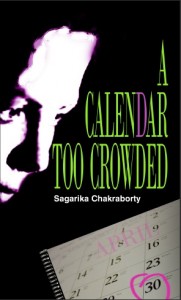 Sagarika Chakraborty’s A Calendar Too Crowded has its ups and downs; nevertheless it stands by womanhood and speaks out unflinchingly.

A Calendar Too Crowded has an interesting and unique theme. It is a collection of short stories and poems around notable days of the calendar that are dedicated to women or women’s issues. Thus we have a poem on gender selection for the Anti-Selective-Abortion Day which falls on October 25th, a story about oppression against widows for the International Widows Day on February 2nd and so on.

The characters in each story are nameless because according to the author, “No name would justify a voice which represents millions.” The stories touch upon the lives of women from various walks of life, regardless of economic or social disparity. This highlights the fact, that all women, regardless of money, education, upbringing or looks are connected with one another, by the common problems that they have to face every day.

This aspect is beautifully depicted in the story for World Breast-Feeding Day (August 1st), where a blue collar labourer and a white collar worker, both worry about being able to provide enough nourishment to their respective babies, while juggling work. While each might have different reasons to go back to work and differing support systems (or lack thereof), the story still manages to bring out the angst of every new mother at the end of her maternity leave.

Most of the stories ring true, because as women, most of us would have had similar experiences or atleast heard about such incidents. For instance, reading the June story for Anti-Eve-Teasing/Molestation Day, ‘Naked’, gives one a sense of déjà vu, as it is strikingly similar to the controversy surrounding the recent Kolkata rape victim and people’s reactions to it.

On the other hand, I felt that the September story, ‘Knowledge Beyond The Printed Letters’, showcases a woman who is the epitome of the humble-calm-composed-ever-loving-all-satisfying-over-achieving-homemaker-and-career-woman-all-rounder superwoman stereotype! The protagonist in this story, looks after the needs of her husband, kids, in-laws with great attention to detail, yet is not ‘just a boring housewife’. She has several accomplishments to her name, but never boasts or even talks about it unless forced to. And after a long and an eventful day, she ensures that she is a dutiful wife, mother and bahu as, “…She packed his bags, ensuring that he had all that was essential for a comfortable trip, checked on her children and lovingly doted on her mother-in-law…”It made me want to roll my eyes!

Additionally I could not totally grasp the ‘An Equal Friendship’ story, which unfolds as a letter from Panchali to Krishna. Although I am aware of the broad story of the Mahabharata, I am not too familiar with the nitty-gritty of it. Therefore when Panchali compares the events of her own life to the state of women’s equality today, I could not completely comprehend though I did get the basic essence of the story.

The book uses simple and easily readable language that is at times, quite thought provoking, as in, “She asked me whether I have ever wondered why a prostitute is ashamed of what she does all her life, but the society is never ashamed of what it has done to her?” Having said that, Sagarika’s prose reads better than her poetry. The verses almost appear like lines of prose that have been forced to rhyme!

A Calendar Too Crowded is a good attempt for a debut novel. Despite having a few flaws, it indeed seems to be a promising start.

If you’re planning to purchase Sagarika Chakraborty’s, A Calendar Too Crowded, do consider buying it through this Women’s Web affiliate link at Flipkart. We get a small share of the proceeds – every little bit will help us continue bringing you the content you like!