Influencer Lakshmi Devan Stalked On A Recent Solo Trip Says “To Hell With Anyone Who Thinks I’m ‘Asking For It’!”

I was told that I shouldn’t have travelled alone since I’m a woman. I shouldn’t be “so open” on LinkedIn. I was asked why my Instagram profile was public when it had pictures of me in a swimsuit?

In this great country of ours, we have raised stalking to a fine art. It hasn’t been very difficult, given that so much of Indian cinema has completely normalised it, even glorifying stalking as ‘love’. Romance, we have learnt, is incomplete without an element of stalking – just pick a random playlist of ‘romantic’ Bollywood songs, and I can bet a very large number are all about stalking the woman you ‘love’ and she ‘has to become yours’.

Add to this malaise the utter lack of consent we Indians believe in – in fact, consent has never been a factor in any of our interactions – not just romantic. We wouldn’t know it if it hit us on the head.

Of course, in a country where we eulogise a Kabir Singh who says things like – “Ye bandi meri hai” to deafening applause, we have entitled men who feel they have a right to any woman who may be in the public eye. With so many of us sharing our lives on social media, this gives them rich pickings, indeed. And then they act, and make life hell for women, especially if we ‘seem too forward’ and ‘asking for it’, like when we travel solo without a male companion.

As per this report based on the 2018 NCRB statistics, “Ranjana Kumari, director at the Centre for Social Research, an advocacy for women’s rights based in New Delhi says, ‘There are certain perceptions about stalking cases – they are not taken seriously by the society or by the police. Hence, it is not easy for women to go and report these cases. There is a lot of hesitancy involved [in reporting].’ These perceptions are further reinforced in popular culture, especially movies where romantic relationships often begin with stalking, added Kumari.”

Today, I came across a post on LinkedIn by one of the top influencers of India who is very vocal on issues of mental health, brand content creation, and workplace culture, Lakshmi Devan.

A stalker who wouldn’t take no

Lakshmi Devan shares that while on a recent trip to Goa, she was stalked and harassed by a person who tracked her down to where she was staying. And this, despite having not shared anything about where she was on social media. This points to this person having stalked her for a while and deduced her movements accurately – which is pretty chilling.

This person, she says, “refused to leave until I met them and accepted the gifts they’d brought for me.”

Like really? Just reading this has sent a shiver down my spine.

Lakshmi made a complaint and had the matter dealt with, but understandably, was frightened now. “…for the next 5 days, I was too shaken up to leave my room,” she says. “I barely slept. I triple-checked my doors and windows. I just ate take-out and cried myself to sleep.”

This is a woman who has made her mark in the world of business, works in the fields of brand content and marketing, and surely must have faced some tough situations, not someone unused to dealing with strangers. But this is something so primal – this breach of a sense of personal security.

On top of that, the incident was blamed on her. “I was told that I shouldn’t have travelled alone since I’m a woman. I shouldn’t be “so open” on LinkedIn. I was asked why my Instagram profile was public when it had pictures of me in a swimsuit?”

Brutal reality of every woman

Lakshmi Devan goes on to say in her post – “Here’s a huge f*ck you to everyone who has no idea what it is to live with rape anxiety and still won’t stop blaming women for gender-based violence.

Every woman I know has held her keys in her hand as she walked across the parking lot.

Every woman I know has made a fake phone call in a cab.

Every woman I know has had to enter a shop to avoid being followed at some point.

Every woman I know has had a man threaten her safety in some way when she said no to a date.”

Yes, every one of us knows all of this. It’s now second nature. And appallingly, this begins very early in every girl’s life, before she has ever tasted what it is to be carefree and happy – the tax she has to pay in this world just for having being born a girl.

If you look at the statistics on stalking in our mahan desh, in 2018, India reported 9,438 cases of stalking – one every 55 minutes, on average –  as per the National Crime Records Bureau report released in January 2018. This is more than double the cases – 4,699 – reported in 2014. If we look at the trends in earlier years too, though more cases of stalking and sexual harassment are being reported now, it is likely they are being under-reported. The tip of the iceberg.

“My heart goes out to all the women in the world today. Here’s a picture of me in my swimsuit and if you think I’m “asking for it”, you can go to hell. I don’t want hide anymore.” 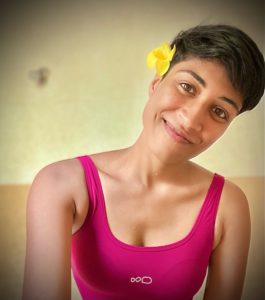 “Let’s share our stories and amplify our voices. Let the world know how it feels. Maybe then change will come.”