Apparently now, Indians have aam. And we have the Aamsutra.

Or so Slice tells us.

To the Indian, a mango is no aam thing. When it’s in season, we see mangoes everywhere. For example, when a Bollywood male-star-wannabe does the classic take-off-the-damn-shirt act, our netizens look at the man-boobs he has revealed and comment, ‘Those totally look like Dussehri aam.’

People float political parties with aam people in it.

Cool desis even call us mango people in a banana republic.

Mango is serious business, made all the more serious because the mango season is short-lived. So having year-round mango drinks competing for our tastebuds is completely logical. What is unique is the way they compete for our attention.

In 2016, the total value of the mango-drinks market was around `6,300 in India.5 From 1976 onwards, a sizeable share of the fruit drinks market has belonged to Maaza, which was owned by Parle and is now owned by Coca-Cola. Most players in the market have always tried to equate their mango drink to the fruit itself – as in, ‘Mango Frooti, fresh and juicy’ or ‘Laalach for aam, Maaza hai naam!’

When PepsiCo launched Slice in 1993, the brand needed to make its presence felt. It tried by being the ‘Real mango flavor’ and ‘A provider of simple joy’. Somehow, taglines like ‘Simple joy ka ras’ just did not catch on.

Then in 2008, Slice was relaunched with a new formulation and taste, a brand-new look with new graphics and packaging and a brand-new communication idea. The intent was to own the platform of pleasure of the aam kind.

All competing brands were talking about the deliciousness of mango and its flavour, which is what is special about the fruit. But what if you could highlight the pleasure of eating a mango? Mango-eating has always been the stuff slurpy, sloppy moments are made of. The task for Slice was to take the slurpiness and sloppiness into the realm of fantasy and build on the sensuality and indulgence of the experience.

It helped that the brand ambassadress decided on was someone the entire nation was Googling, YouTubing and generally heart-throbbing over: Katrina Kaif.

That year, to the land of Khajuraho, Slice gifted Aamsutra. Yes, the K was missing. And yes, that was the idea. Punny but true.

Aamsutra stayed true to its core idea over the years. Shot in classic seduction style, the commercials featured Katrina Kaif demonstrating the principles of ‘Aamsutra’ or the art of experiencing pure mango pleasure with the all-new Slice.

One television commercial shows Katrina with her hair blowing back sensuously as she arranges flowers and candles. There is an air of anticipation as she slowly settles down. Soon enough, it becomes evident that she is actually getting ready for the business of pleasuring herself – by drinking from a bottle of Slice. When she does, the shots are all about her indulging herself with the drink.

And then her boyfriend walks in, obviously thinking Katrina has been waiting for him. D-uh, little does he know… But, of course, he is incidental to the experience of Slice Aamsutra. Pure Mango Pleasure. 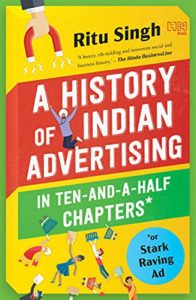 The ad was educative, to say the least. So that is how you eat a mango? Slowly and sensuously, while wiping off the juices? Like Katrina Kaif in the ad? Why on earth didn’t our parents teach us to languorously savour the fruit instead of letting us go greedily for the guthlee?

The communication pushed on with the theme – putting Katrina in a rainforest; Katrina in a bottle, underwater, breathlessly waiting to be rescued; Katrina eagerly waiting to meet fans who will find ‘her’ number under Slice bottle crowns.

Whether you agree with the idea of mixing mangoes with pleasure or not, there is no denying that the communication is seductively head-turning and clutter breaking, with fantasy being the primary theme.

Tiptoeing the line between sexual and sensual, the aim for Slice is still what it has always been – licking the competition.

Move over aam aadmi. As Katrina demonstrated, you don’t stand a chance against the aam aurat.

Excerpted with permission from A History of Indian Advertising in Ten-And-a-Half Chapters by Ritu Singh, published by Hachette India.

If you would like to pick up a copy of A History of Indian Advertising in Ten-And-a-Half Chapters by Ritu Singh, use our affiliate links at Amazon India, and at Amazon US.