Boys Don't Cry by Meghna Pant is an unputdownable story of a marriage made in hell. It is a story of abuse and crime and takes you behind the closed doors of a modern Indian marriage.

Boys Don’t Cry by Meghna Pant is an unputdownable story of a marriage made in hell. It is a story of abuse and crime and takes you behind the closed doors of a modern Indian marriage.

Trigger warning: This has physical and emotional domestic violence and may be triggering for survivors.

TODAY IS the day. The day that he will finally kill me. I hear the doorknob turning. I push my hand under the pillow. I feel the edge of the kitchen knife I’ve begun keeping under my pillow in case he attacks me. I tell myself to use it. To not be afraid. To kill him before he kills me. He enters the room.

‘My parents are leaving tomorrow,’ I heard him say. I didn’t move. I had to be close to the knife. ‘They no longer feel welcome in our house.’

I didn’t remind him that their tickets had been booked for this return date even before they had arrived. But I sighed in relief. There are some people who bring joy only when they leave.

‘You know they hate you now, right?’ he said.

Was he going to kill me over that? I thought of the kirpan. I should’ve thrown the damn thing out of the house. It was more dangerous than my kitchen knife.

I said I was sorry. I didn’t want to, but it could save me.

I heard him come closer. We know our abusers well. We know the sound of their footsteps. I put my hand on the handle of the knife and slowly turned my head around. My only chance at coming out of this alive was the element of surprise.

He was holding a cake in his hand. The chocolate fudge cake from Entenmann that he knew was my favourite. On it was a lit candle.

‘It’s our one-year anniversary,’ he said.

I let go of the knife. I had completely forgotten the date today.

‘Despite everything,’ he continued. ‘Despite all the shit that has gone down this year, I thought we deserved a moment to enjoy.’

I got up from bed slowly. I couldn’t believe we’d been married a year. Every moment of this year had been a century in itself.

‘We should celebrate by going to my university campus and throwing toilet paper at it,’ he said. He smiled.

I almost smiled back. I was so relieved. He was being nice. Was my man coming back to me? Was his bad phase over? Was he falling back in love with me? Was my patience paying off?

I’d been through so many unpleasant surprises that year that a pleasant surprise was something to accept, not question. Because getting curious about your own happiness was to watch it withdraw like a touch-me-not flower.

My relief turned to an overwhelming sense of guilt. What was wrong with me? Why was I so unhinged that a smile from him would make up for his emotional and physical abuse? Was it because what he was doing to me was not abuse? Maybe my in-laws were right. Maybe slaps and punches and chokeholds were normal in a marriage. Maybe people didn’t talk about it. What way was there to even know? I’d never been abused and never seen abuse in real life. No one had ever spoken to me about it: how to recognise it or how to fight it. I had no idea what to think anymore.

Suneet was still talking: ‘And we have those tickets from our Hawaii trip.’ On our way to Hawaii a few months ago––which seemed a lifetime away––we were given free air tickets after being off-loaded from an overbooked flight. ‘We can use them to go somewhere, maybe San Fran to meet Bharti?’ Bharti was his cousin sister, and the only person outside his immediate family whom he cared about. ‘We could stay with her. She really wants us to visit.’

He sat down next to me and blew out the candle. He cut a piece of cake with his hands and put it in my mouth. I looked into his eyes. His eyes were the colour of earth after the first rain. The colour of hope. Of the future.

If I didn’t respond quickly to his peace offering it would scare him off and I’d lose him again.

I didn’t trust my own decisions. Maybe I could trust his?

My voice seemed alien to me. I’d stepped into a time machine of love and fallen from its ferocious spinning into a life where I couldn’t recognize myself.

‘Great,’ I heard him say. ‘Book our tickets. I’ll speak to Bharti.’

I didn’t dare ask him what had changed his mind. Suneet was probably being normal because his parents were no longer here.

I didn’t care. I also wanted to feel normal again.

Then, I heard him say, ‘You know that I still love you, right?’

I was startled at this unexpected confession. What was there to love about me? I looked the way I felt: horrible. My lips were curled down. My neck was always throbbing. My skin and hair were listless. I wore shabby clothes. I’d aged ten years. I was lower than the faeces in a worm’s ass. 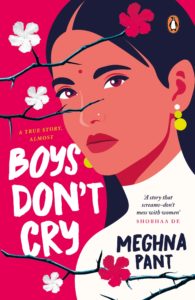 I had completely lost faith in who I was as a person.

I glanced in the mirror across my bed. I didn’t recognize the unhappy woman staring back at me.

‘I love you too,’ I said. I walked over and hugged him.

‘Let’s make a resolution to end this awful year on the right note, ok?’ he said. ‘Let me begin by telling you my future plans. I know you’ve asked me and I’ve not given you a reply.’

We finally discussed our future. He said he would retake his KMAT exam while looking for jobs. Since there was a global meltdown, he was not likely to get a job in the US, and was considering moving to either Dubai or India. This would mean us living close to his parents, or even with his parents. I balked at the idea, but what choice did I have? I told him I would move to wherever he wanted. He added that he wanted to get a fake MBA degree made for his job applications to companies in India. I balked again. But Suneet had been sitting at home for four months now doing absolutely nothing. Men needed to work. It was good for them. And it was especially good for their wives. I was desperate for him to get back on his feet. I was desperate for the kind of husband he’d be when the gloom and doom was over.

‘I’ll do anything that makes you happy,’ I told him.

But, despite that, the knife remained.

Like I said, I knew then only passion and none of its consequences.

Published with permission from the publishers Penguin eBury Press.

If you would like to pick up a copy of Boys Don’t Cry by Meghna Pant, use our affiliate links at Amazon India, and at Amazon US.

Image source: a still from the film Provoked and book cover Amazon