Last year when he posted a cryptic tweet, “Cheaters never prosper,” most people could put two and two together and figure out it was hinted at his ex-girlfriend Samantha Ruth Prabhu after her divorce with actor Naga Chaitanya.

If you dig into their history, you’d know that Samantha left this guy in the lurch because of his over-possessive ways. He probably termed it as “ditching him for greener pastures” even though there were alleged rumours of him cheating on her during their relationship.

But why not even if she did leave him for greener pastures! What’s wrong with a woman being ambitious and setting higher standards for herself, even in relationships?

It’s absolutely none of anyone’s business how many romantic relationships a woman has or leaves behind, including marriages.

Samantha Ruth Prabhu and Naga Chaitanya’s divorce was amicable. There’s no known news or evidence of cheating during their relationship.

Besides, there’s nothing illegal that Samatha Ruth Prabu has done by filing for divorce that Siddharth has to sit on his throne, play God and judge her for her actions.

I know he gave his usual clever a$# reply that he only talks about his life and not others, and neatly escaped the scene.

In another incident last year, when the actor was called the ‘Swara Bhasker of the South,’ he replied, “Just to clarify…I would happily be Swara from anywhere or anytime. She’s awesome and a cutie.”

While this might seem flattering at the outset, I found his choice of words problematic.

Is that all you reduce a person’s qualities to – Cutie? What’s even that?

Swara Bhaskar replied with an equally flirty reply calling him a “Hottie.” Ahem! Anyway, as long as they are both cool with it.

So the point that I’m trying to drive is that in reference to the Siddharth – Saina Nehwal tweet, Siddharth’s cocky comments didn’t come as a shock to me. 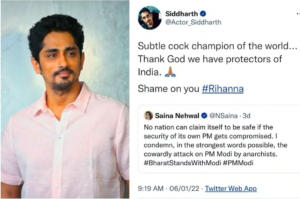 In fact, I found it a cheek that he thought he could get away with it as usual. And boy, did he try hard with his “not-an-apology” apology!

Why do men think it’s okay to publicly insult a woman in the cheapest and most vulgar way possible, especially if they think she ‘deserves’ it?

To justify his statement, “Subtle cock champion of the world” –

First, he tried teaching us, the general Indian public, also the second-largest English-speaking country in the world, English and the idiom “cock and bull.”

Next, how is Sidharth’s deliberate choice of words – “Subtle cock champion of the world” not disrespectful and maliciously intentioned whichever way you look at it. This guy seriously thinks that people can be easily manipulated with his ‘cutie’ charms.

It’s a free democratic country, dude! Everyone has the right to support any political party or leader. But it doesn’t give you the right to throw dirt on a woman’s achievements because you think she ‘deserves’ it. You can still make valid, powerful criticism without resorting to slut-shaming slurs to prove your point.

On that note, I’d like to laud Samantha Ruth Prabhu on getting away from him.