The Vital Importance Of Having Easy Access To Safe Contraception: Some Real Women’s Stories

Access to easy and safe contraception has opened up enormous possibilities, and has literally been the one thing that truly made way for women's careers and dreams to come true. Maybe why men want to control them.

Access to easy and safe contraception has opened up enormous possibilities, and has literally been the one thing that truly made way for women’s careers and dreams to come true. Maybe why men want to control them.

The need for sex is a huge part of being alive. At the same time, the world is no longer one where it’s acceptable that the consequences of inevitable sexual activity should be borne by only those who have the capacity to get pregnant – women, trans men, and other identities on the gender spectrum with a uterus. And of course, it is usually the cis het men who get away, literally, with the murder of the freedom and choice of the person they end up making pregnant.

A very short history of contraception

Contraceptive methods like coitus interruptus (pulling the penis out and away just before an orgasm) and barrier methods like sheaths formed from a variety of material (believe me you, animal bladders and intestines have been used in some historical accounts), and even vaginal pessaries have found their place in human history.

Modern contraceptive methods, however, have been around only since the 20th century, and probably one of the greatest of inventions in all of history. Finally, there was some light in women’s lives, who could now have a choice  to limit and space out children, as well as the option of living child free. This opened up enormous possibilities, and has literally been the one thing that truly made way for women’s careers and dreams to come true.

Again, contraception does not mean abortions. In fact, abortion should be the last option, even if easily and safely available. What we also need is sex education, easy availability of contraceptives without judgement and shame, and options for both women AND men – yes men need to bear their share of contraceptive responsibility too.

A lack of easy access to contraceptives in traditional societies

Traditional societies who frown upon pre-marital and extramarital sex, moral policing, religious strictures, state and national laws, and many other systems deeply rooted in a patriarchy have made access to contraception difficult and sometimes impossible. These usually are ideas that come from insecure men fearful of women holding their power – either of sexual liberation or educational and economic liberation, both precursors to political liberation.

The results look like the anti abortion laws, the shutting down of the funding of orgs like Planned Parenthood, the embargo on easy and free availability of contraceptives – like how emergency contraceptives were once unavailable in inward looking, traditional Chennai, and the lack of correct and timely sex education.

Then there are doctors who shame those who come to consult them for contraception, sometimes even refusing to take only the woman’s consent though the MTP law in India does not require her to take anyone else’s permission for an abortion – not even that of the child’s father.

All these factors together make it extremely difficult for safe and accessible contraception, which can show up as increased teen pregnancies, teen mothers, drop out from education, early marriage, even increased maternal mortality, abandoned babies, and a huge opportunity cost for women in their lives, setting them back even more.

So we asked our readers for their #IOwnMyBody stories of contraception, and some have honoured us with their trust. There are sad stories and happy stories, stories that make you angry, and also those that make you want to salute them. These stories come from all walks in life, and various ages, so they are. very diverse in some ways, yet have an unmistakable and recognisable thread running through.

Some of these are in their real names, and some under assumed names to protect their privacy. All real stories, though. 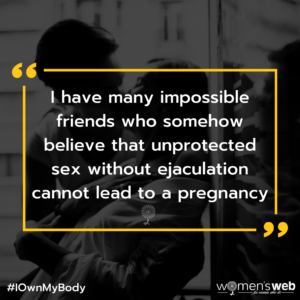 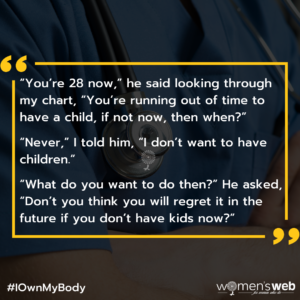 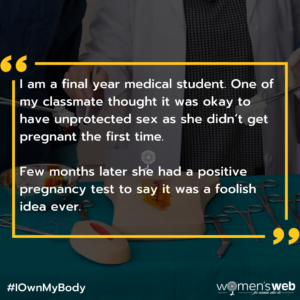 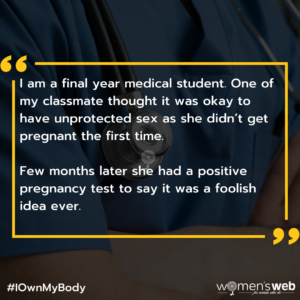 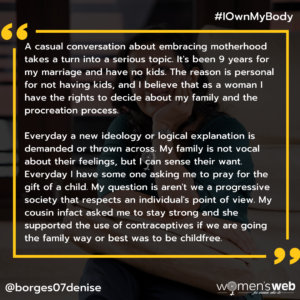 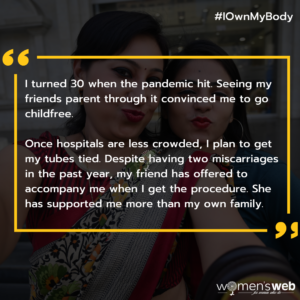 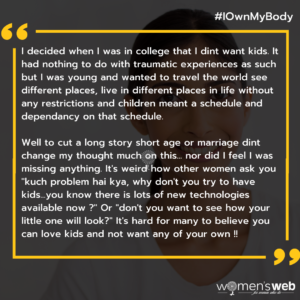 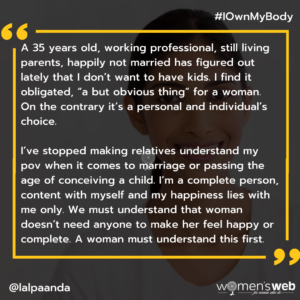 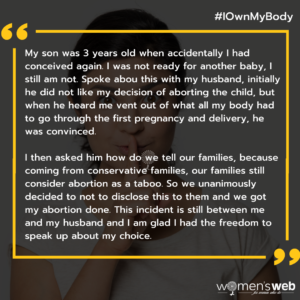 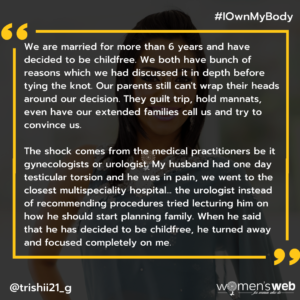 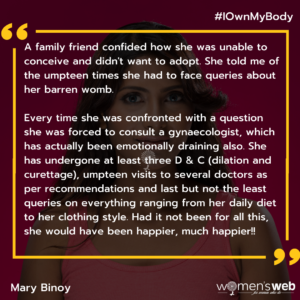 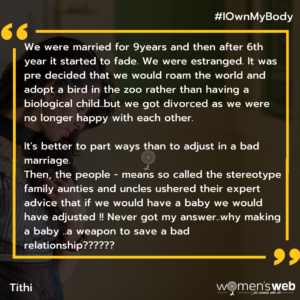 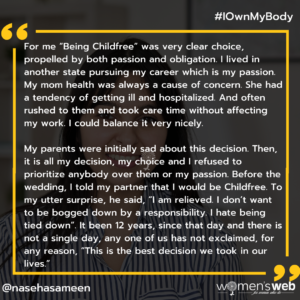 The last one is a poem, that expresses beautifully the heartrending reality of how difficult a choice abortion is… and shows the irony of all those draconian laws that try to control women’s choice and bodies, and of other gender identities who can get pregnant.

“The day I found out about you
I didn’t know what to do.
I broke down and cried
Because I knew I couldn’t have you.

Papa and Me went home that night
>More scared than ever.
I fell asleep holding onto you
And you made me feel better.

I woke up the next morning
Saying good morning to you.
I ate a full breakfast
So that you can be full too.

During the weeks, I kept you protected,
Kept you warm and safe from the unexpected.
As I laid holding my belly, looking at the moon,
I realized, my baby, that I have fallen in love with you.

My son, my daughter, my unborn love,
You are a gift sent to me and Papa from above.
I have learned a love like no other
And that’s the love between a child and mother.

Baby, tonight is my last night with you.
Tomorrow you will be with someone new.
His name is GOD and he is expecting you.
To my unborn child who I will never get to meet,
I hope when you’re in heaven
You will forgive Papa and me.

Thank you so much to all those who shared your stories.