My Mother Was An Amazing, Much Loved Woman, But Here’s Why I Refuse To Be Like Her!

Women should not and do not need 'allowing' or 'permission' to work, to pursue a hobby, to find time for themselves or to invest in their friendships. They deserve it just as much as men and kids in their families.

Women should not and do not need ‘allowing’ or ‘permission’ to work, to pursue a hobby, to find time for themselves, or to invest in their friendships. They deserve it just as much as men and kids in their families.

Born to a working mother and raised in a busy household I started noticing very early on that although my mother was a doctor, that too a gynecologist which is considered one of the busiest fields of medicine, it did not reduce her chores or responsibilities at home. From telling the help what to cook, to deciding the list of groceries to teaching and helping us with homework and managing the over all upkeep of our house, she did it all. She complained rarely but often she seemed rushed and tired.

As a teenager I could make out the strong woman and feminist behind the mother I saw, she stood her ground on some things that mattered to her but also many times she gave in to the expectations of family and society around her in general.

I believe that for the little that she put her foot down, in her day and age, even asking that was a lot. She had an image to keep even as lady doctor of a small town; she was supposed to be mild mannered, soft spoken, dignified and classy. Of course the definitions of what is classy and dignified was also predetermined by the society.

She was heavily praised by everyone who knew her, because while being a good and successful doctor, she also was skilled in managing the household, raising her kids, sewing beautiful dresses for her daughters and knitting sweaters for her husband, maintaining relationships with colleagues and in-laws alike. She was and is definitely an amazing woman.

‘What is your hobby, Mumma?’

Once, my sister and I were being reprimanded by her for spending too many days of our summer holidays reading novels and not pursuing any other activity. My older sister jokingly said to our mother that reading is her hobby and she enjoys it. She then asked our mother, “What is your hobby Mumma?”

It was an innocent question but it triggered something in our mom. She snapped, she was upset that her daughter is asking her about her hobby. Maybe it made her realize that we don’t know her hobbies because she doesn’t have time to pursue one! She concluded her irritated rant with a statement that stayed with me for a long time.

She said “running constantly in the race of life, doing everything for others so they are taken care of, I have no idea when all my hobbies and passions got left behind. Now I am asked what my hobbies are!” She cried that day, probably the first time I ever saw her cry. I and my sister had no idea what had happened. We kept going over the conversation with each other trying to figure out what was so wrong in a simple question.

We got our answers slowly as we began to observe more around us and grew up into young women ourselves.

The reality of my mother’s life

Even though our mother was financially independent, and was equally busy and successful as our father who also was a doctor in town, she came home to a family waiting for her to take care of them.

My mother carried a mental workload of things to do heavier than a mountain. She couldn’t complain because she had an image to maintain to be loved as she was, and also because she herself did not know that it was unfair. She was raised in an era that made her feel grateful that her father allowed her to study, her husband allowed her to continue to work. She also, fortunately, had household help to support her, and for their time, a very ‘understanding and accommodating’ husband.

Do you see? All a husband had to do to be ‘great’ was to be accommodating and supportive of his wife’s career. A working wife, on the other hand, had to do everything great in order to be ‘allowed’ to have some control on her life.

My father was actually very supportive when it came to her work, odd hours, late dinners, whatever it meant,… he never fussed about it. But at the same time, he did not take on any extra responsibilities at home either.

This skewed way of living was normalised for us

All parents who allow inequality in their relationship are teaching their sons and daughters that this is the norm and it is okay. When a woman is being praised for being ‘selfless’ and ‘living only for her family’, it actually reinforces the idea that women should not prioritize their own needs and wants, or find time for their hobbies or passions, should have no life of their own once they are married or become mothers.

Society should stop celebrating sacrifice from women as ‘great’

Looking back, I realize how my mother let go of so many important events in her life. Like her medical school’s silver jubilee reunion, medical conferences, certain occasions in her own family too, because she prioritized a terminal exam her kids had, or some other occasion at her in laws’ place.

What she needed to do (and my father also to reinforce) was to discuss with us about why it was important to her. That her friends from college and the reunion was important for her. That medical conferences kept her updated on new innovations and changes in her field.

My mother was, unfortunately, socially conditioned to decide that her wishes, her friends, her conferences should always be sacrificed when it came to familial needs. Others in her family or circles too did not urge her to change the mindset. Believe it or not, she was always the more evolved one anyway. Society did praise and appreciate her for her dedication.

Society needs to change now. It needs to encourage women to seek time for filling themselves up, soaking their hearts up into their passions and hobbies, tell their children and family what matters to them, invest in their friendships, create family of relationships where others hear them and sacrifice at times for their needs. The mothers and wives should also be heard, given back their rights, and encouraged to live fuller and passionate lives.

It took me a few years to set the tone in my own family regarding my personal needs. Earlier, I felt grateful that I could keep my friendships before my marriage intact even to this date, that I could get away for a weekend a year with my friends, that I could choose to prioritize my hobbies during my free time. But gradually, I do not feel ‘grateful’. I feel enlightened that it is not something to be grateful about.

Finding time to read books, pursuing things that make me content, stating my needs, letting my family know what is important to me is not selfish.

As a person, woman, wife and mother I deserve it as much as my husband and kids do. My husband does not feel grateful when he naps on weekends. He knows he can, and he that deserves to claim his resting period after a busy week. I want my kids to be raised in an environment where they know that women and men have equal claim to their needs and wants. Especially as boys who will grow up to be men, husbands and fathers; they will not expect a selfless wife, but rather a wife with hobbies, passions, important relationships and events she cares about.

Women should not and do not need ‘allowing’ or ‘permission’ to work, to pursue a hobby, to find time for themselves or to invest in their friendships. They deserve it just as much as men and kids in their families. Women are amazing, they love selflessly, give whole heartedly but its time they give some of that love to themselves also. 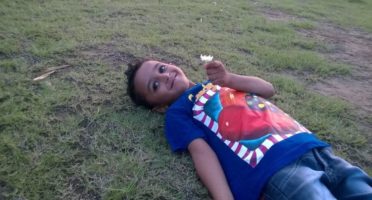