While the new Malayalam film Sara's is primarily about a woman’s right to abortion, the film centralises a woman’s ambition and even attempts to normalise it.

While the new Malayalam film Sara’s is primarily about a woman’s right to abortion, the film centralises a woman’s ambition and even attempts to normalise it.

Because of the reviews I was already aware that the central theme of the film Sara’s (2021 Malayalam language film, Prime Video, English subtitles) was a woman’s right to abortion and I had mild anxiety over how it would be presented. Till the very end I was terrified that they would end up glorifying motherhood and the divinity of the foetus.

All I can say is that the film surprised me.

A sharp young woman who knows her mind

The film opens with a school-going Sara kissing her boyfriend in a classroom and later in the day asking the self-same boyfriend to fuck off because he is already making plans for their marriage and consequent children.

He walks away in shock that she doesn’t want her womb graced with his future children and when a piece of egg falls out of the egg puff he is eating. Sara caustically remarks that he doesn’t want a whole puff, only the egg within it. This is my most favourite thing about Sara in Sara’s. She is super sarcastic and no injustice misses her sharp eyes.

Sure about her career before any ‘settling’

Later as a 25-year-old working as an AD on a film set Sara is very clear-headed, she has written a film script and is single-minded about getting it made before committing to her boyfriend.

We have had enough women characters who sleep with men because they are ‘fast and loose’ and this is their idea of a ‘modern women’ who then are expected to, and finally become sanskari in embracing wifedom and motherhood. But not Sara. Even when she sleeps with her boyfriend, she is out recceing for locations for her film and he’s the one tagging along, with little or no jealousy or insecurity. And it’s she who insists that he use protection.

A partner who aligns with her ideas on (not wanting) motherhood

Ultimately Jeevan the boyfriend convinces her that he too never wants to be a father and he will never come in the way of her ambition and much to the joy of the entire family they get married.

Two years fly by. Jeevan grows from strength to strength in his software career even as Sara struggles to find a producer for her cinematic baby. But she never gives up the dream and Jeevan plays her ever supportive chief cheerleader. Once when post marriage the family brings up the topic of ‘good news’ Jeevan asks his mother to back off saying it’s Sara’s body and Sara’s choice.

Yet just as Sara’s dreams are about to come true and she finally finds a producer for her film, she also finds that she’s pregnant.

Jeevan, who had insisted all along that he is such a progressive man, suddenly decides that he’s ready for fatherhood and that Sara is being selfish by refusing to postpone her dreams for the baby. Particularly when it would make ‘everyone’ so happy. Sara lashes out, “What about my happiness?!”

To be honest, I was very worried at this point. I was sure she would eventually be “taught the error of her ways” and she would be shooting the film with a baby strapped to her hip because “women can have everything,” right? That motherhood is as important as her career and if women do all the work of child-bearing, rearing, a career, they would be given the title of superwomen.

In despair over her imploding marriage, Sara calls her father, asking him for advice and he tells her that he trusts her to take the decision that is right for her. 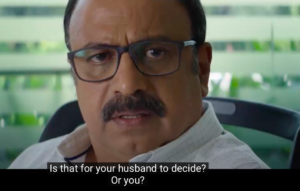 Later at a counselling session, the gynaecologist tells them that nothing good comes out of an accident, that it is better not be a parent rather than a bad one. He brings up the important 1971 MTP act, that gives a woman complete autonomy over her body and her reproductive system. That a woman doesn’t need to consult anyone over an abortion, not even the impregnator.

Sara’s is a quietly revolutionary film on many levels. While primarily it is about a woman’s right to abortion, the film centralises a woman’s ambition, even attempts to normalise it. We have enough films glorifying the normal biological, reproductive functions of a woman, but we have rarely if ever had a film that focuses on a woman achieving her career goals, not as a rebellious shrew who needs taming but as a serious and determined professional.

I love how the film constantly demands more of the male characters than it does of the central female character. Sara’s father and husband-to-be are chill about her multiple boyfriends. They are super supportive of her ambition and her career. In one particular scene where she calls her father apologetically after missing many of his calls, all he tells her is he understands that she was busy at work. I wonder if a father has ever said to a daughter on screen before?

If I have one complaint then it’s how the villain in Sara’s life is the stereotypical controlling, bible-thumping Mother-in-law and it takes enlightened men- Father, husband, gynaecologist to actually facilitate her life. That said perhaps this film was addressed to all men to wake up and be true partners to their women or get out of the way.

Sara’s entirely rests on Anna Ben’s petite shoulders, everyone else serves mainly as supporting cast. As the redoubtable Sara, Anna infuses so much energy and vitality into the part that you cannot separate actor and character.

Each time I see Malayalam films it’s with a latent sense of despair that we are so far from making such films in Bollywood. Even though civil society in Kerala is perhaps no different than the rest of the country in terms of the patriarchal stranglehold, at least there are a few filmmakers who are attempting to change the narrative. Jude Anthany Joseph the director of Sara’s is one such. Bravo.